Charlotte, NC – Over a hundred people were arrested following protests over the police killing of Keith Lamont Scott in Charlotte in 2016. Activists argue that mass arrests were made, and charges were filed, in an attempt to get people off of the streets during the uprising, and that the District Attorney never had evidence or intent to prosecute.

Earlier this year, Unicorn Riot interviewed glo merriweather and Ke’ala Lopez about glo’s upcoming trial for the felony charge of “Inciting to Riot” and misdemeanor “Assault Govt Official/Emply” that had been scheduled for August 13. Glo had been charged as a result of their participation in protests after the police shooting of Keith Lamont Scott in September 2016. Also discussed was glo’s support of Rayquan Borum. Borum has been charged for allegedly killing Justin Carr during the protests, glo witnessed Carr’s death and says Carr was killed by the police.

“Three or four days after the uprising I found out I had warrants out for my arrest.” – glo merriweather

The charges had claimed that merriweather and other protestors rioted by creating a “public disturbance” by blocking traffic, breaking windows, looting, and causing damage to public property in excess of $36,000. The District Attorney also dropped charges over claims that protestors assaulted Sgt. Peter Hildenbrand. Harris went on to explain that,

“even outside of the uprising, this this is not uncommon in Charlotte. Many were first time offenders and took a plea to get their charges dismissed but had to take pay over $100 for a court-ordered class, which is a form of punishment.”

The uprising in Charlotte began the afternoon Keith Lamont Scott was shot and killed by an officer with the Charlotte-Mecklenburg Police Department (CMPD). Although North Carolina is an open-carry state, CMPD officers claimed that they shot him because they saw him with a gun. Organizers and activists contest this and say that Keith Lamont Scott waited in the same spot every day for his daughter after school.

After Scott was killed, protests continued late into the night and were met with riot police. During the following day of protests, police escalated their tactics and another black man, Justin Carr, was shot in the head, and died, in the middle of a large group of protestors.

Police claim Rayquan Borum is responsible for the death of Justin Carr. However, this is highly disputed and many witnesses believe the police committed the murder. Neither the Charlotte-Mecklenburg Police Department (CMPD) nor Assistant District Attorney Clayton Jones, who is handling Borum’s case, have released what information or evidence led them to suspect Borum. Borum has been incarcerated since Fall of 2016 and is awaiting trial this December.

In the video, merriweather described watching Justin Carr’s death and witnessing riot police shoot the fatal shot. glo merriweather described standing next to Carr when they saw a line of riot police step out to shoot what they believe were rubber coated steel bullets, one of which they say hit Justin Carr in the side of his head, killing him on the spot. They, and others around, tried to stop the bleeding and carried him up to front of the Omni Hotel to try and get him medical help.

Darlene Harris, merriweather’s attorney, shared that the discovery of the evidence that the state did possess was very limited. Along with a lack of evidence, the charges against merriweather were also dropped because the lead charging officer said he would not be able to recognize merriweather. Harris says that it seems that merriweather was being made an example of because glo was one of the most vocal people who had a presence not just on the streets, but also online.

“They wanted to point to someone that they could say started all this, and unfortunately this was glo.” – Darlene Harris, merriweather’s defense attorney

King Mills, another defendant from the Charlotte uprising, has had his trial date postponed to November 3. Mills’ Facebook live video stream of the hours immediately following the police killing of Keith Lamont Scott has been viewed over 2.2 million times, and was credited for bringing people into the streets to protest. Organizers with the collective Charlotte Uprising, which formed during the protests, say this is why Mills was targeted by law enforcement, put on house arrest, forced to wear an ankle monitor, and placed in jail.

Keith Lamont Scott was the father of two children. Justin Carr became a father after his death and Rayquan Borum became a father after being incarcerated. Many activists in Charlotte argue that Borum is being targeted as a scapegoat by the police. Glo merriweather has been splitting their defense funds with Borum to help prepare for his upcoming trial.

Watch the interview with glo and Ke’ala below. Merriweather speaks vividly about some of their experiences during the Charlotte Uprising, including Justin Carr’s death, being targeted by the police, being charged with felony inciting riot, and their court case. Lopez speaks about Hawai’i’s sovereignty, the legal cases they battled, world building, and being there for their partner during ups and down. 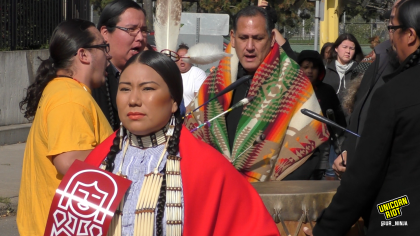 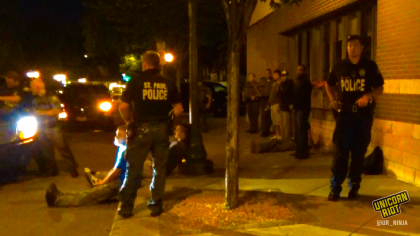