Philadelphia, PA – The third day of the Democratic National Convention was the most contentious thus far. Seven people are being federally charged after breaching the gates of the DNC and dozens more were arrested for bypassing security to protest the super-delegate system.

Unicorn Riot was live (signal permitting) on and off throughout the night. We were also live-tweeting.

"Thank u for sitting-in, your sacrifice will help us win" crowd outside thanking civ-dis action by @DemSpring pic.twitter.com/frZVgz4t7x

Large groups of people representing a wide array of political ideologies were once again congregated at the gates of the security perimeter. This created quite a mix of tactics. Some were burning sage and singing, others were burning flags and yelling. A group walked a coffin representing the DNC around the crowd on a candlelight procession and tossed it over the security fence.

As Bernie supporters chanted “let us in” at the security gates of the DNC, a group of protesters allegedly used bolt-cutters to open the gates. As a number of protesters raced through police lines into the convention area, a small group of self-proclaimed pacifists worked with police to target protesters; punching, kicking, and shoving, until the civil-disobedience action was put to a halt. Seven people who crossed through the gates were arrested on federal charges.

After the gate action, radicals shook the fence and burned American flags. Unfortunately, two of the ‘pacifists’ were burned as they attempted to stamp out a small flag burning fire.

To watch the aftermath of the gates live, see below (the signal dropped when the gate was flooded, and resumed a couple minutes afterwards).

As the night continued, a group of people sat down, sang songs, held hands, and prayed for a political revolution, while others chanted for freedom.

100s have sat down in street outside the DNC security fence. #DemsInPhilly #DemConvention https://t.co/3hddgOMoqZ pic.twitter.com/fhOmB56c0Y

During the duration of the night, we interviewed quite a few folks on our livestream, including Jewish Rabbis from Jews United Against Zionism.

Standing at the gate by himself with a sign that read #IAMSETH, was a man who came from Tulsa, Oklahoma to speak about DNC whistleblower Seth Conrad Rich, who was murdered in Washington D.C. two weeks ago.

The rest of the night ended without incident as many people dispersed back to their tents at FDR park or back into the city of Philadelphia.

Click on this link to watch the rest of Day 3 from our livestream. 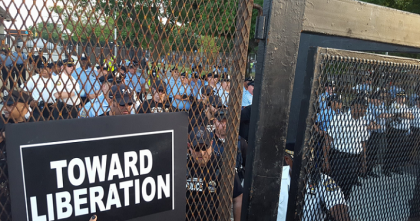 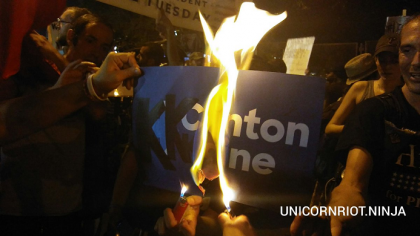