Morton County, North Dakota – An arrest warrant has been issued today, September 10, for Amy Goodman, an internationally renowned journalist who is the face of the popular online news outlet Democracy Now!

The warrant was discovered by attorneys who were inquiring as to the status of Cody Hall. Hall was arrested sometime yesterday afternoon while driving a vehicle on a road in the area of the water protection encampments resisting Dakota Access Pipeline construction.  Cody Hall is the media spokesperson for Red Warrior Camp, one of the camps in the overflow area across the Missouri river from the Sacred Stone Camp.  Hall’s arrest and the warrant for Goodman’s arrest would seem to signify local and state law enforcement following through on their threats to target and arrest those who they perceive to be leaders or organizers of the ongoing direct actions which have repeatedly halted the construction of the Dakota Access Pipeline.

After Amy Goodman, anchor and reporter for Democracy Now!, reported from the sacred site of the Standing Rock Sioux where Dakota Access pipeline “security forces” were caught on camera unleashing canines and mace against water protectors, including a pregnant woman and children, the State of North Dakota issued a warrant and a criminal complaint against her for criminal trespass, a Class B misdemeanor, carrying a maximum penalty of 30 days in jail and a $500 fine or both.

Mariel Nanasi, part of the legal team representing people at the encampment, stated “The State of North Dakota has begun to issue warrants and complaints against persons exercising their first and fourth amendment rights. Amy Goodman is being charged with criminal trespass because she was reporting and filming the destruction by the Dakota Access pipeline of the Sioux’s sacred sites and people’s response. When the security forces unleashed dogs and mace on unarmed civilians the DN! report went viral and was viewed by more than 4 million people all over the world. The State of North Dakota continues to escalate their harassment of people, including reporters, and to intimidate them from participating in peaceful protest and the defense of their land and water.”

PDF of the arrest warrant paperwork for Charles Cody Hall and Amy Goodman:

If you have more information about the Dakota Access Pipeline or similar projects, please contact [email protected].

[Cover art is based on Wikimedia Commons asset] 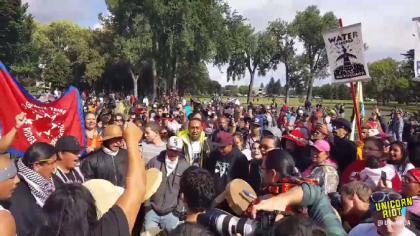