Jamestown, ND – Emails obtained by Unicorn Riot through a public records request to the North Dakota Department of Corrections and Rehabilitation (ND DOCR) raise questions about the deployment of personnel from various state agencies to protect the Dakota Access Pipeline from the water protectors who have been staging direct actions for months.

In September of this year, April Anderson of the Stutsman County Sheriff’s Department sent out an email with the subject “Time sheets” explaining the paperwork for law enforcement logging overtime hours after working #NoDAPL protests. (The Stutsman County Sheriff also loans out the MRAP armored vehicle, often seen in use by SWAT officers near DAPL sites).

In response to April Anderson, a man named Tyler J. Falk wrote in an email:

“I’ll ultimately be paid by the oil people dealing with the protests. I’m guessing when all of that is finally over and the dust settles, the oil company is going to want all the paperwork for reimbursement. I figured I should have some formal form instead of writing hours on a napkin (smiley face). Thanks.” – Tyler Falk

The “oil company” Falk refers to would appear to be Energy Transfer Partners (ETP)  or its subsidiary, Dakota Access, LLC.  While no direct evidence of ETP or DAPL financing police has yet emerged, this email sent by Falk shows that some North Dakota law enforcement personnel think of themselves as working on the pipeline company’s behalf.

A 2013 briefing from a North Dakota State Supreme Court case identifies Falk as a probation officer working in Jamestown, ND (where the Stutsman County Sheriff is headquartered).

“ETP has not provided funding to any law enforcement agency or state agencies. They do, from time to time, allow a law enforcement officer to fly in their surveillance helicopter along with the pilot.” – Cecily Fong, PIO NDDES

When shown the specific email in question sent by Tyler Falk, Fong replied:

“My guess is this is wishful thinking. I know of no mechanism through which we would be reimbursed by the pipeline company.” – Cecily Fong, PIO NDDES

Tyler Falk’s “wishful thinking” about being being “paid by the oil people” appears to have been validated earlier this month, when Energy Transfer Partners CEO Kelsy Warren told CBS that his company has offered to cover law enforcement costs incurred while policing #NoDAPL water protectors. The CBS news segment shown below ends with the reporter saying

“Warren told us the company wants to reimburse the state of North Dakota and Morton County for millions spent so far for protests and security, but that authorities have not yet accepted his offer.” – CBS reporter Mark Alpert

Both North Dakota and the Morton County Sheriff denied receiving any offer of payment from Energy Transfer Partners in statements made to ValleyNewsLive. 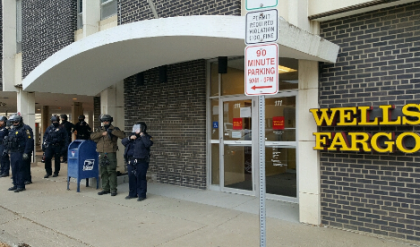