Cleveland, OH – The third day of the 2016 Republican National Convention began with news of a morning visit by FBI agents and local police to a house in Elyria, OH that had been hosting protesters from out of state.

We spoke with Rod Webber, who was present at the home that the FBI and police raided:

Federal agents and police entered the home without a warrant and woke sleeping residents up at gunpoint. Livestreamed video from the encounter shows an FBI agent aggressively asking people questions about who they were associated with and repeatedly inquiring about past and future attendance at protests.

Additional video (below) taken inside the house clearly shows law enforcement entering and searching the home and yelling at sleeping protesters to “get up or I will get you up”.

Agents from the FBI, Homeland Security, DHS, and ICE as well as local (Elryia, OH) police were present, and all eventually left the home without making any arrests or issuing any citations.

Later in the morning, groups of Immigrant Rights protesters and community members from across the globe took part in an action called “Wall off Trump“. Demonstrators held over 1,000 feet of fabric art symbolizing resistance to the Mexican border wall that Donald Trump is promising in his platform speeches.

We spoke with the organizers and artists of this action. Videos below.

Protests and counter-protests continued in downtown Cleveland on Wednesday, with different groups taking to the streets as the Republican National Convention got into full swing.

Seventeen protesters were arrested outside a secure RNC entrance gate as someone attempted to burn a flag and a brawl ensued.

Video of the incident posted to youtube shows police trying to put out the flag almost as it was lit. At no point in the video can anything or anyone other than the flag itself be seen catching on fire.  Attorneys for arrested protesters told Cleveland.com that the arrests for flag-burning were unconstitutional and never should have happened in the first place.  At least one journalist was arrested in the area of 4th & Prospect where police say they ordered the crowd to disperse.  Jacquline Greene, coordinator for the National Lawyers Guild who has been present providing legal observers, told local media:

“We alarmed at how the protesters were treated by the police.  We had 10 legal observes there and none of them heard a failure to disperse order.”

Police then pushed a large, tightly congested crowd that included delegates out of the area by the entrance gate, and continued using bike line tactics to herd people throughout the nearby streets as they transported arrested protesters.

Police are pushing the crowd of #RNCinCLE protesters and delegates east and west down Prospect from 4th pic.twitter.com/1pRJcMZvjV

We observed a group of about 12 people being loaded into a police arrest transport.

After the chaos in the streets near “media alley” subsided, different groups of protesters milled around Public Square and the surrounding streets. These groups were closely watched and followed en masse by many different roving teams of police.

Throughout the afternoon, a small group of anarchists repeatedly walked and ran around city sidewalks, leading police into deploying large numbers to follow them.

Various small protests from different groups continued into the night, along with celebrations by RNC-goers taking place amongst constant patrols from dozens, if not hundreds, of mobile police units.

We concluded the night with some interviews outside the RNC security gate, in an atmosphere that many described as “a circus.”

We will providing coverage today as the RNC concludes before we leave for Philadelphia, PA to cover protests outside the Democratic National Convention.

Click here to watch all of our day 3 LIVE coverage from downtown Cleveland. 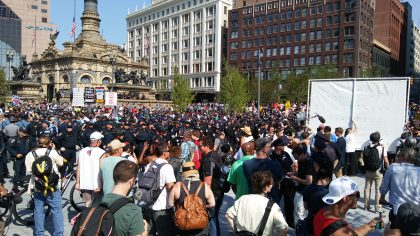 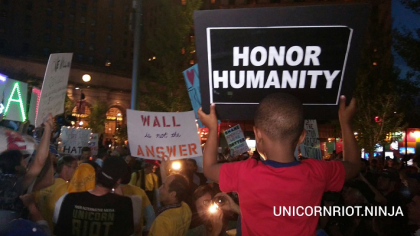