Bismarck-Mandan, ND – Around noon on Monday, a group of over 100 water protectors from the pipeline resistance encampments converged to blockade the Memorial Bridge, a piece of highway connecting the cities of Bismarck and Mandan.

Water protectors chanted “Mni wiconi! Water is life!” and held banners against the pipeline as motorists honked and police started to gather in the area.

After police ordered people to clear the roadway, the water protectors chose to march down Main Avenue towards Bismarck rather than remain on Memorial Bridge and risk arrest.

Water protectors have cleared the highway bridge and are now marching towards Bismarck up Main Ave https://t.co/zcDC9sOoZx pic.twitter.com/ebK5MHkCgA

The march continued several blocks further until it was stopped by a large line of riot police from the North Dakota Highway Patrol, Bismarck Police Department, and other agencies.

The Bearcat and MRAP armored vehicles, now a regular feature at any #NoDAPL protest in North Dakota, were also present.

Our reporters, who were documenting this situation from a public sidewalk, were repeatedly ordered by Bismarck Police officers to move away from the positions in which they were filming, despite being nowhere near police lines.

.@BismarckPolice aggressively escorted our journalists from public walkway from which we were filming- did not answer any questions #NoDAPL pic.twitter.com/Pz4U5GAtsu

Unicorn Riot was live for the highway blockade, the street march, and standoff that followed.

Watch the full stream below:

The crowd then reconvened at the Morton County Memorial Courthouse in Mandan, ND, where Democracy Now! journalist, Amy Goodman, had announced she would be turning herself in after the the state’s attorney of Morton County filed ‘riot’ charges against her. These charges come after charges of criminal trespass were dropped on Friday, the 14th.

The charges against journalists are nothing new, as Unicorn Riot has had four of our journalists charged with alleged criminal trespass for reporting on #NoDAPL actions.

Several water protectors who had been arrested during direct actions against DAPL so far also had court.

Officers in riot gear were very aggressive about threatening water protectors as well as reporters with arrest if they “blocked” the alley outside the courthouse, despite police having already blocked traffic to this alley themselves.

At least one person was arrested outside the courthouse for allegedly stepping into the alley.

The crowd eventually received the news that the “engaging in a riot” charge against Amy Goodman had been refused when the Judge found there was no probable cause.

BREAKING: Criminal charges against Amy Goodman were dismissed today, based on no probable cause. #NoDAPL pic.twitter.com/Ba8RFavhEt

Morgan and Marcus Frejo, who had been facing felony charges based on their alleged presence at a #NoDAPL demonstration on September 3, had their charges dismissed as well.

Unicorn Riot was live from the gathering outside the Morton County Memorial Courthouse:

Unicorn Riot is actively researching the many ongoing court cases resulting from arrests of #NoDAPL water protectors in North Dakota. We will provide updated legal information as we receive it, and will continue to provide updates from the front lines.

To see Unicorn Riot’s media from August until present, see below: 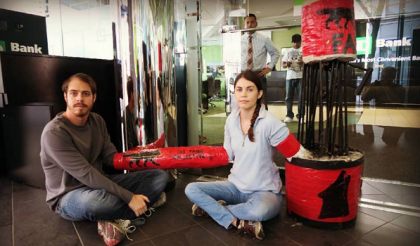