Minneapolis, MN – On the evening of September 7, 2017, dozens gathered on the University of Minnesota (UMN) Minneapolis campus and marched in an open show of resistance against rape and fraternity culture during the fraternities’ prime recruitment week.

Individuals had been invited to gather at 9pm on the East bank of the Minneapolis UMN campus to “Start off the school year right and dance against the frats and capitalist heteropatriarchy!” Members of the Unlawful Assembly Marching Band were in attendance to provide live, mobile music for the dance party.

As the band began their first song people started dancing and walking on the sidewalk down SE University Avenue, heading down “frat row” the location of the majority of fraternity houses near the UMN campus. The group quickly took to the streets behind a large pink banner, its message “Kill Rapists” emblazoned in large black glittery letters and accompanied by images of a chef’s knife and brass knuckles.

The group turned north immediately after Zeta Psi fraternity and then marched west on SE 4th Street in front of the fraternities located there. Chants included “Fuck the frats,” “Smash rape culture,” “Kill Rapists,” and “We’ll be back.”

This past week marked the beginning of the UMN 2017-2018 school year, as well as “rush week” when Greek letter organizations such as fraternities determinedly begin to recruit more members. As outdoor parties were being held in yards of most of the frat houses this past Thursday, fraternity members, younger prospective pledges, and others attending the frat parties were greeted by a small yet militant group of individuals who had a harsh message of rejection for the fraternities.

One of the organizers of the action (who wishes to remain anonymous) said to Unicorn Riot that the fraternities “basically promote a culture of protecting rapists” and that despite continuing revelations of survivors of fraternity rapes, the organizations have experienced little impediment to recruiting new membership or to their reputation.

This organizer also said that the aim of the militant march was “letting them know that this shit’s not gonna fly here” and that “they will always have to plan their events around resistance that will only escalate and grow in numbers.” Another organizer described the purpose of the action as resistance to fraternities as a whole because of many toxic aspects of frat culture:

They’ve been raping people, they’ve been a force of terror for people of color and trans folks, and we’re trying to tell them to get the fuck out and that they’re not wanted here.” – Event organizer

Seven years ago, in September 2010 the local chapter of the Delta Kappa Epsilon fraternity was the site of a sexual assault by one of its members, as were local chapters of fraternities Chi Psi and Phi Gamma Delta. DKE locally received a four-year suspension from its national headquarters as a result of the actions of its local membership.

Numerous fraternity chapters in Minneapolis alone have made the news much more recently with regards to sexual assault and rape culture:

After the Delta Upsilon chapter’s suspension, Minneapolis chapter adviser Don Powell resigned from his position. In an email Powell sent to DU international, his comments exemplify the rape culture that pervades fraternities. Powell appears to assert that a rape isn’t “real” if the victim-survivor hasn’t been battered or otherwise obviously physically abused; that victim-survivors are somehow responsible for their rape if they “dress provocatively”; that he has “never seen this big of ‘nothing’, blown up into ‘something'”; and that the sexual assaults in question weren’t to be taken seriously:

“Compared to some other fraternities at the U, our guys are choirboys!” – Donald Powell, former Delta Upsilon UMN chapter adviser

Since Powell’s email remarks have been made public, including that he would like “to slap [the victim-survivors who came public] across the face”, DU international has suspended his membership in the Delta Upsilon fraternity, about which Powell remarked “I don’t care.”

Locally there have been varied forms of resistance to toxic fraternity culture in the past year:

“They held the same event this year even after increased pressure and several public cases of Greek sexual violence. They need to do more than raising awareness.” – Danger Collective statement about the protest

It is not known whether the reporting rate for fraternity rapes reflects the actual rate. One aspect of Greek letter organizations is the pairing of like-minded fraternity and sorority houses. Survivors of sexual assault have been silenced by their sororities, prevented by their “sisters” from coming forward about their assault because of the fear of damaging a relationship between houses.

Another aspect of fraternity culture is the correlation between organization membership and positions of power within the capitalist political sphere. Though less than 5% of the United States population belongs to Greek letter organizations, a majority of current U.S. senators are members of Greek letter organizations, as well as all but three presidents since 1825 (44% of all presidents). A statistic popularized by fraternities themselves is that “approximately 80% of the top executives of Fortune 500 companies are fraternity men.” Universities depend on donations from alumni for their funding, and may be inclined to look the other way on accusations of misconduct of current student fraternity members in order to not risk jeopardizing their future funding.

When Unicorn Riot asked one of the organizers what they hoped the fraternity members learned from the march, they responded “I hope this scares them. I hope they think twice about ever victimizing anyone ever again.” 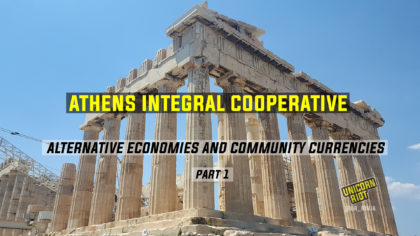