The Internet – On Sunday afternoon, the twitter account @AnonyInfo announced that they had “taken over” a subdomain of the website for the anti-Muslim group Act for America.

Act for America is mostly known for organizing yearly March Against Sharia rallies in cities across the country, which they use to promote the debunked conspiracy theory that Muslims are secretly plotting to replace America’s judicial system with Islamic courts. March Against Sharia events in 2017 mostly consisted of far-right Trump supporters, but also drew white supremacist groups seeking new recruits. The March Against Sharia in Denver last summer was attended by members of the neo-nazi Traditionalist Worker Party, who engaged in streetfights with counter-protesters.

As of Sunday night, a ‘shop’ section of Act For America’s website still appeared to have been defaced, and reads: “This page has been hacked by @AnonyInfo.” The hacked page tells visitors to enter the password ‘FuckNazis’ to then proceed to another page which contains various imagery associated with the Anonymous hacktivist movement, as well as messages such as “Good Night White Pride” and “Do Not Tolerate White Supremacist Domestic Terrorism.”

When we contacted @AnonyInfo and asked them why they chose to target Act For America, they told us the hack was part of a wider online operation against white supremacy on the internet:

We decided to target them for their anti-Muslim views which their organization is widely know for. #OpDomesticTerrorism is actively targeting any/all organizations who actively promote hate speech and white supremacist terrorism, which we believe is crucial at a time where @realDonaldTrump is in office.

Last year, Anonymous cyber-activists took down websites associated with the white supremacist group ‘League of the South’. More recent Distributed Denial of Service (DDOS) attacks under the banner of #OpDomesticTerrorism have targeted the websites of neo-nazi groups such as Anticom and Atomwaffen.

Act For America has not responded to our request for comment. 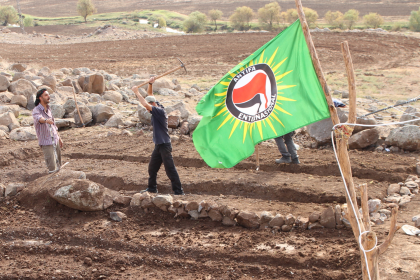 Building Autonomy Through Ecology in Rojava