Only two days later on June 4, the big rig was put up on the site as pictured below. Once construction is completed, the strip-mall-sized site will have 24 horizontal directional well pads and a pipeline.

While Extraction Oil & Gas escalates their construction, there is still an active lawsuit against the site alleging that the Colorado Oil and Gas Conservation Commission (COGCC) unlawfully approved the permit. The lawsuit was filed in April 2017 by a coalition of civil rights, environmental justice and community groups represented by the Denver University Environmental Law Clinic.

The lawsuit cites a ruling in March 2017 by a Colorado Court of Appeals, which ruled that the state can no longer put the interests of oil and gas companies above those of communities and the environment. The lawsuit alleges that the COGCC did not adequately assess the alternatives or the risks to community members, and that issuing these permits violates the agency’s duty to protect public health and the environment.

In the past six months there have been two explosions or fires at Extraction-owned active drilling sites in Weld County (where Greeley is located); including an explosion related to a liquid nitrogen line in the late evening of June 7, 2018.

According to Greeley, CO resident and teacher Therese Gilbert, even though three workers were sent to the hospital from the June 7 explosion, she doesn’t believe this will help slow down or stop the fracking construction near Bella Romero.

It seems like we have no recourse. We’ve done everything. We’ve tried all legal avenues. We’re just getting stymied.” – Therese Gilbert

Once the preliminary phases of construction at the site began a few months ago, the Denver University lawyers decided to ask the judge presiding over the suit, Judge Laff, to order a temporary restraining order on Extraction, so that while he contemplates how to respond to the lawsuit, construction would temporarily halt. However in early April 2018, Judge Laff denied the request.

On May 13, 2018, there was a Mother’s Day rally next to the fracking site for the community to unite and show their opposition to the project. Unicorn Riot was on the ground interviewing residents.

Megan Meyer, a Greeley, CO resident and mother, spoke with us about the environmental racism she and other community members believe is at play:

This kind of a project shouldn’t be by any school, it shouldn’t be by anyone’s home, it’s 24-well pad. And it was moved from a primarily caucasian school, a little more affluent… The company came in and decided it was too close to the playground, so they moved it here even closer to this playground, and it’s a low-income school, primarily Latino. I mean the racism is like blatantly obvious in this case.”

Gilbert spoke with us at the rally, as well. She has been an opponent to this project from the time it was originally proposed near Frontier Academy in Greeley in 2013.

After about a year and a half, we got the number of the wells lowered from 67 to about half of that and we pushed for the wells to be located farther from the [Frontier] school building. But because of pressure and the resources these parents had, the company backed out of the permit.”

Gilbert goes on to say,

This is not safe. There are statutory laws in some municipalities that don’t allow people to idle their car in the school parking lot for more than five minutes, and we’re okay putting 24 wells behind a school? It’s ridiculous.”

Ana Schultz, a Greeley, CO resident, mother and grandmother, told us at the rally:

I’m appalled that the companies, oil and gas companies, have this entitlement to infringe upon, you know, daily lives of peoples near homes and schools, and even nursing homes and hospitals, because they’re all around. And I think that they need to get a message that it’s not okay to have it, you know, where it’s an impact to health, and also the environment, and the animals.”

Patricia Nelson, a Greeley, CO resident, is the mother of a five-year-old who attends the K-3 Bella Romero campus a mile down the street from the 4-8 campus. She spoke with us while we were covering the rally, saying:

This sight would be one of the biggest sites within close proximity to a school, probably in the state, probably in the entire country… My son is five years old and so when he comes to the 4-8 campus, he’ll need to know what to do in case of an explosion, in case of a leak, so it’s just terrifying how my child has to worry about something like that.”

Shirley Smithson, a Greeley, CO resident and teacher who lives one-third of a mile from the fracking site, spoke with us at the rally:

Smithson went on to say,

The construction of the wall included doing some prep work on the ground, I don’t know what they were spraying exactly, some people say it was fly ash, other people say it’s something else, but anyway, there was chemical spraying on the ground… I looked over one day when it was windy, and there was a lot of dust spraying through the air while the children were out on the playground, so they’re already impacting, even though they say they’re being incredibly thoughtful of the community.”

The video below shows our footage from June 2, when the drilling equipment was being brought onto the fracking site.

Read our previous coverage of the oil and gas industry in Colorado here: 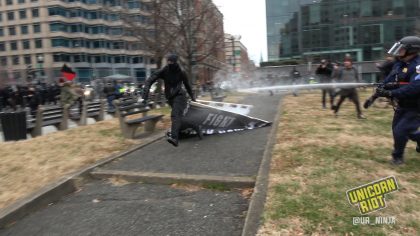