Washington, DC – On Thursday, May 31, a major blow was dealt to the federal prosecution of anti-Trump protesters mass-arrested during Inauguration Day on January 20 (J20), 2017. DC Superior Court Chief Judge Robert Morin ruled that the US Attorney had misled him by not admitting the existence of 69 additional pieces of evidence provided by the far-right “entrapment” group Project Veritas. Morin had previously ruled on May 23 that prosecutors had committed a ‘Brady’ violation by hiding edits made to an undercover Project Veritas video of a J20 protest planning meeting.

The US Attorney’s office also moved to dismiss several upcoming cases entirely in light of the court’s findings that they had committed serious evidence violations. All charges were dismissed against 5 defendants who had been scheduled to go to trial on June 4. Another trial group, originally scheduled to go to trial on May 29, saw one defendant have all charges dismissed, while the remaining 3 defendants in that trial group now face only misdemeanor charges after prosecutors dropped the felonies.

Just minutes after Judge Morin’s rulings for the May 29 and June 4 trial groups, closing arguments began in the ongoing second J20 trial. One floor below Morin’s court, in room 203, Judge Kimberley Knowles again declined to declare a mistrial despite her own ruling (echoing Morin’s) that the prosecution had improperly withheld evidence from defendants.

Assistant US Attorney Rizwan Qureshi made the government’s closing arguments, largely repeating the same phrases and rhetorical devices he used in his closing in the first trial. Qureshi dramatically told jurors that the defendants “agreed on January 20th to destroy your city.” After a step-by-step description of property destruction on Trump’s Inauguration Day, Qureshi turned his attention to each of the defendants. He spent several minutes focusing on each defendant and showed the jurors pictures and video of masked individuals in black whom the prosecution claims to have identified as the defendants based on correlating minor details in clothing.

Three of the defendants – Michael Basillas, Seth Cadman, and Anthony Felice – are alleged to have participated in property damage during the anti-capitalist black bloc march that left from Logan Circle and ended up being ‘kettled’ and mass-arrested at the intersection of 12th & L Street. Since no witness was able to positively identify any of the defendants as responsible for any acts, Qureshi’s arguments were the government’s only opportunity to name individual defendants as being allegedly identified in evidence exhibits.

Many blurry videos were shown, paused, and zoomed-in-on in slow motion, with Qureshi naming different defendants and claiming they were the person shown on the screen. The alleged identifications, which were made by Detective Greggory Pemberton poring over videos for the last year and a half, come down to details such as zippers on sweatshirts, strings on hoodies, details on glasses, and white smudges on pants. Pemberton himself was not allowed to make identifications of defendants in court based watching videos, meaning that only in the opening and closing arguments could the government name the defendants as the alleged “rioters” shown wearing black with their faces covered.

A fourth defendant, Cathseigh Webber, is also included in the trial group despite the lack of any allegations that he participated in any criminal acts. When addressing Webber in his closing statement, Assistant US Attorney Qureshi largely used the same language he had used in the first J20 trial last year, when all defendants (all of whom were acquitted) had been tried based on their “mere presence” at the anti-capitalist march. Qureshi told jurors that by attending the march and wearing black, Webber acted as part of a “getaway car” for people who broke windows and re-joined the protest crowd.

Once Qureshi had finished his closing arguments, each defense attorney took turns telling jurors why their client should be found not guilty on all counts. April Downs, defense counsel for Cathseigh Webber, repeatedly asked jurors why her client was even there, since the government wasn’t accusing him of any actual acts beyond attending the protest. She said the US Attorney was prosecuting Webber based on his “association,” pointing to the prosecution’s emphasis on his presence in a Facebook Messenger group chat tied to the Industrial Workers of the World (IWW), a radical labor union that endorsed the anti-capitalist march on Inauguration Day.

Lawyer Seth Schraeder, representing defendant Seth Cadman, made arguments attacking some of the central concepts of the government’s case. Schraeder mocked Qureshi’s claim that the defendants agreed to “destroy your city”, telling jurors “It’s not Godzilla destroying Tokyo.” He said Detective Pemberton “basically played God in this case,” and pointed out that Pemberton’s work could be influenced by his loyalties as an elected police union representative. Schrader emphasized there was no evidence Seth Cadman was a part of any conspiracy, since the government had no proof that he actually communicated with anyone at any time. He also contested the government’s claim that a person seen on various videos was in fact Seth Cadman, pointing out how there was “no attempt, really, to give an identification … there’s no forensic evidence … all we have is blurry pictures of someone who is dressed similar to everyone else.”

Matthew Rist, defense attorney for defendant Anthony Felice, began by reminding jurors that there was “not a single live witness” to identify Felice or any other defendant. He also asserted that DC Police did a “terrible job” collecting physical evidence after mass-arresting Trump inauguration protesters. Rist also pointed out that clothing and items reportedly used to identify Anthony Felice as allegedly involved in trying to break a window (a motorcycle helmet, a mask, a backpack, a water bottle, gloves) were not kept as evidence and weren’t analyzed for fingerprints or DNA.

Rist then zeroed in on the motorcycle helmet central to the prosecution’s allegations against Felice. Rist pulled up video of Felice’s arrest, showing Felice was wearing fingerless gloves. He pointed out that this meant that if the motorcycle helmet actually was tied to Mr. Felice, his fingerprints would be on it, but that no fingerprints were pulled from the helmet. The prosecution has repeatedly claimed that Anthony Felice was positively identified because of the motorcycle helmet. However, in his closing, Rist showed other motorcycle helmets that could be seen throughout the march, casting doubt on the government’s claims. Rist told the jury that “the government wants you to ignore all the gaping holes in their case … they want you to take that leap and just believe…. There’s no evidence; there’s a year and a half of speculative guesswork.”

The final closing argument from the defense was delivered by Billy Jacobson, defense counsel for defendant Michael Basillas. He told jurors that “the government has proved Michael Basillas was at the protest, and that’s all they have proved.” Jacobson cast doubt on Detective Pemberton’s work on the J20 case, telling the court that while Pemberton had “scoured the earth” for potentially relevant videos he “didn’t seem curious” about details regarding files provided by Project Veritas. Jacobson also pointed out the apparent lack of conclusive evidence against his client, Michael Basillas – asserting that since no witness actually identified Basillas, “argument from [Assistant US Attorney] Qureshi … is the closest we have to evidence.” Jacobson asked jurors to “distinguish between facts and argument” when deliberating their verdict.

Jacobson addressed different clothing & items the government claimed was the basis for identifying Michael Basillas as involved in certain acts. Jacobson showed jurors different exhibits that seemed to cast doubt on the government’s identification. For instance, prosecutors claimed to identify Basillas based on a white zipper on a black hoodie – Jacobson showed jurors arrest photos of ten other people with the same type of zipper. Another detail allegedly proving Basillas’ involvement in breaking windows is a pair of glasses – Jacobson showed jurors arrest photos of three other people who appeared to be wearing the same glasses. He also showed a picture of another person in the crowd who he claimed was actually the person in the grainy pictures the government claims show Basillas. After going over many other details such as Basillas’ bright yellow dyed hair not being seen in the prosecution’s evidence, Jacobson ended his closing arguments after telling jurors, “the government hasn’t come close to proving beyond a reasonable doubt that Michael Basillas is guilty of anything.”

After the defense finished closing arguments on behalf of each defendant, Assistant US Attorney Jennifer Kerkhoff, the lead prosecutor in the case, made the government’s final argument. Her rebuttal was mostly identical to her rebuttal in the first trial last year. Just like in the first trial, Kerkoff began by saying nothing as she played audio of windows being broken. When the recording ended she said “That is the sound of a riot … each of these defendants made the choice to participate in this riot.” Kerkhoff also repeated her statements from her rebuttal in the first trial where she claimed that protesters showed “privilege and entitlement” by expecting police to issue dispersal orders before making mass arrests.

After Kerkhoff finished her rebuttal, Judge Knowles dismissed jurors and told them they would begin deliberating the next morning (Friday, June 1, 2018.) Before court had quite ended for the day, Judge Knowles received a note from a juror, which she read in open court. The juror wrote that she had seen “Google jury nullification” written in a bathroom stall, and that she had Googled jury nullification and told other jurors about it. While this news was potential basis for declaring a mistrial, both the prosecution and the defense declined to take issue with it, and Judge Knowles said she would instruct jurors to continue deliberations as scheduled.

On Friday, June 1, jurors finished their first full day of deliberations and are scheduled to resume on Monday, June 4. The third inauguration protest trial, originally scheduled to begin on May 29, will now begin on Monday as well. The three remaining defendants in the third trial group now only face misdemeanors after the US Attorney announced they were dismissing and/or reducing charges against several individuals.

As of this writing, 7 more inauguration protest trials are still scheduled throughout 2018. It’s unclear how the court’s findings of repeated evidence violations by the prosecution will impact the remaining trials, but more cases could potentially be dismissed, or trial groups could be combined. 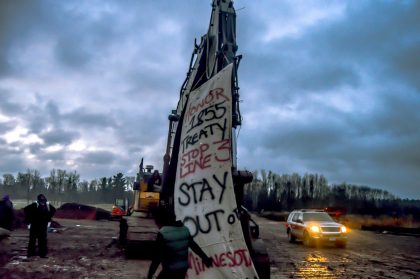