Minneapolis, MN – On Friday, February 2, 2018, an action at the Home Depot called on corporations to stop supporting oppressive immigration policies and create better wages and benefits for janitors. The action was titled ‘Super Bowl Protest: Tackle Corporate Greed‘ and organized greatly by Navigate MN “a non profit organization that builds power for immigration and education justice” and CTUL “an organization of workers and for workers, committed to securing fair working conditions for present and future generations.”

Unicorn Riot was live for this action. To begin our coverage of the Home Depot action, we interviewed Luciano, a retail janitor at The Home Depot and Ruth Schultz, an organizer with CTUL and about why the action was happening.

After about an hour long picket line in front of The Home Depot, the crowd of a hundred or so marched onto the street. Minneapolis Police engaged the group and spoke with protest marshals before they reached the near intersection of Johnson St. and said that they would protect the protest.

The crowd then took space in the intersection of Johnson St. and the entrance to Interstate 35 South, which leads towards the US Bank Stadium. Underneath a bridge near the interstate sat dozens of State Trooper vehicles and vans waiting in case the mobilization decided to attempt to take the interstate.

Elected politicians joined the picket line. While walking with the line, newly elected Ward 3 Minneapolis City Council Member, Steve Fletcher, who represents area from US Bank Stadium to the Northeast Arts District, and MN State Representative Ray Dehn offered to intervene if police acted aggressively. Their assistance in that regard wasn’t needed and they had conversations with workers while they all took space at the intersection.

The action was accompanied by the Unlawful Assembly marching band and while they took space at the intersection, speakers, including retail janitor workers and DACA recipients spoke into a microphone from the back of a truck.

“CTUL, Navigate, and other organizations are calling on the Home Depot, as a major corporation that benefits from low-wage and immigrant workers and customers, to make a public commitment to:

The protesters dispersed in several white vans after 5:30 p.m. The action finished with no arrests. Watch the livesstream below:

See the last action that Unicorn Riot filmed at The Home Depot here. 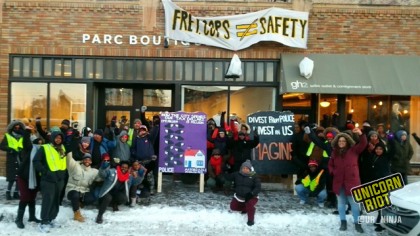