Minneapolis, MN – Water Protectors from South Dakota, Minnesota, Iowa, and beyond came to Minneapolis to demand that US Bank keep its promise to divest from oil and gas pipelines, including Energy Transfer Partners (ETP), the company behind the Dakota Access Pipeline.

Over one hundred Water Protectors marched and rallied on US bank headquarters in downtown Minneapolis during Super Bowl LII festivities. Indigenous representatives spoke of ongoing legal battles over pipeline excursions into their treaty territories and led the crowd in chants of “Water is Life.”

Waniya, from Standing Rock, stated, “We are here to say no more.” Waniya also thanked everyone who came to Standing Rock and “stood in opposition to a multiple billion dollar industry. We are still here and are still saying #NoDAPL. Water is life.”

The speakers were flanked by banners calling attention to Missing and Murder Indigenous Women and the escalation of trafficking near man-camps that are built along fossil fuel projects routes.

The rally and speeches continued for over an hour as Super Bowl volunteers funneled attendees around the wall of clearly marked protest marshals.

Joye Braun led a chant of Mni Wiconi, stated that “US Bank promised eight months ago that they were going to stop funding pipelines. They lied. They’re fork tongued liars. And we are standing here to hold them accountable for what they told us.” She then said, “That first night of Sacred Stone it was snowing, and it’s snowing today. This is water. Water is life. This water brings us life. This water is uniting the world.” Joye Braun also reminded people of the ongoing legal battles involving Standing Rock and the Cheyenne River Sioux Tribe.

Jasilyn Charger, from Cheyenne and Yankton said, “We come here to stand with our women, our women warriors our mothers. Our mothers are the backbone of the nations.”

“We came here to remind everyone that water is not a trademark, or an accessory. It’s a necessity and giver of life. Let me be the one to remind you to also break the cycle. Starting with our youth, to teach them, like this one right here. She’s learning she’s gonna get this knowledge. We take our youth everywhere we go: to divest, to protect, to defend.“

Daniel Grassrope then led the crowd in a chant “Break the Cycle.”

Holy Elk Lafferty said, “I come here today on behalf of my daughters, my mothers, my sisters, our grandmothers. On the behalf of our very first medicine, which is water. We’re in a time where we are being denied our birth given rights to half life to have health…”

The rally eventually moved away from US bank headquaters and held space on 10th Street and Nicollet Mall stopping traffic for a half hour. They chanted “Climate Emergency,” and “We don’t want it. Shut it down.” Crowds moved around the rally as people spoke more on the connections of man-camps and sex traffic that affect Indigenous communities along pipeline routes. The rally eventually ended with a march south on 10th Street behind a giant anti-pipeline banner that spanned the whole street.

The protest marked a sixth day of a week of protests that saw banner drops at NFL Opening Night, a march on the Minneapolis mayor’s residence, and more. Check out all of our Super Bowl coverage in the links below: 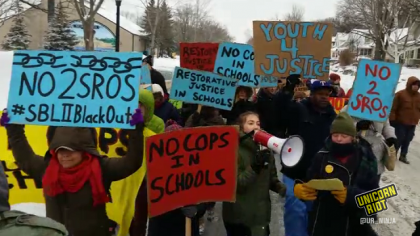