Sandusky, IA – Six people, including a Unicorn Riot journalist, were arrested during a direct action that halted construction crews for hours from boring underneath the Mississippi River to lay the Dakota Access Pipeline.

During some of the first arrests, a private security officer from On Point Security Group LLC was seen stomping on the back of a water protector who had already been handcuffed and was face down on the ground at the time.  We have reached out to On Point Security for comment on their employee’s actions and have yet to hear back from them.

While making arrests, On Point Security (employed by Dakota Access) stomped on a prone water protector who was face down in the mud. #NoDAPL pic.twitter.com/QgwRyRXXTw

Unicorn Riot was live to document the lockdowns from atop a nearby tree, with the understanding that the tree was on privately owned land, and that the landowner was allowing people to be present to observe DAPL construction.

Recently, construction crews set up fencing and employed extra security at the site where the Dakota Access Pipeline is set to be placed underneath the Mississippi River.

With a proposed pipeline finish date of October 31st, Mississippi Stand, a “group of concerned citizens who are working to keep oil out of the Mississippi River”, chose October 7th as yet another day on which they would take action to halt construction.

Unicorn Riot recorded video of the water protectors entering the construction site to lock themselves down onto the equipment:

Within an hour of the start of the action, one of those locked down to equipment was removed and arrested.

One person who locked to equipment arrested after pole they locked to was removed. One lockdown still holds. #NoDAPL #MississippiStand pic.twitter.com/8LHluvBogl

The other person attached to the horizontal drill bore was still locked down at the time our journalist Lorenzo was forced to end the livestream.

Police were using pain compliance on the last locked-down individual, when our journalist Lorenzo was approached by local law enforcement, told to exit the tree, and arrested upon descent.

Lorenzo is being charged with trespassing and has yet to be released from jail and expected to appear in court Saturday morning. We have reached out to the Lee County Sheriff’s Office for comment about their arrest of our reporter and they have not yet responded.  This is the third arrest of a Unicorn Riot journalist within the last month of our coverage of events surrounding the Dakota Access Pipeline.

The two people who locked down to the equipment were charged with criminal mischief, interference, and trespassing. The other four of the six arrests are being charged with trespassing.  These individuals are also expected to appear in court on Saturday morning.

Full livestream of the action here 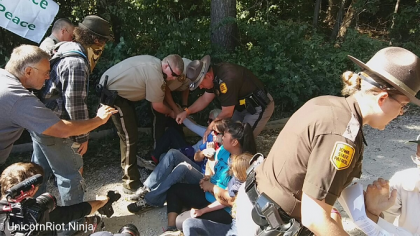