Lee County, IA – During two different direct actions on October 8th, water protectors blocked an access road leading to a Dakota Access Pipeline (DAPL) construction site where a horizontal directional drill is being used to bore under the Mississippi River.

Early in the afternoon, a crowd marched up the access road and sat in front of workers and law enforcement vehicles to block the road. Six people who had planned on being arrested in an act of civil disobedience were taken into custody.

Deputies from the Lee County Sheriff’s office also arrested several people from the crowd. They appeared to be randomly grabbing individuals and arresting them as they attempted to clear the access road.

We are aware of at least eight arrests but cannot confirm the final number at this time. Lee County Sheriff’s deputies and troopers from the Iowa State Patrol were observed using pain compliance techniques on people who had locked themselves together by their arms and sat down in the road.

After dispersing from the access road, the group moved to an area on the side of the road where they remained, cooking food and playing music.

Later that evening, around 7:30 p.m., a truck belonging to Michels corporation, a construction contractor building the Dakota Access Pipeline at this site and several others, was traveling down the same access road that the earlier arrests were on.

Several individuals ran in front of the truck, bringing it to a halt, allowing a woman named Jessica, a member of IWW GDC and the broader Black Lives Matter movement, to attach herself the bottom frame of the truck using a lock box device.

Lee County Sheriff’s deputies and EMS arrived on the scene approximately 20 minutes later. After about two hours, they were able to remove Jessica by dismantling the drive shaft to which the lock box was attached.

Before they extracted and arrested her, Lee County Sheriff’s deputies drove a cruiser between Jessica and the crowd, creating a visual barrier. After Jessica was extracted, the Michels truck continued to remain idle for about thirty minutes as workers reattached the drive shaft.

In the last 2 days, around 15 have been arrested during actions to stop #DAPL construction in #Iowa – #NoDAPL #WaterIsLife #MIssissippiStand pic.twitter.com/5OBlfdgN1j

Unicorn Riot was live for the lockdown:

These two blockade actions came a day after direct action affinity groups breached DAPL’s security fence, allowing two people to lock down to the horizontal directional drill, stopping work for six hours. Six people were arrested during this event, including one Unicorn Riot journalist. Read about that action here. 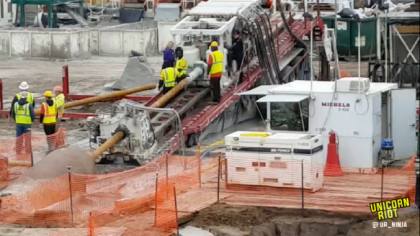