This action came a day after Unicorn Riot was in St. Paul, where we were live throughout the evening documenting the more than five hour march that took place starting at the State Capitol building.

As anti-Trump protests continued to sweep through the nation’s streets for a third night in a row on Thursday, Unicorn Riot was livestreaming during both the Minneapolis and Denver protests that shut down major interstates.

When march took off from rally it was to this song, chorus: “Fuck Donald Trump” – we are #live https://t.co/X3B9P0691i pic.twitter.com/MRERGv3qr6

In Minneapolis, the protest began as a rally on the University of Minnesota – Twin Cities campus. After a myriad of speakers finished, throngs of protesters took to the streets, marching down Cedar and Franklin avenues.

The march paused at the G.O.P. headquarters, located in the heart of the ‘liberal’ Seward neighborhood of Minneapolis and speeches were made. “F— Trump” graffiti was added in large letters to the outer brick wall of the building that holds G.O.P.’s headquarters.

From there, protesters marched down Riverside Avenue, where hundreds, maybe thousands, streamed onto the on-ramp for Interstate 94, effectively shutting down one of the main interstates in Minnesota for several hours.

Dozens of yellow- and orange-vested marshals were present, at least some of whom had never before served as a parade marshal. Most were faced towards the protesters yelling for them to stay in line and follow their orders for acceptable marching.

Minneapolis police officers, led by Deputy Chief Arneson, provided “safety” for the march route by blocking traffic and consistently communicating with the police liaisons utilized by the protesters.

While at least seven Minneapolis Police vehicles were leading the march, only two State Troopers were stationed at most entrances to the Interstate. In a metro that has seen six shut-downs of the interstate by protesters in the last two years, the State Troopers, who have commanding jurisdiction over the interstate, usually amass themselves in a heavier presence.

Shortly after the protesters took over the interstate, a motorist drove his truck into the crowd, hitting some people (video below). State Troopers stood idly by and, when confronted by the crowd, a Trooper standing a hundred yards away from the scene of the incident told them to “bring the girl here“, referring to a youth that was hit by the truck. The youth hit by the truck was okay and did not need medical attention that we know of.

Shortly after masses of anti-Trump protestors shut down I-94 in #Mpls, a Ford F150 drove right thru the crowd – slightly injuring a youth pic.twitter.com/7kJ70CmUzV

As time elapsed, a stand-off ensued near the Cedar Avenue exit, where a large assortment of law enforcement officers took positions on the interstate not allowing protestors to continue.

The officers ranged in departments from University of Minnesota Police, who provided officers on the front-line of the stand-off, to MN State Troopers, as well as Minneapolis, Anoka, and Fridley Police. Despite this heavy law enforcement presence, including police in riot gear and canine units, the police seemed reluctant to arrest anyone.

Anti-Trump protesters blocking traffic on both sides of Interstate 94. Sitting now. We are #live https://t.co/X3B9P0691i pic.twitter.com/myiX0aG3nK

This protest was organized, co-hosted, and endorsed by a large assortment of local ‘progressive’ groups. Spokespeople from some of these groups communicated with the marshals to make sure that protesters stayed inside the box that organizers were attempting to force people into, in efforts to “ensure everybody’s safety“. When people ventured outside of the box, marshals and some of the spokespeople quickly took efforts to herd them back behind the banners, truck, or the line of vested marshals.

After a couple hours of taking space and chanting, including a “Water is Life” chant in solidarity with #NoDAPL water protectors (see below), protesters voluntarily left the interstate and returned to the UMN campus.

#NoDAPL solidarity is shown as chants of “#WaterIsLife” reverberate off the concrete on I-94 during anti-Trump protest last night. pic.twitter.com/V3uJAeXzBZ

No arrests were made while on the interstate. As folks made their way back to the starting location of the march, Unicorn Riot interviewed some participants and community members.

Re Trump election "we need a fire under our asses – complacency and apathy was real… now we going backwards" https://t.co/zcDC9sOoZx pic.twitter.com/JQudTa0v7E

Live on Cedar Ave: "we need to write our own textbooks – the youth – people power" https://t.co/zcDC9sOoZx pic.twitter.com/23j7AJI5cU

To view the livestream of the Interstate 94 shut down in Minneapolis, see below:

Watch the videos below to view the full streams from Thursday night, the second of which contains the interviews featured in the tweets above.


Wednesday night, the night after the election, hundreds of protestors in St. Paul rallied and then marched, circling through downtown and University Avenue numerous times in an action that lasted over 5 hours.

Red, white, and blue America flags were burnt outside the State Capitol and the charred remains were carried throughout the night. The light-rail transit route was shut down for hours, as the march sometimes walked directly on the tracks.

Flags burn as hundreds protest #Trump in #StPaul – #live in at MN Stand Up to Trump’s Fascism rally/march https://t.co/uVM7Rb9udQ pic.twitter.com/eWucQQdcX4

The anthem of the last few days has been a song by YG and Nipsey Hussle called “Fuck Donald Trump“. This has been played consistently at these actions across the country.

Among the many chants, one of the most popular phrase of the night was “F*ck White Supremacy”.

As we started livestreaming, we ran into Tony Williams, who had this to say about what was happening,

“We elected a fascist to the Presidency in 2016, there’s no way people are going to stand for this.” – Tony Williams

Below are some pictures of the more than five hour march.

To watch this action as it occurred live, please visit this link. 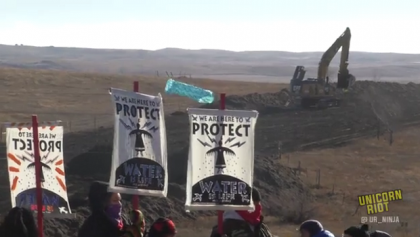 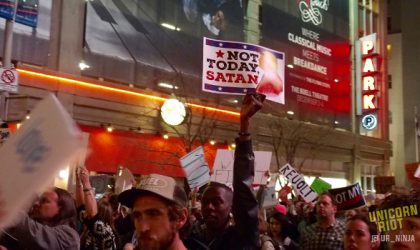