Denver, CO – On Thursday evening, along with many cities across the United States, including Minneapolis (with simultaneous live Unicorn Riot broadcasts), Los Angeles, and Portland protesters came together to rally against President-elect Donald Trump. An event was called to meet at the Colorado State Capitol and then march into the downtown business district.

At the highest point, an estimated 5,000 were marching; and Unicorn Riot was there to cover the event live. Chants rang out of “We reject the President-elect” as well as “My body, my choice” which was shouted by femmes marching and then echoed with “Their body, their choice” by others in the crowd.

The overall festive mood spurred expressions of solidarity and outrage against the bigotry, racism, sexism, homophobia and xenophobia that has been the mainstay of the Trump campaign. “Immigrants are welcome here” was also among the many chants and signs.

#DENVER March against #Trump thousands in the streets pic.twitter.com/hny1Q9lCrU

The massive crowd filled the 16th Street Mall in Denver’s downtown business district and the march itself carried through the streets for hours. The Denver Police tracked the march at a distance in squad cars, bicycles, and helicopters as they blocked off streets to keep traffic from reaching the protesters.

Later in the evening, the crowd gathered again at the Capitol and it seemed as if the rally would end; however, a large group decided to keep going and turned onto Colfax Avenue where bystanders and passing cars cheered them on.

The march eventually looped back into downtown and around 9:30 p.m. the crowd decided to move towards the on-ramp to Interstate 25 at Colfax Ave. and Auraria Pkwy.

There was a tense standoff with the police in a riot line and chants of “Let us through“. At one point, it seemed clear that DPD was given orders to fall back as they moved away from crowd and further up the on-ramp. Amidst cheering, the protesters moved further up the ramp but were stopped by a city bus and more police in riot gear.

A group eventually separated down a grassy bank onto a street that lead to a dead end along the highway. Groups of people started scaling the small hill up to the on-ramp and hopping over the concrete dividers onto the highway bringing traffic to a halt. Eventually police were able to make their way through the cars and the crowd headed back over the dividers, except for a small group that had been separated from the rest. People were quickly lowering down others over the side of the wall to safety as DPD shot pepper balls and sprayed what appeared to be CS gas on the crowd.

The crowd, now down to between two and three hundred, marched back to the Capitol. There were no arrests that we are aware of, but there were reports that someone was shot with a pepper gun. Overall, it appeared as if the DPD were under orders to allow the march to continue uninterrupted. 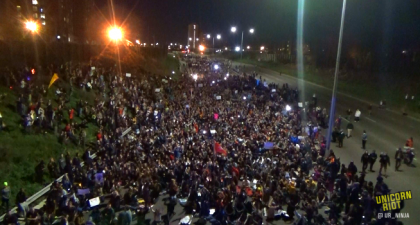 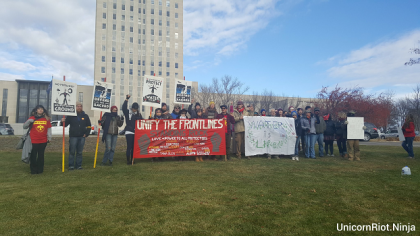