Yesterday the camps hoped their prayers would bring a good ruling over the injunction. Today, an all-camp logistics meeting was held in the kitchen area of the overflow camp.

The previous day it was announced that efforts were going to be made to bring everyone’s ideas to the table, and today saw the beginning of that process.

Vic Camp shares the news that the Federal injuction decision has been pushed back to Sept 9th. #NoDAPL pic.twitter.com/ugySdS9xKr

Kitchen, Security, Emergency Response teams and others took time to inform everyone of their goals, and roles. Each speaker spent time sharing the importance of this camp, and all the tribes represented there.

The camp was also given an update on what happened Wednesday at the hearing in Washington D.C..

According to part of the camps on-the-ground legal team, the judge said that he would try to make a ruling by September 9th, 2016. The language he used didn’t make the Sept. 9th hearing a deadline, and so he could decide, before, or after that date. The judge also scheduled an appeals date, September 14th.

Regardless of what’s decided by the judge, it’s assumed the losing side will appeal and that hearing date has been set for Sept. 14th. If Standing Rock wins an injunction, then Dakota Access LLC will file for appeal, and vice versa. None of these dates seem to set a certain timeline for a final decision.

Unicorn Riot also caught up with the on-the-ground legal team to ask if there were any legal bounds for work to be stopped at the Dakota Access Pipeline site.

We heard that construction has stopped due to the sheriff’s allegations that they could not ensure a safe environment. They said that the construction crews have no legal barriers for their proposed work, and can begin construction at this particular site as soon as the sheriff feels they are able to keep a “safe” environment.

Regardless of when this decision is made or not made, it is clear that the encampments’ residents plan to stay. This day marked the beginning of organizing the camps further to continue to their resistance to the Dakota Access Pipeline.

The prayers and gathering of the Nations continues to ensure that the Missouri River is defended against the Dakota Access Pipeline. 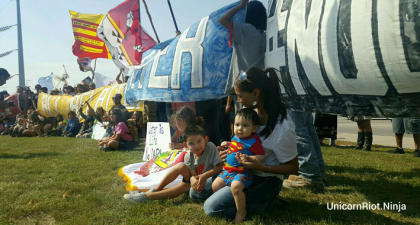