Opponents of private prisons cite inmate quotas, which create the contractual need for more prisoners in the system, and also cases like Judge Mark A Ciavarella, a judge who engaged in a bribery scheme and tossed juveniles into for-profit prisons to keep quota’s high. The protests disrupted the MN House hearing on the bill to reopen the notorious prison and caused a short recess and the room to be cleared, before the bill was passed onto the Ways and Means Committee.

Unicorn Riot was LIVE from the Minnesota State Capitol to cover the protest. Here is the press conference before the 10:15 a.m. hearing:

Inside the hearing, disruptions continuously occurred from the crowd preventing the completion of the testifying portion of those in support of the bill. The focus of the supporters was the 8-9% unemployment rate of Swift County and the need to reopen the prison to employ Swift County residents as well as the possibility of economically enhancing the region. Here is a small video of some of the disruption and the discussions and confusion afterwards:

The opposition stems from Rep. Tim Miller’s HF 3223 bill paving way for the state of Minnesota to lease Prairie Correctional Facility in Appleton ostensibly to reduce the overcrowding in the prison system.

So who is Rep. Tim Miller, the prison bill’s chief author? GOP Rep. Tim Miller (R-Prinsburg) from District 17A is a first-term legislator who defeated Democrat Andrew Falk in 2014. To justify his new HF 3223 bill, in January, Miller lied on his Facebook page about Swift County having the second-highest unemployment rate in the state. It is actually ranked 18th in highest unemployment.

In 2015, Rep. Miller was a critical player in trying to outlaw the Minnesota State High School League’s policy of accommodating transgender student athletes. Miller ignored rural economic issues to pursue a witch-hunt against young transgender Minnesotans. His homophobia has seemingly increased since when he entered House politics and some of his views have reportedly raised concerns from his own GOP caucus members behind closed doors. In recent weeks, Rep. Miller has also worked on undermining water quality policies.

House File 3223 is backed by many senior House Republicans, not just a fringe, the third sponsor is House Speaker Kurt Daudt, indicating their caucus is determined to go all the way on this.

Prairie Correctional Facility and the attempted profits: HF 3223 proposes the State of Minnesota’s Department of Corrections (D.O.C.) would begin to lease the Appleton prison. D.O.C. leasing private prison space is what the original bondholders of the prison, the Appleton Prison Corporation, have been calling for since 1993.

In 1993, IDS Financial Services Inc. of Minneapolis (now known as Ameriprise Financial), the largest bondholder at the time and one of the largest stakeholders in the private prison industry, pushed for the state to lease or buy the prison. IDS spokesman Mike Kennedy was quoted in an LA Times article saying, “the economics of the project are very viable.” (Coincidentally the Star Tribune just published a glowing profile of late IDS 1993-2001 chief executive Dave Hubers yet neglected to reference his prison profiteering.)

Prairie Correctional Facility in Appleton was built in 1992 from $28.5 million in town-issued bonds by the town-created, Appleton Prison Corporation. It is a massive complex and can confine 1,600 inmates. Appleton Prison Corporation defaulted on their bonds in the mid-1990’s and Corrections Corporation of America bought the for-profit prison. For a time Prairie Correctional Facility held inmates from states as far away as Hawaii, with bulks of inmates from Colorado and Minnesota. The prison was closed in 2010 due to a lack of inmates.

Further research on key CCA players: Researchers at Littlesis.org have shown major investors & hedge funds own giant blocks of CCA shares. Big sections of both party establishments are swinging into action to push this bill through, and it has been carefully framed to appear as if it aligns with the general cause of economic development statewide. Major labor unions have been pressured to support this bill although some noted below have come out against it.

Much of the CCA battle will play out on the Democratic side (SEE BOTTOM FOR A DFL LOBBYIST UPDATE): In the Unicorn Riot recap of the #StopCCA protest, organizer Mica Grimm (@micamaryjane) points out DFL-aligned contract lobbyist Sarah Walker has been supporting the CCA effort (here’s her registered client list). Walker de-registered as an official CCA lobbyist on Feb. 13, 2014, while her business partner at Hill Capitol Strategies, GOP-aligned Todd Hill, is still the local officially registered lobbyist. Todd Hill has roughly the same set of lobbying clients as his partner, Walker.

Sarah Walker has pushed for CCA lately, urging labor leaders into pushing for the reopening of Prairie Correctional Facility. Perhaps not surprisingly, Walker is also the highly visible, actively registered lobbyist for a number of organized, progressively posed entities, as well as big tobacco, lottery scratch-offs, a charter school astro-turf shop in New York, and Everytown for Gun Safety.

Here are most of her registered lobbying clients (full list here): Furthermore, elected officials in Minnesota, on March 14th, submitted an opposing bill in the Minnesota Senate, SF2768 which would ban private prison incarceration at the state and county level. Opposition to bill HF 3223 was steadfast and consistent in Tuesday’s hearing from the protest outside, to the disruptions inside, to the speakers in opposition giving their testimony. Tom Roy, Commissioner of the MN D.O.C., spoke out against the thought of privatizing prisons, saying:

“What we have is an illusion of control. We do not have any real control over a correctional facility that couldn’t be snatched from our grasp if the inmates had any cohesive identity. We divide and conquer and that’s basically the only way we can make it happen. If we lose that, they [inmates] could take over the facility very very easily.” C.O. Joe Broge

Corrections Officer Joe Broge spoke publicly in opposition to reopening Appleton at the rally outside (video below) as well as in the hearing (video & quote above). Among the many reasons to oppose the bill that Joe spoke of, one continually stuck out, the stretching thin of correctional employees who are already in need.

In the end, the opposition to the bill failed to prevent it from passing the Public Safety and Crime Prevention Policy and Finance committee with a 10-7 vote and moving onward to the Ways and Means Committee.

Here is the main livestream video of the #StopCCA protest:

UPDATE Sat 3/26: On Friday, the news broke that CCA has hired three more lobbyists in the last week. One of them being former Democratic US House Leader Dick Gephardt, who’s now registered to represent CCA in Minnesota. Since leaving Congress, Gephardt has amassed plenty of other clients as reported by Bluestem Prairie. 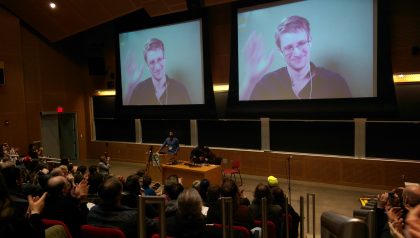 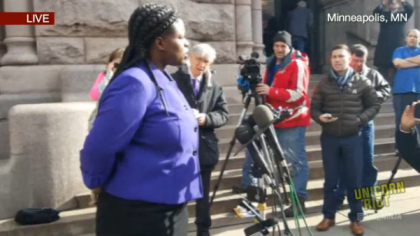