Prior Lake, MN – During the week of May 9th, students at Prior Lake High School (PLHS) attended classes adorned in dashikis, which were worn during a choir performance that took place the weekend before. Students posted pictures of themselves in the dashikis to social media and what followed was a conversation about cultural appropriation that quickly turned into a hate-filled social media war wherein Prior Lake students took part in the racially charged cyber-harassment of those in opposition of their photos.

Leading up to the aforementioned cyber war, on Saturday, May 7th, PLHS held its annual Celebration Choir, entitled this year ‘Celebrate! 2016‘ meant to celebrate ‘Screen Time: Songs from Movies, TV, and Video Games’.

During a segment of the concert that featured a rendition of South Africa’s Soweto Gospel Choir‘s song called “Baba Yetu” (originally composed for the anthem of the video game Civilization IV by Christopher Tin) students wore dashikis. A video of their performance can be seen here.

The Monday following the concert, choir students collectively chose to re-adorn the dashikis and post pictures on the internet. Many online viewers commented in disapproval and questioned the reasoning behind wearing the dashikis that most believed to be culturally appropriative.

Kids at Prior Lake High School getting their appropriation on; harassing and verbally assaulting Black students. pic.twitter.com/D2NuUEdhr5

Students’ and other online participants’ responses to the questioning of their motives turned quickly into racist slurs, disrespectful comments, and racist photos, one notably featuring a picture of a Black youth with hanging nooses in the background and the caption “Free shipping on swing sets”. Still, the conversation on social media seemed to primarily center on the true meaning of cultural appropriation. For instance, when someone from another culture appropriates cultural items, rituals, dress, etc. does it substitute for diversity? Does it necessarily celebrate the culture that originated it?

Historically, western colonialists have used the symbols, rituals, and artifacts of other cultures without attribution or recognition of the culture it is stealing from. Some may say that identity politics come into play when it comes to the question of cultural appropriation, but when the dominant culture in society appropriates objects from the oppressed, then it becomes bigger than identity politics.

It is not a celebration of Indigenous culture when White people adorn native headdresses, but cannot explain the culture or rituals associated with the headdress. The same goes for the dashiki, a Yoruba word meaning shirt stemming from Nigeria.

While the student performers learned the words of the song ‘Baba Yetu’, which were in Swahili, the teaching seemed void of any West African history and utilized the idea that African culture is one to be consumed, used for entertainment, and not learned about as part of the curriculum.

When Unicorn Riot reached out to PLHS administration, school Principal David Lund responded that “the song Baba Yetu was chosen as one of many songs sung at the concert because it is the first piece of music composed for a video game to win a Grammy Award”. Lund’s response demonstrates the lack of consideration for the cultural significance of dashikis in West African history.

For a school that “does not tolerate racial discrimination or bullying in [its] school community”, as described by Principal Lund, there is cause for concern here, especially considering the demographics of the school. Of the more than fifty student performers of this segment only one appears to be of African descent. Furthermore, Prior Lake High School’s ethnic demographic is composed of a 88.7% white population, compared to the typical Minnesota high school which is about 70% white.

After being confronted on social media (largely by people of African descent) about what was considered disrespectful and culturally appropriative, some students persisted in levying insults and behaving abusively. In fact, one student was pictured wearing the dashiki on Wednesday, days after the controversy started. Another student posted the picture of the choir members at school and called the dashiki a “green thing”. Below is the full response of PLHS Principal, David Lund, to Unicorn Riot’s questions.

“What was the reasoning behind doing the Baba Yetu segment in the Celebration Choir? How did the idea come about?” – Unicorn Riot

“The Baba Yetu song was part of our annual Celebrate choir concert. Each year there is a new theme and this year’s theme celebrated Screen Time: Songs from Movies, TV, and Video Games. The song Baba Yetu was chosen as one of many songs sung at the concert because it is the first piece of music composed for a video game to win a Grammy Award.” – David Lund

“Is there any intentional teaching, other lesson plans or curriculum that go into the segments of the Celebration Choir?” – Unicorn Riot

“Yes, choral students and their teacher discuss themes for the concerts along with rationale and meaning behind the music that is chosen.” – David Lund

“After browsing through the videos of the last two years of the Celebration Choir, I didn’t notice use of any other cultural costumes besides the dashikis, are there any that you know of in the past?” – Unicorn Riot

“Previous Celebrate concerts have also had themes such as a salute to Broadway and Icons & Hits of the 60’s & 70’s. Show attire always matches the theme of the concert.” – David Lund

“How did you respond to the controversy (bullying, cyber-bullying, discussions around cultural appropriation, etc.) that occurred this week both online and in real life; i.e. in the classroom, with parents, with specific students?” – Unicorn Riot

“Prior Lake-Savage Area Schools does not tolerate racial discrimination or bullying in our school community, we moved quickly to address the situation. Specifically, high school administration:

– Investigated all offensive Tweets and spoke with the PLHS students involved about the seriousness of the social media messages.

– Worked with the PLHS students who posted offensive Tweets to remove their messages.

– Has been in frequent communication with the individual who was offended by the photo and have a meeting planned to meet in person with this individual.

We took steps immediately to address the offensive posts and continue to monitor social media.

We continue to have an open dialogue with all students affected in this recent social media exchange to reiterate that our school has no tolerance for racism or bullying. We also continue to talk with students about the proper use of social media. Our goal always is to work to ensure we provide a safe and healthy school environment for all students.” – David Lund

“What is your response to the critique that a predominately Caucasian student body wearing dashikis is cultural appropriation?” – Unicorn Riot

“Our intent was never to offend anyone; however, we understand that the impact of this action was offensive to an individual who cited cultural appropriation on Twitter.” – David Lund 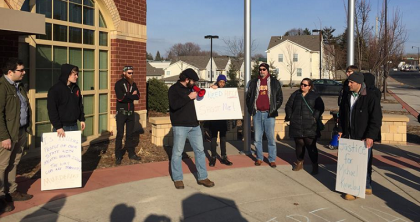 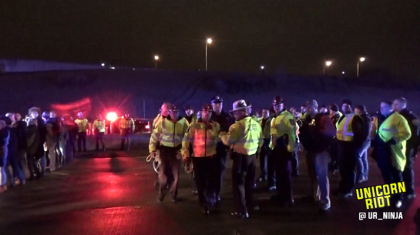