The prosecution claimed that King was identified based on social media posts referring to an underground anarchist action cell called “KC Fight Back Insurrectionist Collective” as well as information from a Kansas City police investigation into “anti-government/anarchy graffiti.”

Approximately a dozen supporters of Eric King attended the hearing, with about as many US marshals present for courtroom security. Phones and computers were not allowed into the courtroom. Our reporter was able to take some notes of what was said during the hearing. We regret not being able to present a full quote of what was said at this time. A transcript will be ordered, but is expected to take several weeks to be produced by the court reporter.

Neither Judge Gary A. Fenner, nor assistant US Attorney Patrick Edwards had much to say at the start of the hearing, other than agreeing that ten years in prison was appropriate since it was both the minimum and maximum sentence for the charge of “use of explosive materials to commit arson of property used in or affecting interstate commerce” (18 U.S.C. § 844[h]) which Eric King had already pled guilty to.

Jude Ortiz, a member of Eric King’s support campaign, was allowed to briefly address the court.

“I am here today to present to this court some context that has been lacking in this case so far. I have read all the public documents that have been produced in this case. I understand the charges that my friend and comrade was facing, and the one that he pleaded guilty to and is about to be sentenced for. I understand the story that the FBI created in their affidavit to obtain the arrest warrant for Eric, the story that the prosecution has carried on in this court. And I understand that the sentence you are about to determine is based on this context, this story – and thus devoid of the context that really matters.

The FBI stated in the affidavit that the Kansas City Police Department pointed them to Eric as a potential suspect because of their separate investigation into “anti-government/anarchy graffiti” around the congressperson’s office that Eric has admitted to attacking with Molotov cocktails. The FBI also stated that they found a hand-written letter in Eric’s apartment that outlined the political motivations for the attack against the congressperson’s office.

This is the context presented by the FBI, with the assumption that these actions that Eric has admitted to are illegal, immoral, wrong. And indeed, according to your laws, they are wrong.

And according to your laws, the daily violence of the police, of corporations, of this so-called criminal “justice” system is legal, moral, right. According to your laws the US government can bomb people around the world, starve people around the world and domestically, deny people clean drinking water in their homes, steal their homes to build pipelines, lock them up for being poor and/or people of color, deny them clean drinking water and adequate food while locked up, and on and on and on.” – Jude Ortiz

Shortly after Ortiz began speaking, Judge Fenner cut him off, accusing him of “grandstanding” as he was attempting to explain to the court the political context leading to King’s decision to attack an empty government building.

King’s public defender Carrie Allen then spoke, making a point to clarify that the attempted firebombing of the empty office of U.S. Congressman Emanuel Cleaver II was not intended as a racist attack against an African-American politician, an untruthful interpretation of events which had previously been presented in local media.

Allen also explained that Eric King traveled to Ferguson in 2014 and took part in protests shortly after the police killing of Michael Brown, and that racist police violence he witnessed in Ferguson solidified his motivation to attack US government property.

Eric King himself was allowed to address the court. He had a lot to say and spoke very quickly, and we regret not being able to present his statement in full until we obtain a court transcript. He began his statement by saying

“This court is a farce. I stand by what I did. I’m happy I did it. I’m sorry that I got caught. I would have loved to attack more government buildings.” – Eric King

King went on to describe the way the justice system in the United States, “more than anywhere else in the world” serves to perpetuate a class-based society on behalf of the ruling elite, and primarily functions to preserve inequality and punish those who would take direct action to change the organization of society.

He compared his own ten-year sentence for destroying a window to the “zero” sentences for the murderers of Freddie Gray and Trayvon Martin. He repeatedly referred to the United States government and the court which was sentencing him as “disgusting“, complicit in “oppressive treatment of the poor and persons of color” and said “all of you are a part of it” – a comment clearly directed towards the judge, prosecutors, and federal marshals.

At one point during his speech to the court, King lifted his shackled hands and raised his middle finger in the direction of Assistant US Attorney Patrick Edwards, the main prosecutor assigned to his case.

After King finished speaking, Assistant US Attorney Patrick Edwards said he would not dignify King’s statement with a response. Judge Fenner called King “obviously a sick, deranged and dangerous person“, to which King replied, “shut up.”

Judge Fenner concluded the hearing by announcing, as expected by all parties, that he was sentencing King to ten years in prison, followed by 3 years of probation.  Judge Fenner also ordered King to pay $298 in restitution.

The Eric King Support Crew has released a detailed statement after today’s sentencing.  They took particular issue with Judge Fenner’s attempt to reduce King’s direct action to a symptom of mental illness:

Prior to imposing the sentence and conditions of release, Judge Fenner felt it necessary to announce to Eric and enter into the court record that Eric is “obviously a sick, deranged and dangerous person” with a “history of mental illness.” While there is always room for learning and growth every time a comrade is imprisoned, we refuse this narrative that Eric’s actions can be summed up as those of a deranged individual. We want to strongly counter this assertion of the state and remind those who hold power that resistance to and direct attacks against systems and structures of oppression is not a sign of mental illness nor delusion. In fact, in many cases these acts of resistance, large or small, are the most sound reaction one could take when faced with the daily horrors and brokenness that are imposed on us all. Eric expressed no regrets today in court and we continue to stand in solidarity with him.

The support crew’s statement also includes a message shared by Eric King over the phone the night before his sentencing hearing:

“This has been a really fucking long and hard journey. CCA sucks. It is a horrible, horrible place. They have done everything imaginable just to drain all of the life and soul out of everyone here. I have been incredibly fortunate to have so many people come into my life and take a stand with me so that I didn’t have to face this shit alone. I have seen how difficult prison can be when you don’t have a support team and don’t have folks in your corner. I wouldn’t wish that on anybody but unfortunately it is the reality for most. The system breeds such an environment.

There have been so many people that interjected themselves in my life with the sole purpose of being there for me and limiting the state’s crushing effect. I don’t know what I would do without those people. From the smallest greeting to the big gestures, everything has meant so much to me. Prison support is a real tangible thing that people can do for each other. We cannot have a functioning radical community without it. So thanks to everyone who reached out to me, if we still talk or not, you have been awesome.

Now that said, I stand by my actions. After seeing what happened in Ferguson, so close down the road, I was disgusted by the lack of mobilization in my city. Three hours away people were fighting for their lives and we weren’t even taking to the streets. We were doing nothing. My act as a very personal display of my anger and rage toward the state as well as an act of solidarity to everyone in Ferguson. We never know our own strength until we are tested and even with my ridiculous sentence I feel at least proud to have been able to stand strong and refuse to cooperate with the state.

I am just really happy that I don’t have to take this alone and have so many amazing people standing next to me. Until all are free.

Thank you for your roles in my life and for your support.” – Eric King

King is currently being held at a private, for-profit, Corrections Corporation of America detention facility in Leavenworth, Kansas. He is expected to be transferred within the next few weeks or months to a Bureau of Prisons facility in Florence, Colorado. 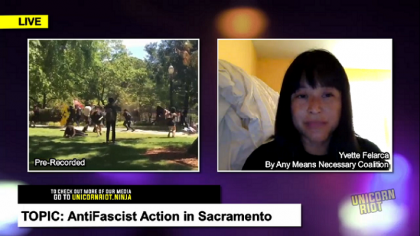 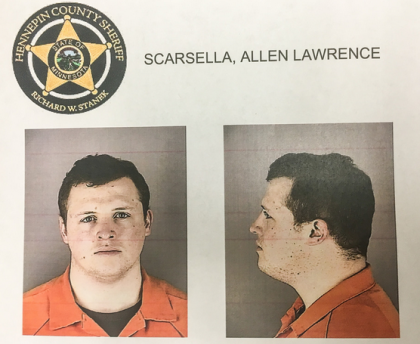