Update: December 2, 2016 – On Thursday, December 1, Judge Daniel Hovland denied the motion for an emergency restraining order on the procedural grounds that Morton County Sheriff Kyle Kirchmeier had not yet been served notice of the lawsuit.  According to a motion filed by the plaintiffs, the Sheriff deliberately avoided two attempts to serve him with papers.

“Although he was present in his office, Sheriff Kirchmeier did not make himself available for personal service. On the morning of December 1, the Morton County States Attorney accepted service on behalf of Sheriff Kirchmeier.“

You can read the notice served to Kirchmeier here.

Morton County, ND – On Monday, November 28, the Water Protector Legal Collective, announced they had filed suit in U.S. District Court over the excessive force used by police and sheriffs against water protectors on Backwater Bridge on Highway 1806 on November 20.

The class action suit, filed on behalf of persons who were injured on the night of November 20 and early morning of November 21, seeks an immediate injunction preventing the Morton County Sheriff’s Department and other law enforcement from using impact munitions such as rubber bullets and lead-filled “beanbags,” water cannons and hoses, explosive teargas grenades and other chemical agents against protesters.

Beginning on the evening of November 20, officers from the Morton County Sheriff’s Department and assisting agencies confronted peaceful Water Protectors at a bridge near the Standing Rock protest camp and within the boundaries of Oceti Sakowin (Seven Council Fires, or Great Sioux Nation) treaty lands. Without giving any warnings or opportunity to disperse, officers fired on them with highly dangerous munitions, chemical agents, a water cannon and hoses in freezing weather. More than 200 Water Protectors were injured.

The Morton County Sheriff’s office not only violates the constitutional rights of peaceful protesters, but their actions highlight the long history of abuse against Indigenous peoples,” said Brandy Toelupe, WPLC lawyer. “From the beginning, governments have used their latest technologies to take land and resources from Native nations and oppress Indigenous peoples. Sheriff Kirchmeier’s actions make it clear that nothing has changed,

The complaint describes the excessive force with which the nine class representatives were met while peacefully protesting. Five are Native, including two members of the Lakota Nation. Vanessa Dundon of the Navajo Nation was hit in the eye with a tear gas canister that was shot by police directly at the crowd of Water Protectors. Jade Kalikolehuaokakalani Wool had two grenades blow up near her head, knocking her down, burning her face and sending shrapnel into it, and causing her to be hospitalized. Crystal Wilson was shot with a water cannon, tear gassed and shot with a munition. David Demo was filming police when, without warning, they shot him with a water cannon and then in the hand with a munition. He was hospitalized with broken bones and was told he would need reconstructive surgery. Gary Dullknife III saw a Water Protector knocked to the ground by a water cannon. As police sprayed her on the ground, he tried to move her away. He was shot in the chest, stomach and leg by impact munitions. Mariah Marie Bruce was peacefully protesting when police sprayed her with water cannons. She was then hit in the genitals with a grenade, and was hospitalized. Frank Finan was taking pictures when he was shot in the abdomen and knocked to the ground by a rubber bullet. Israel Hoagland–Lynn tried to help two people who had been shot with water cannons and rubber bullets and was shot in the back of his head by an impact munition. He lost consciousness, was hospitalized, and needed 17 staples for a head wound. Noah Michael Treanor, while praying, was shot by the water hoses or cannon. Once on the ground, he was shot in the head by an impact munition. Bleeding badly, he was hospitalized.

The civil rights violations that night were deliberate and punitive,” said Rachel Lederman, WPLC lawyer. “The Morton County Sheriff’s Department’s illegal use of force against the Water Protectors has been escalating. It is only a matter of luck that no one has been killed. This must stop.” – National Lawyers Guild, November 28, Water Protector Legal Collective Files Suit for Excessive Force Against Peaceful Protesters

On the night of November 20 on Backwater Bridge, over 300 people were injured after the Morton County Sheriff and supporting agencies spent hours bombarding the crowd near the Oceti Sakowin camp with fire hoses, tear gas, exploding concussion grenades, and various other munitions.

Among those injured was 21-year-old Sophia Wilansky, who is expected to permanently lose use of her arm after being hit with a police explosive. Shortly after the events on the night of November 20, Morton County Sheriff Kyle Kirchmeier and Mandan Police Chief Jason Ziegler defended the use of fire hoses in below freezing temperatures as necessary for “safety” during “an ongoing riot.”

Ziegler confirmed to reporters that fire hoses may be used by North Dakota law enforcement again in the future, saying “it was effective, wasn’t it?” 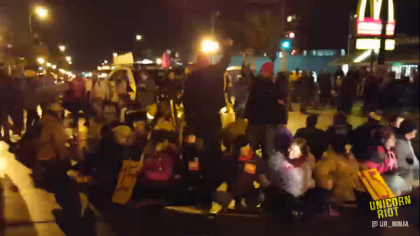 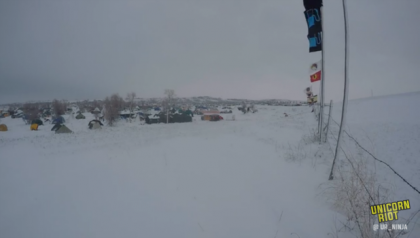