St. Paul, MN – A #NoDAPL national day of action occurred on November 15th, 2016 along with actions across the globe in solidarity with the water protectors struggling to prevent the Dakota Access Pipeline from poisoning of the water supply of millions.

Unicorn Riot was live from St. Paul, Minnesota, where hundreds gathered on a Tuesday at noon.

The action started in downtown St. Paul at Mears Park. Speakers led the rally talking about the importance of the water protectors in North Dakota.

The crowd then marched west on 4th St. towards the St. Paul District U.S. Army Corps of Engineers building. Puppeteers led the march with stampeding buffaloes as youth on megaphones led chants such as “Mni Wiconi – Water Is Life“.

After unsuccessfully gaining entry into the building that houses the U.S. Army Corps St. Paul District office, the crowd stood outside listening to speeches while the police blocked the streets for them.

Nataani Means spoke about what life is like in the camps and being on the frontlines.

“It’s hard out there, it’s hard to live out there. It’s cold. We don’t get any money from this, regardless of what GoFundMe’s say. We don’t get any money. We don’t do this for any kind of fame. We do this for the right to have clean water. For life. This is not a Standing Rock versus the Government issue, this isn’t cowboys and Indians or nothing like that. This is for the basic right of human beings fighting for clean water and to oppose big oil.” – Nataani Means

He also spoke about the action that happened that day in North Dakota, where police blockaded a caravan of water protectors and went from car to car pulling people out and arresting them.

"…police in riot gear, some armed with assault rifles, walked car to car, picking people out for arrest." https://t.co/HcVyOmUXkO #NoDAPL

Speeches happened for around forty five minutes and a round dance took place in the middle of the street.

The crowd split into two groups after the speeches. One section of the crowd marched to Wells Fargo’s branch in downtown St. Paul, led by a horse carriage, while the other section went back to Mears Park before dispersing.

Water protectors in #StPaul brought their msg of #MniWiconi to @WellsFargo, a funder in #DAPL – #NoDAPL – #LIVE https://t.co/zcDC9sOoZx pic.twitter.com/xPs9QvIybI

Bank customers and onlookers filled the atrium and hallways of the building. Speakers described the importance of divesting from banks like Wells Fargo who have stakes in oil companies like Energy Transfer Partners.

When the buffalo puppets entered the building, they symbolically stampeded towards the bank to demand it divest from the Dakota Access Pipeline as cheers erupted from the gathered onlookers. After about a half hour of bringing the message to Wells Fargo, the crowd marched back to Mears Park and then dispersed.

To view the full livestreams of the St. Paul action, view below:

To see a list of the funders of the Dakota Access Pipeline and financial reports, this report from September has detailed information, as we see more articles continue to come out questioning the financial strength, viability, and contracts and deadline of the pipeline.

Below is an image from Food & Water Watch detailing the specific banks’ involvement in the Dakota Access Pipeline.

In further bank-pipeline news, on Monday, November 21st, women in Philadelphia locked themselves down to the front doors of TD Bank to demand they divest their “money from DAPL“.

A total of six people were arrested during this action. To read their press release click here. 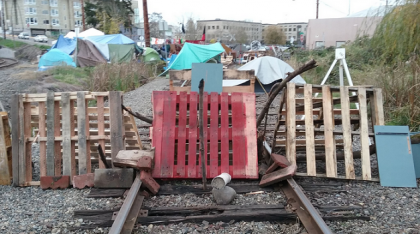 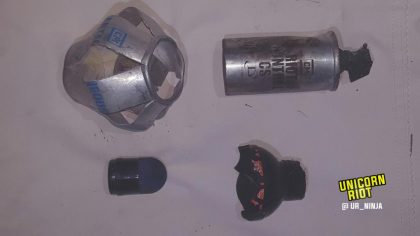