As the struggle against the Dakota Access Pipeline continues after fresh battles in North Dakota, where police injured over 300 unarmed water protectors, land defenders and water protectors are momentously standing firm in the face of corporate fossil fuel extraction across ‘Turtle Island’. [‘Turtle Island’ is an original naming of ‘North America’ by the Native inhabitants of this land.]

Solidarity actions with Standing Rock have taken place across the Turtle Island, and even the globe, consistently throughout the last few months. Soft actions such as banner drops, like the “Stand With Standing Rock, Protect Our Water” banner pictured below in Minneapolis, are continually seen in major cities.

Direct actions stopping the flow of capital have directly impacted business as usual for the corporations and companies fueling the oil and gas industry. An action in Columbus, Ohio entailed a person locked down to a van in a busy intersection, clogging up traffic in the financial district for hours. In other direct actions, people have blockaded train tracks or locked down on equipment and/or pipelines themselves.

A couple weeks ago in Atlanta, a broad coalition of community members blocked the main freight train tracks that route from Florida to Georgia, blocking pipeline construction equipment.

The group that gathered occupied the space on the tracks for over six hours, eventually setting fire to barricades to slow the advance of the police and the ability for the tracks to be cleared. Two people who had been arrested for their involvement with the action face charges of trespassing, criminal damage to property (2nd degree), and arson (2nd degree).

Other direct actions in defense of the earth by land defenders and water protectors have been occurring in spurts across the country. For instance, in Olympia, Washington, a group called Olympia Stand had set up a camp on November 11th, blocking train tracks carrying fracking equipment intended for the Bakken Oil Fields.

Below is a video detailing why the blockade was created.

A statement from the camp released the day of starting the blockade reads:

“We are here to stand in solidarity with Standing Rock as a response to their call for support as the indigenous peoples there are being terrorized by police on a daily basis, as well as to protest centuries of neo-colonialism and environmental racism. Furthermore, our goal is to stop the transportation of more fracking materials to North Dakota. Come join us!” – Olympia Stand statement

Early Friday morning, one week after the blockade encampment was set up, riot police showed up to break up the encampment and to escort the train through the town. Police said they had to use “pepperballs” and “flash bangs” to stop a large masked-up group that was resisting the police pressure.

Below is some video from Olympia from the morning of the 18th of November.

Fires were lit throughout the night and people continued to block the tracks with debris. By the end of the night, twelve people had been arrested.

In Oka, Québec, on November 18th, a group of women who drew inspiration from the water protectors of Standing Rock locked down to the Trans-Northern Pipeline to demand an immediate closure of the pipeline to protect the lands and water that the pipeline runs over.

After demanding the pipeline be shut down, a spokesperson for the group, Jeanne Beauchamp, stated the importance of the demand:

“The Trans-Northern pipeline crosses multiple crucial waterways, including the Ottawa River, and threatens the security of over three million people in greater Montréal.” – Jeanne Beauchamp

In New Jersey, as the struggle against Spectra pipelines in the northeast intensifies, the Water Warrior Collective has been forged. Spectra is in the process of trying to complete a new project called the Algonquin Incremental Market (AIM) Project.

According to Spectra’s website, “the Algonquin Incremental Market (AIM) Project is bringing diverse domestic natural gas supplies into the Northeast to provide homes and businesses with an affordable, environmentally friendly energy source to meet regional demand.” They were aiming to have the project completed by November of this year.

As lawsuits over the project’s approval by the Federal Energy Regulatory Commission await their day in court, New York congressman Eliot Engel asked President Obama “to intervene in a pipeline project under construction in the Hudson Valley and require an independent risk assessment.”

At Split Rock Camp, where water protectors have erected tipis three weeks ago, the community gathered recently after a ceremony and shared songs.

Other under-reported report-backs from other actions across the country can be found at It’s Going Down. 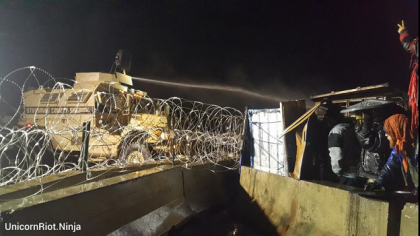 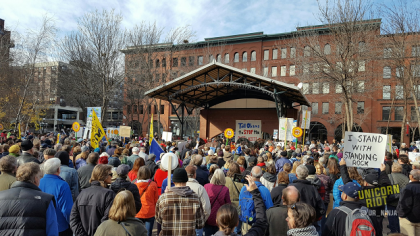