Morton County, ND – Law enforcement attacked private drones with gunfire near the Dakota Access Pipeline camps on Sunday, October 23rd. Shooting ammunition at drones demonstrates continued escalation and provocation by police forces towards #NoDAPL water protectors as well as against media, as the drones were being flown for media purposes.

This comes a day after police were seen macing and throwing to the ground some of the 127 people arrested (including media) during a prayer walk near ancient burial sites and close to DAPL construction.

The Facebook page of Dr0ne2bwild Photography & Video released a short video via Prolific the Rapper showing the gunfire and damage sustained:

Another drone being operated by a video journalist was shot down by law enforcement and the owner was unable to retrieve it.

Morton County Sheriff Kyle Kirchmeier justified the shootings of media drones in a Facebook post claiming that “protesters attacked a helicopter with a drone” and in a press release claimed that the drones caused law enforcement “to fear for their lives.”

Unicorn Riot spoke over the phone on Monday to Morton County Sheriff Public Information Officer Donnell Preskey.  Preskey stated that she did now know if photo or video evidence existed to verify the claim that a drone was flown at a helicopter, but told us that a Mercer County Sheriff was the source of this claim.

Video (below) streamed by Myron Dewey around 1 p.m. CDT on Sunday show the Bearcat and MRAP armored vehicles perched nearby #NoDAPL water protectors, in closer proximity than usually deployed.

The situation is described in a joint statement released by LaDonna Allard of Camp of Sacred Stones, Dallas Goldtooth of Indigenous Environmental Network, Tara Houska of Honor the Earth, and Cody Hall of Red Warrior Camp:

“water protectors took back unceded territory affirmed in the 1851 Treaty of Ft. Laramie as sovereign land under the control of the Oceti Sakowin” Oct. 23 press release

As reports were coming in of police amassing themselves in the region, water protectors erected a roadblock on Hwy 1806 to protect the new winter camp that is directly in the path of the construction route of the pipeline.

Oceti Sakowin (Seven Council Fires) camp coordinator Mekasi Camp-Horinek had this to say about the call to enact eminent domain:

“Today, the Oceti Sakowin has enacted eminent domain on DAPL lands, claiming 1851 treaty rights. This is unceded land. Highway 1806 as of this point is blockaded. We will be occupying this land and staying here until this pipeline is permanently stopped. We need bodies and we need people who are trained in non-violent direct action. We are still staying non-violent and we are still staying peaceful.” – Mekasi Camp-Horinek, Oceti Sakowin camp coordinator

The roadblock on Highway 1806 is featured in the video below along with a brief summary by Unicorn Riot journalist Lorenzo, who’s fresh out of jail after being arrested for documenting a prayer walk yesterday:

Around 4 p.m. CDT on Sunday, police began to arrive at the roadblock.

About an hour later, the roadblock was cleared.

The new winter camp continued to grow fast throughout the day, as seen in tweet below from around 5:30 p.m. CDT.

Explaining the land claim that was invoked as the basis of the new winter camp, Indigenous Environmental Network (IEN) organizer Joye Braun, states:

“We have never ceded this land. If DAPL can go through and claim eminent domain on landowners and Native peoples on their own land, then we as sovereign nations can then declare eminent domain on our own aboriginal homeland. We are here to protect the burial sites here. Highway 1806 has become the no surrender line.” – Joye Braun, IEN 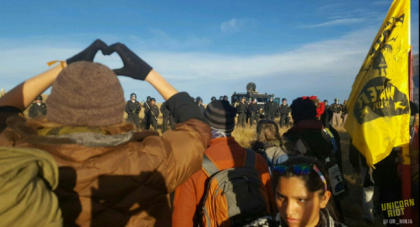 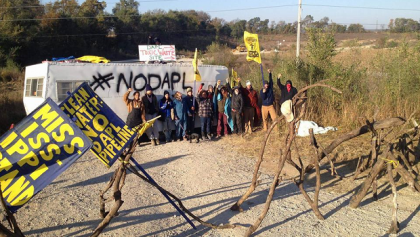