Lee County, IA – On Sunday, October 23, Mississippi Stand, the direct action campaign in Iowa against the Dakota Access pipeline (DAPL), blockaded the access road to a site used to service the drill currently being used to bore under the Mississippi River.

Earlier in the day a funeral possession was held for “all the lives lost in the pursuit of big oil” and dozens of cars drove through Lee County, Iowa.

After the funeral procession, two people locked themselves to a concrete barrel, blocking the access road to a DAPL drill waste storage site.

Access to the work site was blocked throughout the day, and water protectors eventually took over the site entirely. As of Sunday night, the site was shut down and occupied by water protectors who had set up a vehicle blockade and a lockdown on the entry road.

“At noon we pulled into this dump site that they’ve been dumping in for at least 72 hours. We pulled in here and locked on a barrel in the middle of the road. Today, for over 8 hours now, we have taken over the site. The site now belongs to Mississippi Stand as long as we stay here – and the bore machine cannot operate if they cannot dump this sludge off. So we are gonna stay here at our new campsite, and we will remain here as long as it takes to stop the bore machine… We currently have a blockade that’s blocking access to where they’ve been dumping.” – Alex Cohen, Mississippi Stand

Also on Sunday, water protectors in North Dakota responded to the 127 arrests made on Saturday by taking over DAPL-owned land near the Oceti Sakowin camp, establishing a new winter camp there, and temporarily blockading Highway 1806.

As of Monday morning, Mississippi Stand water protectors were still in control of the DAPL drill waste storage site and the drilling under the Mississippi river has not resumed as scheduled. 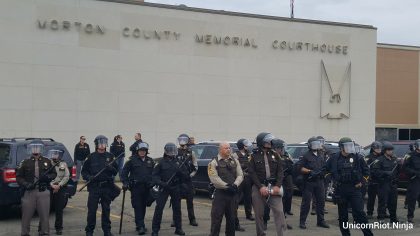