Morton County, ND – Documents acquired through a series of public records requests shine light on ongoing out-of-state law enforcement assistance to the Morton County Sheriff and the state of North Dakota in their militarized police operations to protect construction of the Dakota Access Pipeline.

As we have previously reported, the state of emergency declared by North Dakota Governor Jack Dalrymple in August enabled Governors of other states, such as Wisconsin, to voluntarily activate their state’s emergency management agencies under the Emergency Management Assistance Compact (EMAC) to recruit police and sheriffs in their state to be deployed against #NoDAPL water protectors in North Dakota.

Emails sent in early October show Nebraska state officials discussing sending officers and resources from the Nebraska State Patrol (NSP) to Morton County under EMAC. On the morning of October 12, Brent Curtis, an administrative assistant at the Nebraska Emergency Management Agency (NEMA) wrote in an email to his colleagues,

“Please see the EMAC request from North Dakota below.  They are requesting 40 LEOs to assist with a pipeline protest (“civil unrest”). I just received a call from their POC, Geneva, asking if Nebraska would be able to at least partially fill this request for 40 LEOs.“

Attached to Curtis’ October 12 email is a form entitled “Resource Request #1102-RR-5265” which was originally by Geneva Anderson, an administrator at North Dakota’s Department of Emergency Services. The form requests “40 Sworn Law Enforcement Officers“. Much of the form is redacted, but some of it reads:

“Officers will be assisting in a situation involving civil unrest and criminal activities related to opposition of the Dakota Access Pipeline (DAPL) project, primarily in southern Morton County in North Dakota. Officers will be assigned to perform one of the following duties within the Quick Response Force (QRF).[REDACTED]“

Towards the end of the form, the field “Safety Concerns/Remarks” is filled in with “Civil disobedience situation“.

“Just received a call from Greg Wilz, North Dakota HLS Director. Would lIke to discuss the possibility of an EMAC request for some HP support to assist with protests. He understands there has been some discussions between the two HPs and there may be some interest but wants to discuss before formalizing any request.“

Greg Wilz, Homeland Security Division Director at the North Dakota Department of Emergency Services, appears to be one of the main North Dakota officials responsible for coordinating bringing out-of-state law enforcement to Morton County under EMAC.

More emails sent later that week show conversations between Nebraska Emergency Management administrators and Director Wilz, as well as Sgt. Shannon Henke of the North Dakota Highway Patrol, about requesting an aircraft and a pilot from Nebraska State Patrol. (Sgt. Henke is also the author of an affidavit used as grounds for a felony warrant issued against drone pilot Aaron Turgeon, aka Prolific the Rapper, in retaliation for video journalists using drones to record DAPL private security activities.)

“Nebraska State Patrol’s fixed wing aircraft to assist with the DAPL incident occurring in North Dakota. Cessna fixed-wing 206..and any other equipment they feel is necessary to assist in both day and night flight operations. Aircraft would be on a weekly rotating basis with other aviation resources…“

Further emails between emergency management officials in North Dakota and Nebraska show an agreement for Nebraska to lend a Cessna T206 aircraft as well as a Bell 407 helicopter, in rotating one-week shifts.

Doucments found on Muckrock by Melissa Hill show an EMAC request from North Dakota for Nebraska State Patrol aircraft for a “total of 14 days“.

The “Aviation Support” page on the Nebraska State Patrol website boasts of the surveillance capabilities of their aircraft, and specifically mentions the models which have been deployed in North Dakota.

NSP’s website clearly outlines the surveillance capabilities of their Bell 407 helicopter and Cessna T206 airplane which have been deployed to North Dakota:

“The Bell 407 helicopter is a turbine powered, seven place helicopter with excellent performance and lift capabilities.  The Bell 407 you see below is outfitted with Forward Looking Infrared (FLIR) and a 30,000,000 candle power spotlight.  The helicopter and the pilots operating it are also Night Vision Goggle (NVG) certified.  The State Patrol’s Bell 407 has the capability of transmitting live video from its externally mounted thermal and day light video camera to mobile receivers on the ground.  This exceptional capability provides incident commanders on the ground an aerial view to better manage any critical situation.” – Nebraska State Patrol website “The Cessna Turbo Stationair with the Garmin G1000 avionics panel is a fully IFR capable, technologically advanced aircraft with significant payload capability.  Two of the three State Patrol Stationair aircraft are equipped with provisions to allow FLIR and video down-link capability.  All are equipped with additional wing tip mounted fuel tanks to allow for extended endurance of up to 8 hours.  That additional endurance is ideal during surveillance operations or assignments with extended transit times.” – Nebraska State Patrol website

A video featured on NSP’s page shows shots of the Bell 407 helicopter flying surveillance missions as a metal riff plays, interspersed with footage of militarized SWAT team activity including the use of attack dogs and armored vehicles.

So far, North Dakota has incurred $287,000 in expenses to be repaid to Nebraska, the Omaha World-Herald reported on November 30. On November 21st, Nebraska residents delivered a petition with over 29,000 signatures asking Governor Pete Ricketts to cease providing law enforcement to put down Dakota Access Pipeline protests.  Several of the emails we received from open records request also showed messages of protest being registered against Nebraska assistance to North Dakota.

One EMAC request sent from North Dakota lists a “demobilization date” of January 22, 2017, but a Public Information Officer from the Nebraska State Patrol told us that all Nebraska law enforcement had been withdrawn from North Dakota “by Thanksgiving.”

The Nebraska EMAC emails we received included four different request forms with varying deployment dates. They are as follows:

Read the emails below or download the PDF at this link.


You can also read the Nebraska EMAC documents found by Melissa Hill on the Muckrock request page. 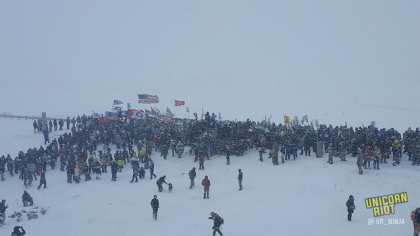 Veterans Apologize for Genocide & March to Backwater Bridge in Blizzard