Standing Rock / Oceti Sakowin, ND – Thousands of water protectors and veterans woke up to snow falling on December 5th, the day after the pipeline easement denial. In the early morning veterans amassed themselves at Prairie Knights Casino in Standing Rock, apologized to the Indigenous peoples of the land for their war crimes, and then later that afternoon led a march in blizzard conditions.

The morning forgiveness ceremony featured a one-of-a-kind apology by veterans of the United States of America to the Native Americans for their war crimes and genocidal actions. Below is a short video from the ceremony posted by Salon.

Wes Clark Jr., veteran and son of a former NATO supreme commander, helped organize the veterans who arrived to Oceti Sakowin during the weekend of December 2nd, in what some estimate as many as one thousand strong.

In his speech to Indigenous tribal elders, Wes Clark Jr. stated historical wrongdoings the United States military and government has done to conquer the land from its original inhabitants, using the word “we“:

“We came. We fought you. We took your land. We signed treaties that we broke. We stole minerals from your sacred hills. We blasted the faces of our presidents onto your sacred mountain. When we took still more land and then we took your children and then we tried to take your language and we tried to eliminate your language that God gave you, and the Creator gave you. We didn’t respect you, we polluted your Earth, we’ve hurt you in so many ways but we’ve come to say that we are sorry. We are at your service and we beg for your forgiveness.” – Wes Clark Jr.

Meanwhile, back at camp, the excitement of the victory of the easement denial seemed to have quelled with the statement from Energy Transfer Partners that they would continue constructing the pipeline despite the ruling. Veterans, who had planned on a Monday afternoon march, quickly made shields to protect themselves in case of police interactions.

Ex-police officer Michael Wood Jr. and Wesley Clark Jr. organized a gofundme page with a call-out to “fellow veterans to assemble as a peaceful, unarmed militia at the Standing Rock Indian Reservation on Dec 4-7“.

By December 7th, they had raised over $1.14 million to go towards “providing food, transportation and supplies for the brave patriots that come and stand with us.” Originally, the veterans were planning on being the frontline of a group that would be “heading straight to the drilling pad” to surround it “arm and arm” to prevent the construction of the Dakota Access Pipeline. That original plan was reportedly diverted by meetings with Indigenous elders as well as law enforcement.

The veterans met with with top-ranking law officials in the beginning of December; and as North Dakota National Guard Major General Al Dohrmann stated, had a “good discussion walked away with a mutual commitment to maintaining peace, showing mutual respect for one another and assuring adequate space between law enforcement and protesters who peacefully exercise their First Amendment rights”.

“Mr. Clark assured us that there was no intent to engage law enforcement or move past the south side of the Backwater Bridge.” – Maj. Gen. Al Dohrmann

Unicorn Riot was live when the march to Backwater Bridge ensued on Monday, December 5th, in blizzard-like conditions.

Moments before the march, dozens of veterans were preparing shields, body armor, gas masks, and winter clothing for the march. Many members of different Indian Nations who had served in the military were present.

The march, in thick snow with whipping winds of over 50 mph, started on Highway 1806 at the edge of Flag Road in Oceti Sakowin, also known as the overflow encampment. A few lines of veterans linked arms in the front with staffs and flags.

Hundreds more veterans and water protectors followed along in the blizzard towards the police line. Some were on horseback and two fire circles were briefly set up in the snow along the embankments of the highway.

Veterans acting as security, led, trailed, and flanked the march. Some in the front stood in a line facing the crowd to prevent anyone from approaching the bridge.

The ceremony on Highway 1806 featured veteran speakers from the front area of the crowd. A prayer was led by Indigenous dancers in the blowing snow. As the prayer was ending, and the masses on the frontline were about twenty five yards from the bridge, police pulled up behind the barricades beyond the blowing snow.

Police, reportedly after making the deal with the veterans and others days earlier, had pulled back from the concrete barricades that lay immediately north of Backwater Bridge. Upon seeing the headlights, many veterans in the middle and on the sides, shouted, “they’re engaging us, get ready“.

Immediately the veterans moved in closer together and began preparing themselves. The security seemed to tighten up as well and yelled at the veterans to hold their “ground” and that they were turning around in a moment. When they made the order to turn around and head “back to camp“, they doubled up on the marshaling and began chanting “move – forward” in a crowd control manner to get the water protectors and veterans back to camp.

Police did not interact with the crowds of people on December 5th. When the prayer ceremony was finished on the bridge, as the blizzard continued, a group of six veterans battled 50 mph winds to bring a large flag of the United States of America from the Backwater Bridge into Navajo Nation’s camp in Oceti Sakowin.

Veterans from the Navajo Nation pose for a picture after taking part in the ceremonial veterans march to Backwater Bridge [12.5.16] #NoDAPL pic.twitter.com/xthlY9sWDH

Below is a short video of the flag being paraded from Hwy 1806 to the Navajo Nation camp. We asked why those veterans were helping and why they were at Oceti Sakowin.

When Unicorn Riot spoke with the veterans, it was clear that they were not convinced the recent Army Corps easement denial will stop construction of the Dakota Access Pipeline and suggested the funders pull their money out.

Throughout the week, the cold weather has become increasingly more extreme in North Dakota.

While rumors swirl about the veteran trip, the veteran organizers have recently come under fire from other vets, one of them calling their actions this week “deplorable“, claiming that they have left swaths of veterans stranded at Fort Yates and other sites. Large numbers of veterans had left the encampment by December 7th.

While many water protectors recently sought refuge from the weather on the 5th and 6th in The Pavilion at Prairie Knights Casino, hundreds of more continue to stay on the frontlines in Cannonball, North Dakota, braving the extreme weather conditions, fully knowledgeable about the polar vortex that is arriving in the next few days. 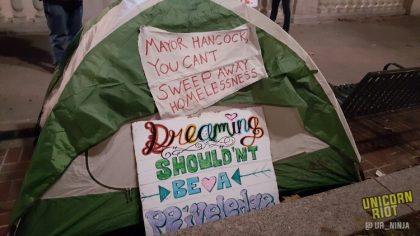 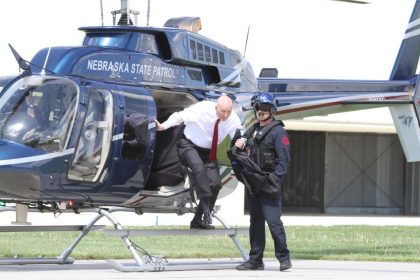