Mandan, ND – Early Tuesday morning, a caravan of dozens of water protectors left the Oceti Sakowin encampment and drove to a Dakota Access Pipeline site on the outskirts of Mandan that served as a “man camp” and equipment yard.

The demonstration had a message of “No More Stolen Sisters” and was called to bring attention to the high rates of missing and murdered indigenous women in communities where the oil and gas industry places camps for workers building pipelines and other projects.

Earlier this year on September 6, Unicorn Riot reported from a direct action where a large group of water protectors stopped work at a Dakota Access Pipeline site.  At that time we spoke with Julie Richards from the Oglala Lakota nation, who spoke about the harm that man camps bring to indigenous communities:

Video: Jules from the Oglala Lakota nation explains why she is locking down to stop Dakota Access Pipeline. #noDAPL pic.twitter.com/cVksUdqg93

As the gathering of water protectors in Mandan got underway, several speakers described how the oil and gas man camps spread human trafficking, sexual exploitation, and hard drugs such as methamphetamine, to surrounding communities.

LIVE:#NoDAPL action in honor of native women that have been brutalized over the years. Highway 10 shutdownhttps://t.co/hp1B8vWVN7 pic.twitter.com/WdKYCAmf48

More people arrived during the speeches and the crowd swelled to several hundred. The crowd moved to block the access road to the DAPL lot.

Unicorn Riot was live throughout the event:

A line of riot police and a Bearcat armored vehicle prevented the water protectors from entering the site, and more SWAT officers soon reinforced the line.

Water protectors parked a vehicle on the access road to the DAPL yard and slashed the tires, leaving it as a barricade.

Police repeatedly announced to the crowd over an LRAD sound cannon that “this is an unlawful protest” to which some of those gathered, responded, “this is an illegal pipeline!”

After some time passed, while the crowd held the space outside the DAPL lot, the water protectors announced over a sound system that they would begin leaving the area to disperse the gathering without confrontation.

During the passing time, the police had been working to flank the crowd, and as the gathering was beginning to leave, they attempted to arrest several individuals from the crowd.

Some were successfully de-arrested by their peers while others were forcibly thrown to the ground. Some arrestees who refused to walk were seen being dragged away by police.

Around the same time that the police moved on the crowd, an “Extreme Alert” was sent to all cell phones in the area – now a standard practice by North Dakota law enforcement almost any time #NoDAPL demonstrations take place.

During this time our reporter witnessed police strike people with batons, fire rubber bullets into the crowd, and release a large amount of pepper spray.

As the crowd began to leave, the police began running at the crowd, pushing and striking people and aiming weapons at them.

Some water protectors were initially able to enter their vehicles and drive away, but law enforcement quickly barricaded a bridge on Highway 10, preventing the rest of the convoy of vehicles from leaving the area.

Video posted to Facebook by Red Warrior Camp shows water protectors trapped in their cars on Highway 10 by police vehicles on both sides. For about forty minutes, dozens of vehicles, many packed with demonstrators who had just been maced, waited on Highway 10 as police in riot gear, some armed with assault rifles, walked car to car, picking people out for arrest. Some individuals were pulled out of their cars, pinned down and taken into custody.

It seemed that specific individuals were targeted for arrest and officers were tasked to retrieve them from vehicles for arrest. Those who were not taken out of vehicles and arrested, dispersed once the police roadblock was removed, either heading to Bismarck or back up Highway 6 to the encampments.

We have confirmed that at least twenty-six people were arrested outside the DAPL man camp on Tuesday morning, and that an additional four people were detained and released without charge.

Most of those arrested face felony charges of tampering, or damaging a public service, stemming from the railway blockage.

Nearby in Bismarck, a group of about 100 people marched from United Tribes Technical College to the U.S. Army Corps of Engineers Omaha district office to demand that the Corps refuse to approve the easement for Dakota Access to drill under the Missouri River.

On Monday, November 14, the Army Corps of Engineers announced that it would delay granting the easement permits in question, stating that “additional discussion & analysis are warranted.”

Dakota Access, LLC responded to this decision by the Army Corps by filing suit in U.S. District Court on Tuesday, requesting a ruling which would state that they may proceed with drilling under the Missouri river with only the permits that have already been granted.

On Tuesday afternoon, Dakota Access construction equipment was still active in the area near Cannonball Ranch.

Water protectors there locked themselves to DAPL construction equipment just after midnight:

Tuesday also saw hundreds of direct actions, demonstrations and vigils take place around the world in solidarity with Standing Rock. In many cities, crowds surrounded or blockaded offices of the U.S. Army Corps of Engineers, or backers of the Dakota Access Pipeline such as Wells Fargo, T.D. Bank, and Bank of America.

GOOD MORNING. It's today. 300+ rallies & actions in all 50 states & the globe #StandWithStandingRock #noDAPL. LOVE FOR THE WATER & EACHOTHER pic.twitter.com/6Tk6uGSB65

Water protectors in #StPaul brought their msg of #MniWiconi to @WellsFargo, a funder in #DAPL – #NoDAPL – #LIVE https://t.co/zcDC9sOoZx pic.twitter.com/xPs9QvIybI

3 #TDBank branches shut down in #Boston by local water Protectors in solidarity of #DayofAction supporting #NoDAPL. They fund the pipeline! pic.twitter.com/fMa6Ewq5Lu

We will continue to provide direct updates about resistance to the Dakota Access Pipeline and will be posting a larger piece on our live coverage of the #NoDAPL St. Paul action that took place later that day. 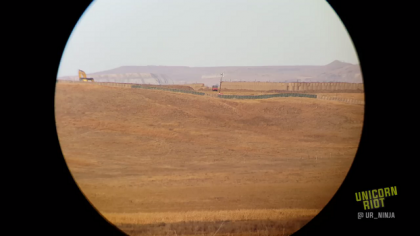 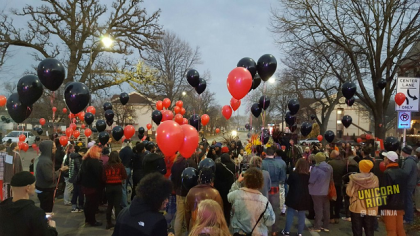