Minneapolis, MN – A large group of community members gathered in North Minneapolis at the site of Jamar Clark’s murder for a candlelight vigil. The vigil lasted two hours and featured speeches, sparklers, fireworks, balloons, and food.

Unicorn Riot was live during the proceedings of the candlelight vigil.

Irma, Jamar Clark’s mother, led the gathering in letting off red and black colored balloons into the sky.

“I want to thank everybody for coming out this evening. It means a lot to his family…You know it doesn’t really seem like it’s been a year. To me, it seems like it was just yesterday…I just hope and pray, you know, that this will change things, far as it’ll make it better, and not just for Black people, but for everyone, regardless of their race or nationality.” – James, Jamar Clark’s step-father

He also went on to express his emotions and hopes:

“It just hurts everyday that I wake up I don’t see him around anymore and I just don’t know. The only thing we can do is to stick together like we’ve been doing and pray.” – James, Jamar Clark’s step-father

Speeches were made by Jamar’s family, including his Mom, step-father, and cousin. Monique, the aunt of another victim of police killing, Marcus Golden, also gave an impassioned speech during the vigil at the site of Jamar’s murder.

As the speeches concluded, sparklers were lit, and a march ensued with a hundred or so folks from the vigil site to the 4th Precinct, which is a few blocks west. As folks neared the precinct, fireworks were shot off in remembrance of Jamar Clark. To watch the fireworks display, see the video below:

When the crowd neared the precinct, the police immediately turned their lights off inside of the building and locked their precinct doors, although nobody from the crowd ventured near the entry way vestibule.

The night ended back at the vigil site after some songs and more speeches.

To watch the vigil in its entirety, see the video below:

A full year has elapsed since the sixty-one second encounter with police officers Dustin Schwarze and Mark Ringennberg that stole Jamar Clark’s life. Massive unrest enveloped the northside of Minneapolis after the murder leading to a historically unprecedented eighteen day occupation of the grounds in front of the Minneapolis Police’s 4th Precinct building.

To watch our livestream coverage of the 18 day occupation of the 4th Precinct, view below:

Seven and a half months ago, the officers who participated murdering Jamar Clark as he was checking on his friend in an ambulance, were officially not charged.

For more of our reports on the protests surrounding the death of Jamar Clark, here are the links: 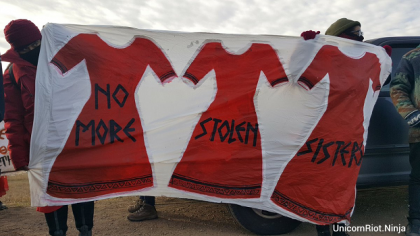