UPDATE- Thursday, September 22 – Olowan Martinez has been freed on bail after being booked in Sheridan, Nebraska, according to a statement posted to Facebook by Red Warrior Camp.

The North Dakota Department of Emergency Services says Olowan Martinez was extradited to Nebraska this morning.

She was held because of a felony warrant for her arrest in NE. She was released into NE law enforcement custody this morning.

Olowan Martinez, an Oglala Lakota mother, grandmother and water protector has been extradited to Sheridan County Nebraska jail today. Her initial arraignment/bond hearing will be tomorrow, September 22nd at 9 a.m. MST. Her charges stem from her participation in the 2013 Women’s Day of Peace rally to raise awareness of the lawlessness in the tiny hamlet of White Clay, Nebraska, an infamous border town that pulls in huge profits by peddling alcohol to neighboring “dry” reservations.
Please lend her your voice…call the Sheridan County Sheriff Terry Robbins at 308 327-2161 or the County Attorney Jamian Simmons at 308-282-0690 and tell them to dismiss these bogus charges!
#blacksnakekilla
#freeolowan

Mandan, ND – On September 20th, 2016, water protectors from Red Warrior Camp and others from the Oceti Sakowin and Sacred Stone camps converged on the Morton County Correctionial Center to hold a noise demonstration.

Unicorn Riot was live for this event (watch below):

The Morton County jail has been used to hold all arrested water protectors from the numerous direct actions which have occurred to stop construction of the Dakota Access Pipeline.

One water protector and Red Warrior Camp elder, Olowan Martinez of the Oglala Lakota nation, from the Pine Ridge reservation, has been held for a week. Long after all others arrested have been released, Olowan continues to be imprisoned at the Morton County jail as the state of North Dakota insists on continuing to hold her for attempted extradition to Nebraska.

Olowan is wanted in Nebraska based on charges related to her alleged involvement in actions against liquor stores in the small settlement of White Clay, Nebraska, which lies just a few miles from Pine Ridge across the South Dakota-Nebraska border.  By most accounts White Clay exists for the sole purpose of selling alcohol to Native people on the Pine Ridge reservation in South Dakota. Alcohol is illegal in Pine Ridge and the reservation has disproportionately high rates of alcoholism and suicide.

Olowan tells her story in this video from the People’s Media Project:

A fundraising campaign has been launched to fund legal efforts to free Olowan Martinez, and raised over $1,000 within 24 hours of being launched.  Various individuals and groups have expressed their concern over Olowan’s continued incarceration and plan to work towards her release.

“Olowan is currently incarcerated at Morton County jail for her defense of the Water at a #NoDAPL action to stop the continued construction of the Dakota Access Pipeline. She is the only one still being held captive, in their custody. The state is pushing for her extradition on charges connected with her resistance at White Clay, Nebraska (to stop alcohol sales from destroying her community) and is attempting to hold her for weeks without proper representation and process….

Olowan is an Oglala Lakota Mother and Grandmother. She is a long time Indigenous Land Defender, Water Protector, a born and raised Warrior. Her roots in resistance run deep and strong, far and wide, from Liberation Days to the Sounds of Resistance, she has worked to bring together the Women’s Peace March, to organize with Mothers Against Meth, to protect Indigenous women from industrial man camps and to stand in the way of resource extractive industry time and time again. Olowan is not only an Indigenous Land Defender and Water Protector, she is also working to actively protect her community from the oppressions tied to drugs and alcohol.

Olowan is a Sundancer, a Pipe Carrier, she is a spiritual woman, a mother to the movement, a teacher, a matriarch and a mentor to the youth. Her war cry has brought so many to these frontlines and many others. We don’t leave our Warriors behind and we will not let Olowan become another missing and murdered Indigenous woman, kidnapped by the state, we will not let her become another statistic, Indigenous women are the largest and fastest growing prison population.” – West Coast Woman Warriors Media Cooperative

A video posted to Facebook by the West Coast Woman Warriors Media Cooperative shows a friend of Olowan reading a letter she composed in jail to her fellow water protectors.  You can read the letter below:

“Anpetu waste’ beautiful resistors, Olowan Miye.. I would like to share with you my Innerstanding of what is happening around me..

I must start by acknowledging my love for my ancestors, my children, and of course for Mni Sose. I also pray my words reach you in good strong health and spirits..

As I sit here in Morton County Jail I can see clearly that us sacred water protectors are the least of their problems..

thru the tears stories and friendship shared with me by the beautiful women of the surrounding communities I know I was meant to be here and for that I have no regrets..

the heartache of a life tormented by abuse of mind body & spirit, the grief of love lost, death and abuse, and the anger of feeling helpless and hopeless is limitless to creed or color..

I have also come to Innerstand that the threat to poison the Mni Sose aka the Missouri River is felt by all..

Altho the sacredness of our first medicine must always be stressed it is always Innerstood by those who choose to listen, and many are listening to Mitakuyapi, my relatives..

I encourage all to keep up the battle to save sacred water thru all tactics being used.. DO NOT GIVE UP!

To the surrounding communities of Morton County, open your eyes, us sacred water protectors are thinking of your grandchildren’s grandchildren whether you want to believe it or not..

We are not getting paid to be here! Everything for everyone, nothing for ourselves.

Death to meth! Death to DAPL! Alcohol is the enemy! 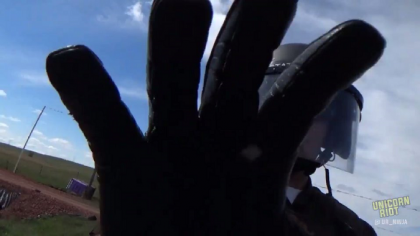 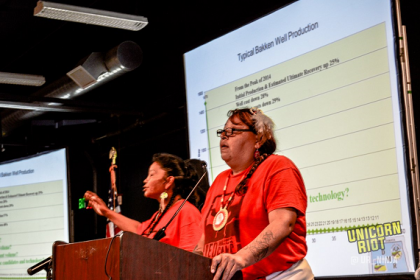