Dubbed the “toxic tour”, a convoy of 111 vehicles stopped at five different DAPL work locations, prompting workers to immediately cease work and leave the area once the protectors arrived.

Water Protectors shutdown five worksites with a their #ToxicTour to say #NoDapl pic.twitter.com/XgcvSKHshA

The Toxic Tour represents a temporary departure from the series of civil disobedience actions which often saw water protectors arrested for entering DAPL construction areas.  As opposed to risking arrest for deliberately halting construction, protectors opted instead to force construction to stop simply by being physically present at construction sites.  Construction workers must abide by workplace safety regulations and cease working if non-workers are present at sites of active construction.

Video of the Toxic Tour:

This fact is illustrated by an email recently obtained by Unicorn Riot in which a union representative for DAPL construction workers contacted the Governor’s office about safety concerns. 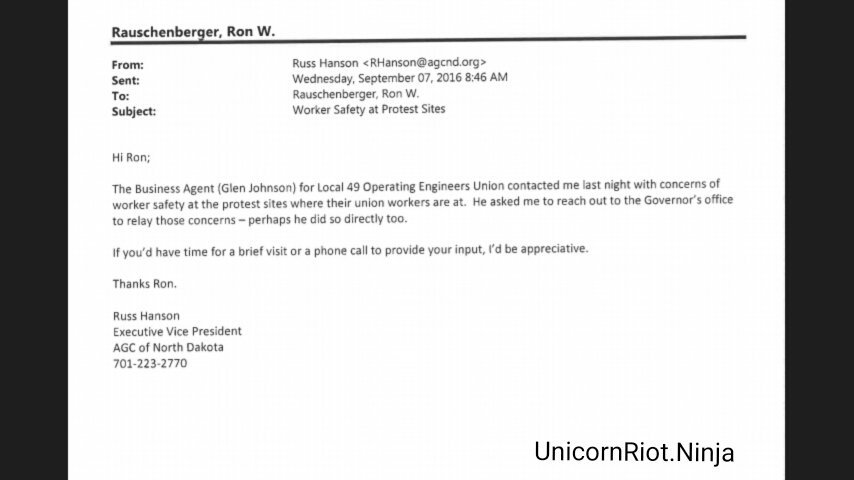 After the caravan of water protectors visited and halted work at the five DAPL sites, they drove to Bismarck, where a debate was taking place between the Democratic, Republican, and Libertarian candidates in the running to become the next Governor of North Dakota.

Water protectors disrupted the debate event inside the venue and also demonstrated outside.

Unicorn Riot was live during the debate, the disruption, and the demonstration outside the venue:

The next morning, on Tuesday, October 4, many people who had been arrested in recent direct actions against the DAPL (including one Unicorn Riot journalist who was arrested while reporting on September 13) appeared in court in Mandan, ND.

All those present in court pleaded not guilty and a tentative December 23 trial date was set for most cases.

After the arraignments, water protector Mason Redwing turned himself in upon learning that a warrant had been issued for his arrest. The charges include the felonies of “reckless endangerment” and “terrorizing”, for allegedly riding a horse near police on September 28.

The state’s attorney requested a $5,000 bond and a travel ban disallowing Redwing from leaving North Dakota. The judge issued a bond of $2,000.

The latest additional charges demonstrate that the Morton County Sheriff as well as law enforcement from around North Dakota is still actively working to identify, arrest, and prosecute people involved in resisting the Dakota Access Pipeline.
The Morton County State’s Attorney’s Office has not yet responded to our request for comment about recent criminal charges filed against water protectors. 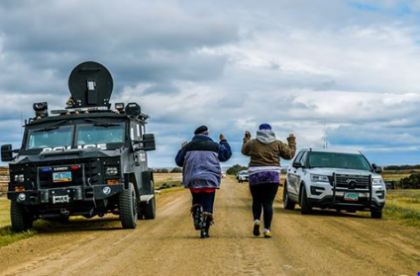