St. Anthony, ND – Over 150 indigenous water protectors convoyed once again to an area west of Highway 6 near St. Anthony, North Dakota where construction work continues on the Dakota Access pipeline.

We spoke with Dallas Goldtooth of the Indigenous Environmental Network about their visits to several DAPL sites:

We had a round dance, people sang songs and offered prayers in that place, then moved to a second location, making their way around to the south to get access to one of the work sites, and they had made it through that way, through a different route.  The whole purpose of the action was to offer prayers and to hold space in hopes to stop construction.  All construction 17 miles west of highway 6 was stopped — all the construction workers had fled the scene and left and stopped work for the day.

By the time the caravan got to Solen, word had already got to the worksites and workers had started packing up and leaving the site…Literally rushing to pack up their gear…there was these massive caravans of 20-30 pickup trucks all leaving these construction sites with DAPL security.

The Morton County Sheriff’s office released a press release later in the day that explained their tactics as necessary and cited North Dakota Century Code 11-15-03 to “preserve the peace and to prevent breaches of the the peace and riots.” The Morton County Sheriff’s also placed the St. Anthony school on lockdown & advised the local residents of the convoy. Previous convoys of water protectors have moved through St. Anthony without incident. The Sheriff’s department stated the reason for the police actions was “unconfirmed” information that the convoy planned to set construction equipment on fire. The Sheriff’s department has also justified previous police actions by using unconfirmed reports of “pipebombs & firearms.”

Goldtooth reacted to the police presence:

It’s just an inappropriate use of public funds and resources for what has obviously been a peaceful gathering of resistance.  I think that it’s an escalation by the police that has not only been inappropriate but also very dangerous…it sends a message to non-native landowners in the area …they’re painting a picture that we’re violent protesters that demand to have the National Guard members on site, that demand to have officers coming from Fargo and Grand Forks hundreds of miles away, to send in automatic rifles…I think it sends the wrong message.  They themselves are creating a dangerous scenario, for all people.  It’s absurd.  The amount of money that they’re spending for this, I just can’t understand it.

Goldtooth went on to describe how today’s caravan action by water protectors connects to the wider struggle against DAPL currently unfolding in the courts as well as in other states such as Iowa:

As we’ve seen in the fights against Keystone XL and Northern Gateway, and other pipelines across Turtle Island, it’s absolutely essential that you have a multi-pronged strategy and approach – that you have a legal strategy, and also have a physical on-the-ground strategy, working in conjunction with each other.  And what you see today, with this demonstration, is that no matter what is happening in the courts, we’re there on the ground holding Dakota Access accountable.  We’re there on the ground to stop this pipeline no matter what comes.  We’re gonna be there until this pipeline can be stopped.  We send prayers and are constantly hopeful that we get some traction in the courts, but we’re not holding out for that.  We’re doing our end of the fight to make sure that [DAPL] is delayed as much as possible, in hopes that the court can make the right decision, and if they don’t, we’re still going to be there.

His statement comes after a hearing in the U.S Court of Appeals for the D.C. Circuit for the Standing Rock Sioux Tribe’s injunction to halt Dakota Access Pipeline construction. A ruling wasn’t issued, which keeps the temporary halt inside the 20 mile buffer zone in place. The Tribe gave a statement read by Tribal Chair Dave Archambault II ending with:

The approval of this Pipeline by the U.S. Army Corps of Engineers is a violation of our treaty rights and we will not stop fighting until our lands, people, water and sacred places are permanently protected.

More news arrived from water protectors who had been previously arrested and appeared in court yesterday morning.  Happi American Horse, who was arrested during a lockdown which halted DAPL construction on August 31, had his initial case dropped and new charges filed, including reckless felony endangerment.

Police have ordered protesters 100 yd away while they try to free machine. #LIVE https://t.co/3hddgOuN2p #noDAPL pic.twitter.com/qblfXF0uyM

American Horse, whose trial date was set for December 23 and is currently free on bail,  responded to the escalation of legal tactics being used against water protectors:

We as protectors are not intimidated when it comes to defending Mother Earth, either on the front lines or in the courtroom. –Happi American Horse via Sacred Stone Camp

Actions by water protectors came on a cold day with wind chills dipping below freezing. In the face of escalating police presence and the impending onslaught of North Dakota winter, actions against the Dakota Access Pipeline would seem to have no end in sight.

…we’re ready for winter, ready to stand and hold the line. – Dallas Goldtooth 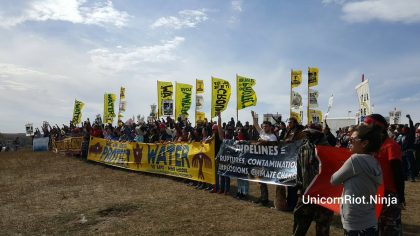