Tucson, AZ – On February 16th, Unicorn Riot arrived at a demo against the recent waves of ICE raids across the country. When we arrived, the protest had taken the streets across from the federal building in downtown Tucson.

The police blocked the march’s progression with a vehicle and immediately began to make arrests. Police used force to remove protesters who stood in front of their vehicle while demanding the officers release a detainee. After creating space between the vehicle and the protesters, police began use chemical agents against the crowd, and four people were arrested.

Unicorn Riot spoke to a LUPE (Lucha Unida de Padres y Estudiantes) organizer, Edward Cott Tolentino, who told us that the protest was organized against the Trump regime’s ICE raids and detainments that have arrested 680 people since the inauguration on January 20th. Tolentino explained that the arrests weren’t just those targeted, but also “collateral arrests“, people who were coming out of their workplaces, or churches. They also demand that the City of Tucson become a ‘sanctuary city’, a policy stance which would not assist deportation efforts from other levels of government.

“Immigrants rights movements across the country, and here in the border regions are facing a new enemy and harder pressure and we are going to continue fighting like we have been doing.“

When asked about the police response, he explained that Tucson has a militarized police force that sees people’s movements as the enemy and also that the people have been clashing more with the police since 2010’s passing of SB1070, a controversial immigration law. He felt that the police were always ready to use force if necessary. Unicorn Riot reached out to the Tucson Police Department for a statement but has not received a response.

According to local organizers of the four arrests, two were uniformed Brown Berets, and one is a well-known Black Lives Matter organizer. The Brown Berets have been charged with aggravated assault, a felony, along with a third person arrested. The Black Lives Matter organizer is charged with obstructing a roadway & failure to produce identification, both misdemeanors. The gathered crowd disputed the arrests and some felt they were targeted.

Unicorn Riot just arrived in the Border Lands to help document the ongoing Border Crisis. We’ll be spending a couple of weeks along the United States Mexico Border. This was the first thing we ran into.

Thank you for your continued support. 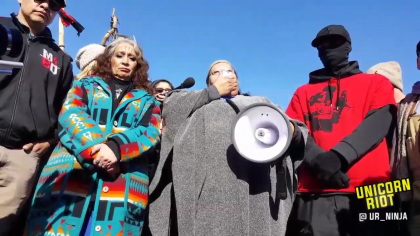