Oceti Sakowin, ND – On the morning of Thursday, February 16th, Ladonna Brave Bull Allard, Standing Rock tribal member, landowner and founder of Sacred Stone Camp, was served an eviction notice for Sacred Stone Camp by agents of the Bureau of Indian Affairs. She reportedly has ten days to show that she is not trespassing on her family’s historical land.

This morning LaDonna Allard was issued an eviction notice for Sacred Stone Camp. Reported that BIA has given 10 days notice. #NoDAPL pic.twitter.com/1z9BoKkfaG

On Wednesday, February 15th, the militarized barricade erected by the Morton County Sheriff on Backwater Bridge on Highway 1806 was moved several yards closer to the main camp near the Dakota Access Pipeline route.  The perimeter of armed North Dakota personnel with military vehicles, surveillance teams and floodlights are now within a stone’s throw of the outskirts of the Oceti Sakowin encampment.

The Army Corps of Engineers had recently issued a February 22nd evacuation deadline for everyone camped at Oceti Sakowin, after which they said they would forcefully evict anyone remaining. North Dakota Governor Doug Burgham issued an evacuation order calling on all present at the Oceti Sakowin camp to leave immediately, stating that the date of February 22 set by the Corps was not soon enough.

Cleanup has been ongoing for weeks now at Oceti Sakowin and construction crews continue to work all day to clear debris from the floodplain. The camp has shrunk in population considerably in the last few months, with an estimated 500-700 people remaining.

“It’s clear that we are reaching further and further to a state of impasse. It’s logistically impossible to get every structure out of the floodplain. We see these as measures of encroachment, some could call it acts of international aggression…The land that we are on, that the [Army Corps] claims now, from an illegal annexation and an illegal taking, that land belongs to the Great Sioux Nation, which is represented by six different modern native nations. – only one of which is being considered the leader, and that is the Standing Rock nation…It’s clear that the Standing Rock nation, the Army Corps of Engineers, the State of North Dakota and representatives of North Dakota’s governor, do not take into consideration every autonomous that is exercising and standing up for their treaty rights and their inherent rights to assert themselves in treaty territory.”  – Chase Iron Eyes

The meeting on Highway 1806 was also attended by representatives from North Dakota Governor Doug Burgum’s office, North Dakota’s Department of Emergency Services, the Army Corps of Engineers, and the Standing Rock Sioux Tribe, who all arrived and left together.

When asked if they would permit people to continue to camp on Army Corps land so long as it was higher land that was not a flooding risk, both Army Corps officials and a representative of Governor Burgum insisted that all Corps lands would be closed to water protectors and they would still be forcibly removed and/or arrested.

After the larger camp meeting ended, community leaders from Oceti Sakowin continued to speak with representatives from the Army Corps of Engineers, who eventually indicated a willingness to be “flexible” regarding the February 22nd date so long as water protectors did in fact intend to vacate the premises. Unicorn Riot was live during some of these conversation:

It is unclear if this indication by the Army Corps changes the current set eviction date of February 22nd. Unicorn Riot will keep providing on the ground updates from the #NoDAPL encampments in North Dakota as developments continue. 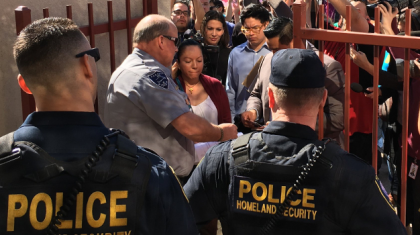