Huntingdon, PA – After receiving all necessary permits from state regulatory agencies in February, Sunoco Logistics has been pushing ahead with construction of the Mariner 2 East Pipeline. Sunoco Logistics Partners and Energy Transfer Partners, announced the completion of their corporate merger on April 28.

Mariner 2 follows the route of Mariner 1, a repurposed oil pipeline which carries natural gas liquids (NGLs) to the east coast for export. Mariner 2 would follow roughly the same route, stretching over three hundred miles across the state of Pennsylvania from frack fields in Scio, Ohio to bring propane, ethane and other fracking byproducts to Marcus Hook, a refinery and export hub just south of Philadelphia. While Sunoco/Energy Transfer Partners promotes the pipeline with rhetoric about American energy independence, the natural gas liquids transported by Mariner East 2 are primarily for export to the European plastics industry.

The highly explosive nature of the natural gas liquids carried by the pipeline means that the various homes, businesses, and schools could be incinerated in a natural gas fireball in the event a leak occurs and then is ignited by a motor, cell phone, or many other everyday appliances.

Despite being an interstate pipeline, Mariner East 2 is not regulated by any federal agency. It is primarily regulated by Pennsylvania’s Department of Environmental Protection, an industry-friendly agency known for issuing permits despite not having enough staff or funding to properly oversee permitted projects.

The primary obstacle to the completion of the Mariner East 2 pipeline has been the Gerhart family in rural Huntingdon, whose property has been condemned for eminent domain. In March 2016, landowner Ellen Gerhart and several supporters of the Gerhart family were arrested by Pennsylvania State Police after people climbed trees to prevent them from being cut, in violation of a court order telling the Gerharts to not interfere with any pipeline work being done under her property. (See video from that day here.)

All charges against those arrested on the Gerhart’s land in 2016 were eventually dismissed after 8 months of court proceedings. The 80-year-old forest, now mostly clearcut by pipeline workers, was a treasured part of the Gerhart family’s home, as they had placed the land into forest stewardship with the hopes of preserving it for generations to come.

The combination of tree-sits, defensive measures, and supporters gathered on the Gerhart’s land has come to be known as ‘Camp White Pine’ – an homage to the numerous white pine trees which still populate the area.

A rare “Writ of Possession” was granted to Sunoco Logistics by a local judge, allowing them greater authority to enforce their eminent domain rights on the Gerhart’s property- including using law enforcement to remove landowners from their own property. Ignoring orders from County Judge George Zanic made on behalf of the pipeline company, the Gerharts and their supporters have created what is said to be the most complex tree-sit operation on the east coast.

While construction crews have not yet encroached this year on the fortified tree-sits where Camp White Pine still stands, despite having been granted eminent domain for the area, construction on Mariner East 2 continues in surrounding areas.

On Monday May 22, pipeline work crews arrived without notice on Ralph Blume’s farm near Newville, PA and began cutting trees. The Cumberland County Sheriff was there to intercept Mr. Blume when he came to confront workers who he said promised him they would give advance notice before working on his property, which they did not. The sheriff told Mr. Blume he would not arrest him, which Resist Sunoco PA speculated was “because Sunoco didn’t want the bad publicity that would come with arresting a 77 year-old man.”

Energy Transfer Partners has already had accidents and spills while constructing the Mariner East 2 Pipeline in Pennsylvania. On May 3, a large slurry of drilling fluid spilled into Chester Creek as drilling for Mariner East 2 was being done in Delaware County, PA. Work crews placed sandbags around the slurry, which was an ineffective means of containing the spill as the water simply rose above the sandbags and spread the slurry downstream. The drilling fluid contains bentonite clay, which is known to be deadly to aquatic wildlife. The original Mariner East 1 pipeline also leaked 20 barrels of ethane and and propane on in Berks County on April 1.

On June 29, Huntingdon County George Zanic issued a new injunction requested by Sunoco/Energy Transfer Partners authorizing the arrest of anyone on the Gerhart property who impedes pipeline construction. Neither Judge Zanic, or any employee of his court, informed the Gerharts of the injunction made against them on behalf of the company, they only heard about it after being questioned by news reporters.

The new injunction means pipeline workers, accompanied by police who may target and arrest landowners on their own property, could arrive on the Gerhart’s land any day now. When we asked Elise Gerhart what she expected, she told us,

“I expect them to come with brute force. That’s how they’ve done it in the past, that’s what we saw at Standing Rock… that’s the way that they do it. If they can’t trick you, they bully you. If they can’t bully you, then they attack you. So, that is what I expect…they want to build this pipeline and we’ve seen, when Energy Transfer Partners wants to build a pipeline, they’re willing to physically hurt people to get them out of the way. And we’ve seen how the police are complicit with that. At this point I am expecting to go to jail, potentially for an extended period of time, I’ve been trying to prepare for that. All I can say is that sometimes you just have to do what’s right. You have to try and protect yourself from harm, and we’re just trying to do everything we can to do that.” – Elise Gerhart

An investigation by The Intercept into the private security firm Tigerswan, now known for their illegal operations in North Dakota to protect the Dakota Access Pipeline, shows the mercenary contractor is also monitoring opposition to Mariner East 2. Tigerswan advisory board member James Marks was also found to have written an editorial for PennLive.com attacking opponents of Mariner East 2, without disclosing his personal connections to a firm employed to harass pipeline opponents.

A lawsuit by Clean Air Council, set for trial this December in Pennsylvania’s Supreme Court, could possibly stop the pipeline based on issues with its permitting and use of eminent domain. In the meantime, construction continues, and local authorities (the Huntingdon County Sheriff and Pennsylvania State Police) have historically been quick to respond to the pipeline company’s requests to repress their opposition. The Huntingdon County Sheriff has not yet responded to our request for comment.

We spoke at length earlier this year with Elise Gerhart about her family’s fight against Mariner East 2 on their property, the direct action tree sits at Camp White Pine, and how the pipeline fight in Huntingdon connects to broader struggles across the state and the country. Read or listen to the interview here. 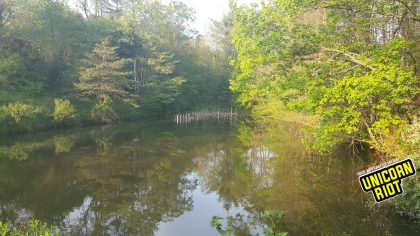 “We’ve Got No Choice”: Interview with Elise Gerhart of Camp White Pine 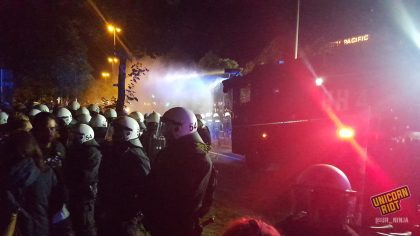