Hamburg, Germany – Unicorn Riot journalists spent their first day in the streets of Hamburg trying to get oriented to the city and the #G20 Summit, a top-level international forum for the politicians and central bank governors from the 20 major world economies. July 4th, our first day, included a visit to a media center and later we would witness police use fists, batons, pepper spray and water cannons on people socializing in various parks.

As evening set in, Unicorn Riot attended a press conference held at the independent media center located at the St Pauli football club stadium. The center has over 300 stations for media makers to be able to update their platforms. The media center’s goal is to provide a multitude of perspectives to be able to counter the police narrative of the protests.

At the press conference the speakers said they wanted the opportunity to debate the topics on the table. They also stated that protest without camps is impossible and if police wouldn’t let them camp ten thousand people will be taking spaces.

After the press conference, Unicorn Riot went to a small park where activists had set up tents and a food kitchen. The goal was to create an encampment. The police had earlier taken tents and sleeping gear from a camp that a local judge ruled was a legal camp.

The new camp at Wohlers Park would eventually be raided by hundreds of riot police who swooped in and forced everyone back using batons, punches, and pepper spray. After the police pushed everyone out, they surrounded the tents and sleeping gear and tore them down and took them out of the camp. Protesters chanted in defiance and eventually marched into the streets.

We moved to another camp that wasn’t intended to be set up permanently. The space was being used as an info point and gathering space. We arrived as a band took an ad hoc stage and played to the thousands gathered. Thousands of riot police appeared with armored vehicles with plows, and trucks with water cannons.

The people gathered were listening to the music, chatting & drinking in the park. When police showed up, people moved into the street. Police then demanded people to clear the streets, despite their vehicles eliminating all traffic in the area. When people did not move police began moving forward pushing people off the streets. They used water cannons, pepper spray, fists, and batons.

A few bottles eventually shattered on the streets near police. After clearing the streets, police used a water cannon on the people gathered in the park. They also sent squads into the crowd and pulled someone out and arrested them.

Another one of our journalists witnessed an arrest. Unicorn Riot only saw two arrests but others may have occurred in different parts of the gathering.

We left the St. Pauli area of Hamburg, Germany and saw dozens of police vehicles stationed in the area and police sending squads into the crowd. Many people we spoke to said this was only the beginning and that today wasn’t even a protest.

Unicorn Riot will continue to document the protests around the #G20 Summit in Hamburg, Germany. 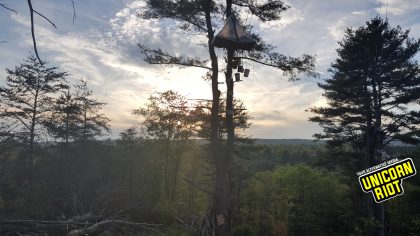 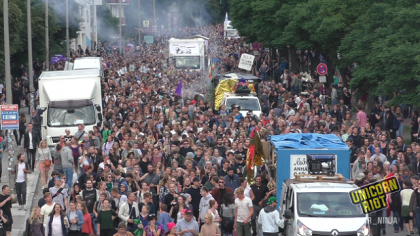