UPDATE (8/24/17 at 11:30 AM MDT): On Thursday morning during the press conference outside the Lindsey-Flanigan Courthouse in Denver, Terese Howard spoke to a group of supporters and fellow activists about the city’s back-tracking:

Because of a lot of the public pressure that has ensued mostly yesterday with this, the city actually is back-tracking . . . because yesterday the city sent an e-mail to my lawyers David Lane and Andrew McNulty saying, ‘Well, actually, never mind, we never said 30 days, we said 5 days, and we don’t really need 5 days if she’ll do the probation and the community service and this and that, so it’s looking very likely like they won’t end up trying to throw me in jail today.”

Howard was correct because during the hearing, the city said as long as she admitted to violating her probation, the violation would be revoked and her probation of one year that she was sentenced to on April 5, 2017 for being found guilty of resting outside will be reinstated.

Howard will also have to complete an additional 30 hours of community service, which totals her hours to 90 that she must complete during her year probation, but she was not sentenced to jail time.

After admitting she violated her probation, Terese had some clarifying words to share to the court:

The violation of probation is clear, that however says nothing about guilt or whether these laws should exist in the first place. That’s all technicalities; no things that are based on injustices on my part or whether crimes were committed. What I have a problem with is that it should not be illegal to wear a blanket.”

Terese Howard restates what she told the judge inside the courtroom after her probation was reinstated. Read more: https://t.co/SVlFfrQQD8 pic.twitter.com/GKGigtgjgR

Denver, CO – On Thursday, August 24, 2017, Terese Howard, human rights activist and community organizer, faces a sentencing of up to 30 days in jail for violating her probation; but it isn’t that cut and dry.

Members of Denver Homeless Out Loud (DHOL) believe Denver is trying to “intimidate” Howard and the organization.

After years of meetings and conversations between DHOL, the organization Howard works most closely with, and the city of Denver and land owners, such as the Denver Housing Authority (DHA), to discuss the creation of an “innovative and attainable solution to the housing crisis . . . no one in the city would talk to us, no one in the housing authority would talk to us, and instead they were super focused on criminalizing homelessness and increasing the enforcement of their camping ban,” Karen Seed, fellow community organizer with Howard, told Unicorn Riot.

Because of the heavy push-back from the city to accommodate any of the needs voiced by the unhoused residents of Denver and their supporters, DHOL, along with the Permaculture Action Network and other organizations, decided to build a tiny home village they called “Resurrection Village” (inspired by Rev. Martin Luther King, Jr.’s “Resurrection City“) on Sustainability Park, which was owned by DHA, on October 24, 2015.

By the end of the night, we were surrounded by police officers. There was probably about 70 cops in about 40 or 50 cars. There was at least two SWAT units that I saw and there was a helicopter overhead.”

Unicorn Riot was present during this tiny home build. Below is one of our live stream videos from the action day.

In the press release published by DHOL on Sunday after the action, the group explains why they chose to build the tiny homes on Sustainability Park:

The Denver Housing Authority, which owns the property, has torn down hundreds of low income housing units, and after allowing the Urban Farming Cooperative to use the land for a few years, has agreed this year to sell the land to a private developer, who will build multifamily housing that will support gentrification in Curtis Park, but be far beyond the reach of those for whom the Denver Housing Authority is supposed to exist.”

Ten of the people who participated in the action day were arrested because they chose to remain inside one of the tiny homes they had just built. Howard was one of those 10 people.

Two years later it becomes clear that what we did was monumental because it moved the conversation forward at a time when it had stagnated and it forced the city officials to be accountable to their actions in the public trust.” – Karen Seed

A year later, on November 28, 2016, Howard was ticketed for violating the Unauthorized Camping Ordinance, also know as the camping ban, which effectively makes surviving in public space illegal for people without housing. Jerry Burton and Randy Russell were also ticketed, and the three of them chose to fight the tickets in court with legal representation by Jason Flores-Williams.

Flores-Williams is also one of the attorneys representing the class in the class-action lawsuit against Denver for criminalizing unhoused people through means like the camping ban.

This trial was the first where a camping ban ticket was fought in Denver.

On Wednesday, April 5, 2017, after a day and a half of testimony, the jury found the three co-defendants guilty.

At the time, there was no ruling by the judge of how Howard’s guilty sentence could affect her probation, but now the city of Denver wants to put her in jail.

David Lane, a local civil rights attorney and member of the American Civil Liberties Union, will be representing Howard on Thursday.

Unicorn Riot will be live streaming during the press conference prior to the hearing on Thursday. The stream can be watched below: 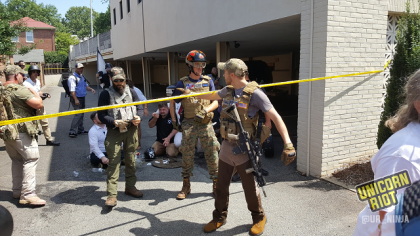