West Whiteland Township, PA – Residents along the construction route of Sunoco/Energy Transfer Partners’ Mariner East 2 pipeline are reporting contamination in their water after pipeline drilling accidents led to a chemical slurry compromising a well, which then tainted another well and several aquifers.

Over the last few weeks, neighborhoods in Chester County west of Philadelphia began experiencing stomach aches, and noticed their water was sometimes brown in color, contained sediment and bacteria, and smelled of chlorine.

Continued drilling operations threaten to entirely destroy the safety of area wells, which would force those relying on well water to hook up to the public water system. While Sunoco has offered various forms of compensation for issues with private wells, those on the local public water system have also been reporting stomachaches after drinking water that smelled like chlorine.

Correspondence between Sunoco Logistics and the Pennsylvania Department of Environmental Protection (DEP) shows that both Sunoco and DEP officials knew that drilling in certain geological formations in the Exton area could damage the local water table.

“Karst area near Exton and the East Whiteland compressor branch present additional risks of IRs [inadvertent returns] during HDD…There are carbonate rocks, karst surface depressions; and identification of other public water supplies (groundwater or surface water) within one mile… Groundwater impacts from an inadvertent return cannot be directly visually observed from the surface. Any loss of circulation is the only indicator of drilling fluid migrating out of the borehole into the groundwater.“

Sunoco representatives downplayed the risks from the drilling slurry (a mixture of chemicals and mud) in conversations with affected residents, comparing the bentonite clay to cat litter or the foundation used in makeup. Earlier this year, Energy Transfer Partners spilled two million gallons of drilling liquids into Ohio wetlands while constructing the Rover Pipeline, leading to a $430,000 fine and the temporary suspension of their horizontal directional drilling operations.

In West Whiteland, horizontal direction drill (HDD) operations were paused for a few days but resumed again on Saturday, July 8, despite objections by local lawmakers. Drilling is taking place on the grounds of the Whiteland West Apartments, a development with 377 housing units.

[email protected] (Energy Transfer Partners) operating a horizontal directional drill for #MarinerEast2 in the middle of a housing complex pic.twitter.com/44ieQIc4FH

An open air waste pit for drilling waste is set up adjacent to the drill at the Whiteland West Apartments, a stone’s throw from some resident’s balconies.

On July 3, a Uwchlan Township resident posted a picture showing how a new pipeline work site had taken up much of the playground area at her child’s daycare.

Photo challenge day #3 I don't use Instagram but I downloaded it just to post this picture for our officials to see what is happening. I don't have an easement on my house BUT this is the daycare my child goes to. Their beautiful green outdoor play space that once had tall trees to shade them is now about 3 feet away from a fence/wall where the pipeline is being built right on the other side!!! The trees are taken down and the dust and debris that are flying around can't be good for them. Then when it's all done if there should be a leak, I can't even imagine that outcome! This is what people are living with. How can those in power allow corporations to do this? #pipeline #pipelinesafety #uwchlantwppa #uwchlanpa #chestercounty #chesco #pennsylvania #makeadifference #photooftheday #marinereast2 #change #trending #natgas #photoofthedaychallenge #frommypointofview #lionville #community #communityaction #6abcaction #cbsphilly Governor Tom Wolf, Senator Pat Toomey, U.S. Senator Bob Casey, Congressman Ryan Costello, PA State Rep. Becky Corbin, Commissioner Kathi Cozzone, John C. Rafferty, Jr. 6abc Action News, NBC10 Philadelphia, The Daily Local News, Philadelphia Inquirer, CBS Philly

Starting at frack fields in Scio, eastern Ohio, Mariner East 2 will carry highly explosive natural gas liquids such as propane, butane, and ethane across Pennsylvania to export terminals at Marcus Hook near Philadelphia.

These gases could be easily ignited by everyday appliances in the event of a leak. Many local schools, homes, and an assisted living facility are all well within the blast radius should leaked gases explode.

Glenwood Elementary in Media, PA has been conducting emergency evacuation drills with students to prepare for a potential pipeline leak explosion.

Quest Consultants, an independent firm hired by Middletown Township to evaluate the risks from a potential pipeline explosion, ran several detailed statistical simulations of potential leak scenarios. An analysis of data from previous spills estimates “that a leak will occur along the shared route once every 2.5 months.”

On April 1, the Mariner East 1 pipeline, which Mariner East 2 will run parallel to, leaked 20 barrels of propane, ethane and butane in Berks County, PA.  An explosion from a leaking natural gas pipeline in Pennsylvania last year set fire to forty acres of land, and left a 26-year old father covered in severe burns. Sunoco has one of the worst pipeline safety records of any company in the business.

The fracking and pipeline industries in Pennsylvania, assisted by Governor Tom Wolfe’s task force to accelerate pipeline construction, have been aggressively expanding new infrastructure throughout Chester County and many other areas of Pennsylvania.

Affected residents living in and along the path of Mariner East 2 across the state have been raising objections and resisting in various ways. Sunoco claims the natural gas liquids pipeline will be in operation this year; hundreds of miles of the route are still incomplete as of this writing.

Military intelligence contractor Tigerswan, which worked for Energy Transfer Partners behind the scenes to disrupt and discredit the movement against the Dakota Access Pipeline, is monitoring opposition to Mariner East 2 in Pennsylvania. A consulting firm called Bravo Group boasts on its website about its contract for Sunoco Logistics to “neutralize opposition” to Mariner East 2 – a vague mission which presumably includes keeping tabs on everyone from blockaders at Camp White Pine to the various neighborhood-based Safety Coalitions formed in townships along the pipeline route. 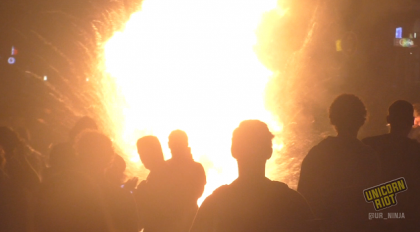 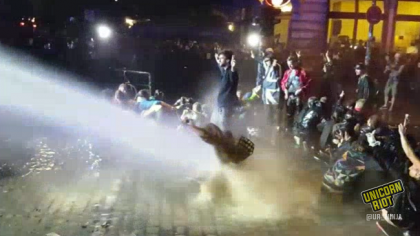