Boulder, CO – On the evening of Wednesday, January 25, a conservative student group at the University of Colorado at Boulder hosted speaker Milo Yiannopoulos, an editor for Breitbart.com, a far-right news website with close ties to Donald Trump’s presidency.

Yiannopoulos is known for openly inciting bullying against transgender students at universities where he has previously spoken, and last week an anti-fascist was shot outside his event at the University of Washington campus in Seattle. The shooter, a fan of Milo’s, had sent Facebook messages to Yiannopoulos shortly before he carried out the shooting.

In July 2016, Yiannopoulos was permanently banned from Twitter for his repeated use of the social media platform to coordinate racist harassment campaigns against people of color.

CU students, alumni, as well as concerned parents and community members had repeatedly asked CU Boulder administration to cancel the event over safety concerns.  One alumnus wrote an open letter to CU Boulder Chancellor Philip DiStefano voicing their concerns about their alma mater acting as a venue for hate speech by Yiannopoulos:

“I am shocked and saddened that the university’s administration has scheduled a speaking date for Breitbart News writer and alt-right speaker Milo Yiannopoulos on campus on Jan. 25. At first, while extremely disappointed at this decision, I was of the opinion that the university should not cancel this event due to negative publicity. However, given Yiannopoulos’s recent actions at the University of Wisconsin – Milwaukee, I have no choice but to write you and demand that you cancel his speaking date immediately ….

While speaking at UW Milwaukee on Dec. 13,  Yiannopoulos openly harassed and bullied a student at the school in front of her peers, while she was in attendance. Although he likely did not know she was there, Yiannopoulos used her name, displayed her picture and said hateful and disgusting remarks about her. He gleefully endangered her to attack and abuse by her peers in and the online neo-Nazi hate machine run by Breitbart News, who was live streaming the speech …

On Wednesday morning, the administration of CU Boulder announced that “cancellation rumors are not true” and the speaking event would go forward as planned.

“We have proven that we can hold large events while respecting each other’s free-speech rights. I’m confident we can do it again peacefully…I encourage our community to express itself with the dignity and pride reflected in our Colorado Creed. Let’s show everyone what it means to be a campus that values everyone’s point of view and engages in conversation with civility and respect.”  – CU Boulder Chancellor Phil DiStefano

People started lining up to enter the Yiannopoulos event shortly before 4 PM MST.

Around 6:30 PM Unicorn Riot was live on the scene. There were several hundred people gathered to protest Milo and express their anger to his supporters. At least half the crowd appeared to be masked and wearing black, many acting together in an apparent use of the black bloc tactic which has seen a resurgence since protests began against Trump’s inauguration.

Several dozen fans of Yiannopoulos and President Trump appeared to be in the mix as well, yelling at protesters and at times fighting with them. Several people who came to hear Yiannopoulos speak were told by police at the main entrance that “even if you have tickets, you can’t get in.” One man was heard speaking into his cell phone, saying “talk to the Breitbart guy and see if you can get us in” as protesters yelled at him.

Several Trump supporters who engaged with the crowd of protesters or were standing in the nearby area had their “Make America Great Again” hats taken. When the previous owners attempted to retrieve the hats they were confronted by protesters in black bloc.

Black bloc participants stole this man's Trump hat off his head; he was unable to retrieve it. Outside Milo @ @CUBoulder pic.twitter.com/BtPHFePbtH

Trump hats were continuously burned along with Nazi and Confederate flags. One Milo supporter, who had repeatedly fought protesters, had his phone taken and thrown in to the fire as well.

One student held a sign that read “I came here to study the humanities and punch Nazis, and they just cut funding for the humanities” in reference to the viral videos of white nationalist Richard Spencer being punched in the face in Washington, D.C. on inauguration day. A group of math students chanted “Math buildings are for math!” and “Normalize vectors not hate!”  (the event was held in the CU Boulder mathematics building)

Some of those gathered to protest voiced objections to fighting Milo supporters and burning Trump hats, saying “this isn’t peaceful.” One black bloc participant we spoke with on condition of anonymity defended the decision to physically confront “alt-right” counter-protesters and burn their Trump hats:

“These ignorant Trump supporters waved Nazi flags & gave Nazi salutes while chanting “Black Crime Matters!”  We had no choice but to burn their flags & their Make America Great Again Hats.  I keep hearing from liberals that it only gives Milo more attention, but if we allow them to embolden other racists and gather in public unopposed we will only have ourselves to blame when we wake up in the reality TV version of Nazi Germany.  This is going to be a very long four years, and we will be resisting every step of the way.“

One man who told us he came out “to support Milo” grabbed a sign from a female protester and ripped it. He said that it was “because I got punched in the face.”

After the event ended and the audience began to let out, protesters determined that attendees were leaving from a back entrance (not the main entrance where the crowd had gathered) so most of them began to march around the building. At this point, some arguments and fistfights ensued between antifascists and those who had heard Milo’s speech. Several red hats were taken from Trump supporters. After a few minutes riot police began to arrive, and arrested two antifascist protesters.

Watch the live stream of the arrests below:

The two antifascists arrested at the event were both charged with Unlawful Conduct and Resisting Arrest. A third person had been arrested earlier, around 6 PM, and also charged with Unlawful Conduct for allegedly for having a mask and backpack, items which many others at the event had as well. All those arrested were given a summons to appear in court and released within a few hours. 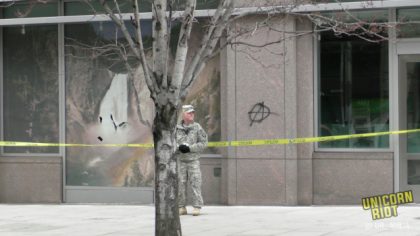 “No Peaceful Transition” for Trump as Thousands #DisruptJ20 in Washington, D.C. on Inauguration Day 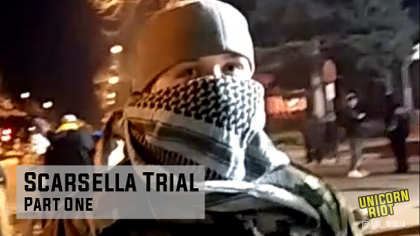