UPDATE: Charges were dropped on Monday January 30 for 4 of the 6 journalists who were arrested covering the anti-capitalist anti-fascist black bloc on Inauguration Day, including Alexander Rubinstein with RT America who was livestreaming during the action and Evan A. Engel from Vocativ. From RT:

Journalists must be allowed to do their jobs without fear of recriminations from law enforcement or the government, rights enshrined in the First Amendment to the Constitution,” – RT America

Washington, D.C. – The plan to disrupt the transition of the new U.S. presidential administration began with a “call for a bold mobilization against the inauguration of Donald Trump on January 20, 2017” and evolved into a multi-city schedule of actions spanning the nation.

On Friday, January 20, 2017, Donald Trump will be inaugurated as President of the United States. We call on all people of good conscience to join in disrupting the ceremonies. If Trump is to be inaugurated at all, let it happen behind closed doors, showing the true face of the security state Trump will preside over. It must be made clear to the whole world that the vast majority of people in the United States do not support his presidency or consent to his rule.” – crimethinc.org

DisruptJ20.org offered a schedule of events in Washington, D.C., including direct action training, blockades, marches, and rallies throughout inauguration day.

In the early morning of January 20th, Unicorn Riot reporters came upon the Qockblockade Brigade: Queer Resistance on J20 by following the rainbow flags which eventually merged with the glitter-laden dance party filling the lanes leading to a police checkpoint entry way into the inauguration ceremony.

Another blockade was in full swing on 10th and E Streets as people chanted and linked arms to create a human barrier to the check point entrances. Police were shoving protesters, at times to the ground, in order to clear a path for Trump supporters to make their way through to the inauguration ceremonies.

Clashes between protesters and police/secret service in blockade at corner of 10th and E St #j20 #disruptj20 pic.twitter.com/W7vdwsid7m

Concurrently an anti-capitalist anti-fascist bloc was underway. Anarchist media outlets It’s Going Down and SubmediaTV were tweeting updates as they unfolded.

Reports started coming through that a large group of people had been kettled by the police. The route to the mass arrest area was preceded by a trail of broken glass and black clothing discarded in the streets and alleyways.

A city block of windows including a Starbucks and Bank of America had large windows that had been smashed, as well as anarchy signs spray painted on the side of the buildings.

Windows and ATMs smashed in DC on #inaugurationday #disruptj20 pic.twitter.com/AmX6X3hhYe

A crowd taking video and photos had amassed on one side of a riot line where police were holding in a large group of people against a wall of a building. Individuals were being led out of the kettle one by one where they were handcuffed and photographed, while officers placed their belongings in plastic bags.

Members of the press were among those arrested, including Alex Rubinstein of RT America who was broadcasting via periscope during the march.

A video from inside the kettle shows the crowd singing a boisterous rendition of Bohemian Rhapsody as they wait to be led out by DCPD.

One block away on K Street between 12th and 13th a large line of riot police started launching concussion grenades into the groups that were gathered. They then corralled people in the street to force them to move down the block.

The riot line moved slowly forward in military formation while continuing to deploy flashbang grenades. Rocks and bricks were thrown at the police in what appeared to be an attempt to stop them from advancing.

Limited signal strength led to the Unicorn Riot livestream breaking up and at times the audio somewhat degrading, however in the video below, the sound of concussion grenades can be heard. The police later attempted to deny that they had deployed any grenades.

One of the limousines that had its windows smashed during the anti-capitalist bloc became a rallying point with young people sitting on the roof with the sound of the car alarm continuously echoing through the streets. Later, a plume of smoke could be seen rising above the city block as the limo had been set ablaze. Some of the journalists who were reporting on the events of the anti-capitalist march and got rounded up in the mass arrest kettle were charged with felony riot.

Journalists’ cameras and phones were confiscated by authorities after arrest. Independent journalist Shay Horse told Unicorn Riot after he was charged with felony riot and released without his gear,

I think it’s a scare tactic [directed] to people the government doesn’t see as “real” journalists. Because I view it as a violation of my work and privacy. They want us all to be silent and accept this as a needed punishment. The worst part is them trying to use me and my work as a weapon against the left and people I consider my friends. I believe they want to make it feel like even doing my job is hurting the causes and people I care about the most.”

As the Guardian has reported:

…journalists have been charged with felonies after being arrested while covering the unrest around Donald Trump’s inauguration, meaning that at least six media workers are facing up to 10 years in prison and a $25,000 fine if convicted.” – Jon Swaine, The Guardian

“These charges are clearly inappropriate, and we are concerned that they could send a chilling message to journalists covering future protests,” said Carlos Lauría, senior Americas program coordinator for the Committee to Protect Journalists. “We call on authorities in Washington to drop these charges immediately.”

The National Lawyers Guild (NLG) has already filed a class action lawsuit against the DC Metropolitan Police, the Park Police, and Acting Chief Peter Newsham over the excessive force, indiscriminate use of riot weapons, and mass arrests used by police on J20.

Acting Chief Peter Newsham had been previously named as a defendant in a lawsuit about unconstitutional policing and mass arrests during 2002 protests in Washington, D.C. against a meeting of the International Monetary Fund (IMF). The suit reads:

“Chief Newsham was previously a defendant in the mass arrest of protesters at Pershing Park in 2002 and claimed that he ordered the roundup… Chief Newsham ordered, caused to be ordered, and/or condoned the illegal mass arrest and use of excessive force…”

NLG attorneys warned about the chilling implications for constitutional rights posed by the use of violence and mass arrests by police at protests:

“If the violence inflicted by police—including chemical weapons deployment without warning in violation of DC law—represents a return to the violence protesters were subjected in decades past, MPD is clearly following the lead of the Trump administration’s far-right rhetoric and reverence of white supremacy. These illegal acts are clearly designed to chill the speech of protesters engaging in First Amendment activity.” – Maggie Ellinger-Locke, DC NLG Mass Defense Chair.

Read the full lawsuit, filed in federal court on January 20, below:


Later in the day, ABC News released video of a masked individual punching white nationalist Richard Spencer in the face while he was being interviewed by correspondent Zoe Daniel after the inauguration. The video went viral with a multitude of remixes quickly emerging.

Maybe this won’t help. Maybe this makes it all worse. But right now, it’s what I need. (co-cred @ShutUpAndrosky). pic.twitter.com/mAnHnrdbuW

The Fibonacci Sequence was also invoked as part of the viral meme. The meme then spun into an “is it okay to punch a nazi?” debate. News outlets consulted ethicists and various individuals considered to be moral leaders in society offering their responses to the question. Facebook and Twitter were lit up with a variety of answers as well. In response to Richard Spencer tweeting that he has filed police reports and a fascist group offering a bounty for information, an antifa group in Philidelphia has proactively launched a fundraiser for support in the case he is identified and charged, or physically harmed.

A website, hasrichardspencerbeenpunchedinthefacetoday.com was also created for anyone who would like to know if Richard Spencer has been punched in the face today.

Active resistance to white nationalism, the “alt-right”, and anyone currently lining up with fascist nazi ideology was a theme throughout the inauguration, starting with the large disruption of the Deploraball the previous evening.

With DC DP reporting 217 arrests made on January 20th, the legal battles of individuals facing a variety of charges including felony riot will be ongoing. The DisruptJ20 website has launched a legal fundraiser page to support the arrestees.

We will continue to provide updates on the court cases as well as the lawsuit.

Watch full livestream coverage here (We were experiencing limited signal to livestream from the ground and at times only audio is available). 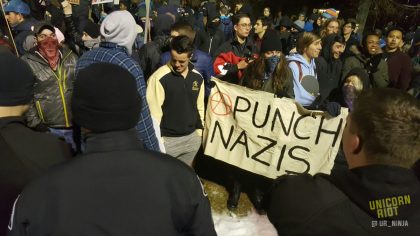