Minneapolis, MN – The legacy of Malcolm X continues to bare prominence across the world fifty seven years after his assassination. In Minneapolis, the fourth annual Malcolm X Conference took place on May 27, 2017 at North Community High School. The keynote speaker of the conference was the Chairman of the Black Panther Cubs, Fred Hampton Jr., and the panelists were Mel Reeves, Professor August Nimtz, Dr. Rose Brewer, Kenya McKnight, and Mr. Hampton Jr.

Unicorn Riot was live to document the conference.

The event was mostly organized by a small unit of friends and very active community members volunteering their time and money to create the conference free to the public, namely, Goddess of The Morning Star and Thandisizwe Jackson-Nisan.

The beginning of the conference, themed “Revolutions are Generational,” was filled with Black artists and youth doing comedy, spoken word, hip hop, singing, and speaking about and honoring Malcolm X.

Around noon, Chairman Fred Hampton Jr., gave a speech the crowd of about seventy five people. He spoke about the Black Panther Cubs, his awakening into this world (directly after the assassination of his father, Chicago P.D. put a gun to his mother’s belly while she was eight months pregnant), the legacy of Malcolm X, self-determination, organizing, and more.

The next part of the conference was a very intellectually and revolutionary-themed panel discussion that featured a few questions revolving around Malcolm X.

The discussion from the questions focused on Malcolm X’s legacy, Fred Hampton Jr.’s father and the Black Panthers, what is being revolutionary.

After lunch was served, workshops were had. Unicorn Riot recorded the workshop that Chairman Fred Hampton Jr. co-led, along with Kenya McKnight.

Watch the full archive of livestreams from the conference below:

After the conclusion of the conference, Unicorn Riot spoke with Chairman Fred Hampton Jr. about the Black Panthers, the Black Panther Cubs, counter-insurgency, and self-determination, among other things. See the interview below: 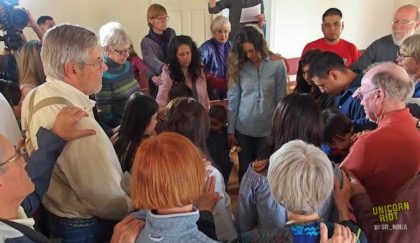