Washington, DC – A long-awaited motions hearing took place on Thursday, July 28 in the case of the 197 people facing 75-80 years in prison after being mass arrested in the vicinity of the anti-capitalist, anti-fascist ‘black bloc’ protest march during Donald Trump’s inauguration as president on January 20, 2017 (J20).

At a 9:30 AM rally before the motions hearing, representatives from different DC community organizations spoke in support of the defendants and demanded that the charges be dropped. The rally ended around 10:30 AM and approximately 100 people filed into DC Superior Court.

The sheer size of the case became apparent as Judge Lynn Leibovitz’s courtroom filled to capacity before the motions hearing began at 10:30; at least two dozen attorneys and their clients had to listen in an overflow room, which had audio only, along with dozens of supporters and spectators. Thursday’s hearing was scheduled to hear arguments regarding two motions brought by the defense – a motion to dismiss the superseding indictment and a motion to compel instructions given to the grand jury that returned the indictment.

Much of the discourse throughout the day centered on legal minutiae and case law regarding the application of statues to determine what exactly constitutes the rioting offenses defendants were charged with.  As most are not charged with any specific crime other than their presence, the government alleges they willfully participated in a riot by undertaking otherwise protected first amendment conduct – gathering and marching as a group, wearing black and/or bandanas, and cheering and or chanting – in the vicinity of several store windows being broken.

Attorneys representing the protesters insist that merely being present at a protest, and not leaving when others committed crimes, was not a factual basis for finding probable cause for the mass rioting charges.

Defense counsel also challenged Count 2 of the superseding indictment, which charges all of them with “felony engaging in a riot” – a charge which does not exist in the riot act (DC’s Riot Act contains a misdemeanor engaging in a riot charge but no such felony.) Prosecutors had also brought a charge of “rioting and inciting to riot” which is not an existing charge under DC law.

Lawyers for the protesters also took issue with how the indictment refers to all persons charged as the “rioting defendants” while specific criminal acts named in the indictment – breaking windows, throwing rocks at police – are ascribed to “participants in the black bloc.” The distinction between all of the defendants, who are charged as a group, and the sub-group which charging language actually names as committing overt criminal acts, is not clear in the indictment.

The prosecution agreed without argument to concede dismissal of Count 11, which charged some defendants with misdemeanor assault on a police officer. Kerkhoff reportedly plans to refile the charges, potentially replacing the assault on an officer charge with resisting arrest.

Based on the US Attorney’s repeated mistakes and misapplications of the law, defense attorneys say it is a reasonable possibility that serious flaws exist in the legal instructions given to the grand jury that returned the superseding indictment. Defense counsel pointed out that since the government admitted they incorrectly charged at least part of the indictment, “we have the right to be concerned if the government got the law right in front of the grand jury.”

The defense also alleged that the indictment did not pass constitutional muster as it threatened to have a chilling effect on protected first amendment activity, while also lacking particular evidence of illegal conduct ascribable to most indicted individuals. Two journalists are still named in the indictment along with the protesters – Alexei Wood, who livestreamed the entire march leading up to the mass arrest, and independent journalist Aaron Cantu. Both did not have their charges dismissed when other reporters did in February.

Defense attorneys repeatedly blasted the indictment as unconstitutional, not meeting probable cause, and generally incoherent and unreasonable, with statements including “I’ve never seen an indictment like this that doesn’t name specific people for specific acts” and “I don’t know what the indictment means.”

Another attorney, who represented two women who showed up late to the march, said there is no way a grand jury could establish probable cause that her clients were rioting as they had traveled only 3 blocks over a period of 7 minutes before they were herded into a police pen and mass arrested with the others. Kerkhoff countered that the two women had in fact willingly engaged in a riot because they “were trying to find the black bloc” and “adjusted their masks.” Another defense attorney questioned the use of the term ‘black bloc’ saying the term was being used loosely by the prosecutor to refer to all “protest gear” and thus had first amendment implications.

Judge Leibovitz ended by saying she would not be making a ruling on the motions anytime soon and would be taking the defense and prosecution’s arguments under advisement. She asked the US Attorney to file a supplemental brief to address the motions to dismiss the indictment and compel disclosure of the grand jury instructions. She is expected to make a ruling sometime in the coming weeks after reviewing supplements to be filed by both the prosecution and defense. The first trial date for a group of inauguration protesters is set for November 20, 2017.

After #J20 hearing let out, we caught w Sam from @dclegalposse again for an update on where things stand until Judge Leibovitz makes rulings pic.twitter.com/GX736cIRRY

Aside from a few individuals who had their charges dismissed, the vast majority of those caught up in the mass arrest, where DC police chased the anarchist march into a trap and held people without food, water, or a restroom for hours, were charged with numerous felonies in a superseding indictment returned by a federal grand jury in April. Last month the American Civil Liberties Union filed a lawsuit against the DC Metro Police over the mass arrest, saying cops not only violated the constitution but also physically and sexually abused protesters in a deliberate and punitive fashion.

There appear to be several political conflicts of interest in the prosecution of Trump inauguration protesters that contribute to the highly unusual nature of the case. Charges are being brought by Assistant US Attorney Jennifer Kerhkoff, who works under DC’s US Attorney Channing Phillips, who then answers to Attorney General Jeff Sessions, who recently instructed federal prosecutors to always seek the maximum penalty when bringing charges.

Greggory Pemberton, the lead DC police detective on the case who has raided protest organizers, is DC treasurer for the Fraternal Order of Police, a far-right police union which endorsed Trump for president. The DC police Unit 7D which helped Pemberton raid the home of a protester named in the indictment was singled out in a complaint filed by attorneys earlier this week for wearing white supremacist paraphernalia while on duty. DC Police Chief Peter Newsham also has a history of being sued for illegal mass arrests of protesters. 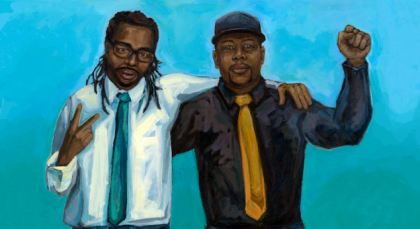 Action to ‘Drop the Charges’ on Louis Hunter 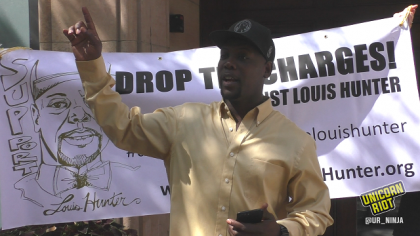