Denver, CO – On the morning of Friday, May 12, 2017, Jeanette Vizguerra left church grounds for the first time in nearly three months. She had been living in sanctuary since February 15, 2017, at First Unitarian Society of Denver and at First Baptist Church, away from her four children.

Vizguerra has lived and worked in the U.S. for over 20 years and is recognized internationally for her immigrant rights work and other activism. One month ago, as she was still in sanctuary, Vizguerra was named one of TIME Magazine’s “100 Most Influential People” of 2017.

Ever since Vizguerra migrated to the U.S. from Mexico, she has worked tirelessly for human rights and immigrant rights. She started working as a janitor and became a union organizer, which led to her owning her own cleaning and moving company. All the while organizing rallies, protests, and other events, to spread awareness and promote change in immigration policy.

For Vizguerra, it was not a question of “if,” but “when” she would have to enter into sanctuary:

My experience being here, through the harshness that is being in a confined space, has been good because I have a space where I can be safe, where my children can visit me, and where we can spend time together.

It doesn’t surprise me because I founded sanctuary. I watched it grow and made it knowing that there would come a time when I would need it.”

A stay of deportation means their deportation proceedings have stopped and they are temporarily legally allowed to stay in this country. They each have two years to work toward permanent legal status.

Hernandez Garcia, who was the first undocumented immigrant to enter into sanctuary in Colorado, also stayed at the First Unitarian Society of Denver. He spent 9 months on the church’s grounds until ICE told him he was no longer a priority for deportation.

However, on Wednesday, April 26, 2017, Hernandez Garcia was detained while he was working as a flooring contractor and was held at the GEO Group’s ICE Detention Center in Aurora, CO until May 2, 2017.

On May 2, he was initially granted a brief reprieve so he could attend his daughter’s high school graduation.

Vizguerra and Hernandez Garcia received the stays one week after Thomas Homan, the acting director of ICE, wrote in a letter to congress that ICE would be tightening its policy for granting “stays of removal in connection with private immigration bills.”

Senator Michael Bennet (D-CO) and Representative Jared Polis (D-CO) have written five private bills on Vizguerra’s behalf. This tactic’s purpose is primarily to grant temporary stays of removal through legislation, rather than through the ICE bureaucracy, while federal officials continue to review their cases. For Vizguerra, these private bills have proven effective based on the five stays of deportation she’s been granted.

While I’m grateful to be able to pursue my legal fight, so many others aren’t allowed any path under this system even after decades of contributing our labor and lives to their communities and families. Marco Tulio, father of three, was detained at his check in yesterday in Phoenix. He also claimed Sanctuary and was granted relief in the past. These times are very uncertain for so many communities.”

The man mentioned by Hernandez Garcia, Marco Tulio Coss Ponce, who is also a sanctuary movement leader, was detained and deported back to Mexico on May 11, 2017.

He was detained during a scheduled check-in with federal immigration officials in Phoenix, Arizona. His attorney, as well as ICE officials, told Coss Ponce he would be submitting an application for a stay of removal from the country and explore other options during the check-in.

Coss Ponce lived in the U.S. for nearly 20 years, and spent time in sanctuary at the Shadow Rock United Church of Christ in north Phoenix in 2014.

Ken Heintzelman, the church’s pastor, described the detainment and deportation as “a total blindside.”

Back in Colorado, Isidro Quintana Chavez, who has lived in this country since he was five years old and has Legal Permanent Resident status, was released from the GEO Group’s ICE Detention Center in Aurora, CO, on Monday, May 15, 2017, after being held for two months.

Chavez was detained regarding criminal convictions from over 20 years ago.

During his court hearing on Monday, a dozen character witnesses were prepared to testify on his behalf, but Judge Steven Caley only needed to hear a handful of testimonies before releasing Quintana Chavez and reaffirming his legal status.

Another victory for the undocumented immigrant community happened on May 3, 2017, to the sole person currently in sanctuary in Denver: Ingrid Encalada Latorre.

Encalada Latorre had a court hearing on May 3, which was the first time she left the Mountain View Friends Meeting’s property in nearly six months.

Judge Dennis Hall ruled in Latorre’s favor to allow her to move toward reducing a felony conviction of identity theft to a misdemeanor. If she can prove that her previous lawyer gave her bad advice and was incompetent, which is why she plead guilty to the charge, she will be able to re-try her conviction. If her conviction is reduced to a misdemeanor, she is able to apply for cancellation of removal–the halt of deportation proceedings.

We are human beings. We are your neighbors and friends living and working alongside citizens. We will continue to resist until our full humanity, contributions and place in this country are recognized.” – Ingrid Encalada Latorre

Unicorn Riot will continue to cover these stories.

Watch part of our interview video with Vizguerra, while she was still in sanctuary, below: 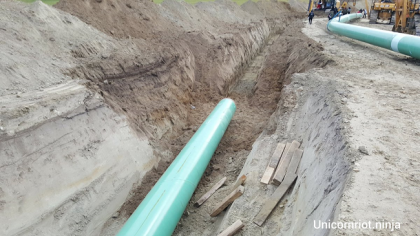