Denver, CO – On Friday, May 19, 2017, people living without housing in downtown Denver were approached by police and given the equivalent of eviction notices. These interactions with the Denver police are not new or surprising for unhoused residents, but these most recent interactions stand out because three weeks ago the class action lawsuit against Denver for these consistent and unconstitutional sweeps was class certified.

Because of this certification, thousands of people without housing in Denver whose belongings have been taken without due process of law, and who are constantly told to “move along” during the day and night, will be able to pursue justice.

And while this lawsuit progresses, as Denver police made clear Friday morning, the city of Denver plans to continue to sweep people and confiscate their property.

We were live streaming during the sweep on Monday, May 22, 2017. These “sweeps” consist of Denver police and public works, along with help from inmates, forcing people without housing to “move along” to somewhere else. The residents without housing are told to gather their belongings, and anything they can’t move immediately can be stored for them in a storage facility for 30 days. Any of their belongings that they aren’t able to move at that moment, and choose to not be stored, are thrown away.

Below is our live stream footage from Monday:

Below are previous notices of impending sweeps, which use nearly identical wording as the above flyer and cite the encumbrance ordinance.

On the back side of the flyer handed out Friday, shelter information is provided, categorized by “Single Women,” “Single Men,” “Unaccompanied Youth,” and “Transgender Individuals.”

As we’ve highlighted in our previous coverage of Denver’s sweeps, there are many reasons why people choose not to go into shelters. One reason is not wanting to sleep apart from their partner of a different gender; those who seek shelter are organized and separated by gender. A few more reasons include:

In one of our videos, Roy, a Denver resident without housing, expresses his disapproval of shelters and the city’s sweeps:

Our lives are already miserable enough. All we want to do is rest. If they want to help us like they claim, find us affordable housing. Help us get housing instead of harassing us and making it a crime to rest. Not being forced to go into a shelter that, last time I went, I got ate up by bed bugs. Last time my wife went here to Samaritan House, they keep it so hot in there, she’s asthmatic, and she nearly had an asthma attack.”

Below is an image from a report published on April 3, 2013, by Denver Homeless Out Loud entitled “The Denver Camping Ban: A report from the Street.” It further highlights why shelters are not the answer for many people. With shelters not being the answer for many people on the streets, advocates encourage the city to stop criminalizing unhoused people and to invest in truly affordable housing for no-to-low income individuals and families, including alternative housing models like tiny homes.

After years of relentless hard work and movement-building, the Colorado Village Collaborative (CVC), which is made up of Denver Homeless Out Loud, The Interfaith Alliance of Colorado, Bayaud Enterprises, and many more groups, finally got a tiny home village approved by the city (with no help financially from the city). They start construction Saturday, May 20, 2017.

The construction of the village begins nearly two years after another tiny home village, Resurrection Village, was torn down by the Denver Police Special Weapons And Tactics (SWAT) Team. Karen Seed, one of the organizers and builders of that village, pointed out to us at that time that it was built as more of a demonstration:

Below is our video of Saturday’s tiny home build day.

Unicorn Riot will continue coverage on the current targeting of Denver’s unhoused population, as well as the rise of Beloved Community Village, and will provide updates as they become available. 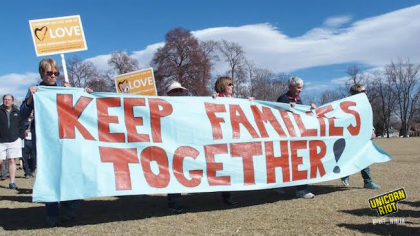 Jeanette Vizguerra, Among Others, Celebrate Victories Against ICE Deportation Attempts