Charlottesville, VA – Messages from a chat server run by Unite The Right organizers Jason Kessler and Eli Mosley show conversations that coordinated much of the white supremacist activity over the weekend leading up to the deadly terrorist attack by neo-Nazi James Alex Fields, Jr.

The chats took place over the app Discord (favored by gamers) and included organizers from a variety of openly violent white supremacist organizations. Many white supremacists left Charlottesville after the Unite The Right rally in Emancipation Park was shut down and they were chased back to their vehicles. However, some chose to remain, even after James Alex Fields, Jr. drove at high speed into a crowd of counter-protesters, killing local paralegal Heather Heyer.

The attendees of Unite The Right were not dissuaded by her death and were still looking to hold gatherings to continue to try to spread their anti-Semitic and white power messaging.

Far-right Florida-based lawyer Augustus Invictus inquired about a planned (and subsequently canceled) “after-rally” on Saturday night. Another chat participant stated his interest in assisting with bodyguard work for Jason Kessler during his Sunday press conference regarding Saturday’s events.

Kessler ended up being chased away from his press conference by an angry mob, and was dragged away to safety by a police officer in a riot helmet. Unite The Right participants also started to discuss the online blowback to their activities that weekend, including a hack and data breach targeting the white supremacist independent media outlet Red Ice Creations.

Most, if not all, of the white nationalists behind Unite The Right are extremely active on Discord and coordinate activities using several different servers. After Heather Heyer was murdered early Saturday afternoon, users on the Charlottesville 2.0, Alt-Right, 4th Reich and other Discord servers quickly began both mocking and rationalizing her death.

In another alt-right Discord server, one user complained that Discord staff had notified him that his account would be shut down. Another responded, “hello fellow semites I’m here to talk about racecars.”

Neo-Nazis chatting on the ‘4th Reich’ Discord server early Saturday afternoon quickly tried to manipulate and obfuscate Heather Heyer’s hit-and-run death by falsely blaming it on an individual they claimed was a deranged leftist drug user. One of them also praised Trump’s comments about Charlottesville as serving their interests.

If there is violence he has to condemn it really. Its pleasing he hasn’t singled out white nationalism.” – Discord user ‘Einen777’ in ‘4th Reich’ chat server

Unicorn Riot has also started reviewing earlier incitement messages and coordination. Here are a few examples of material from the chats intended to promote bigotry and violence. In July 2017, users specifically discussed the legality of plowing vehicles into protesters.

Attendees of #UniteTheRight in #Charlottesville discuss legality of plowing into protesters with a vehicle, less than one month before rally pic.twitter.com/bVOAisOOZG

Please look out for our upcoming additional installments in our investigation into leaked materials from white supremacist Discord servers. 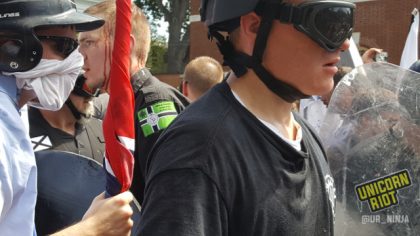 LEAKED: The Planning Meetings that Led Up to Neo-Nazi Terrorism in Charlottesville 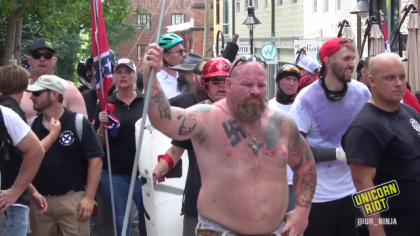