The various neo-nazi, white supremacist, and alt-right factions that descended onto Charlottesville relied heavily on Discord chat servers for many aspects of their operational and logistical planning for the series of violent white supremacist mob gatherings last weekend that ended in neo-nazi terrorist James Alex Fields, Jr. killing 32-year-old Charlottesville local Heather Heyer and injuring at least 20 others.

“Discord has had a monopoly on communication between members of the far right hate groups for the past six months if not more. Almost every leader in this movement has an account there. So much of the coordination and collaboration of Charlottesville took place on Discord.” –Keegan Hankes, intelligence analyst, Southern Poverty Law Center, quoted in The Guardian

The Unite The Right voice chat meeting held on August 10, 2017 to coordinate participants for days ahead, appears to have been facilitated by white supremacist alt-right organizer Eli Mosely.

“The main thing with social media stuff is to be paying attention to Discord the day – from basically from now until the end of the rally.” – Eli Mosley in August 10, 2017 “Unite the Right” Discord voice chat

“If you don’t have the Discord app on your phone, get it.” – Participant in August 10, 2017 “Unite the Right” Discord voice chat

The conference-call style discussion centers around a “General Orders” (rules and guidelines) document (PDF) that Mosely created for Unite The Right attendees. The identities of other speakers on the group voice chat are currently unknown, but they appear all to be organizers and/or attendees of Unite The Right. One speaker addresses another person on the call as “Illegal Aryan.” Illegal Aryan is the internet alias of Mark Daniel Reardon, a Philadelphia resident who attended the neo-Nazi gathering in Pikeville, KY on April 29. Reardon was exposed earlier this year as the person behind racist flyers that were put up at UPenn campus in Philadelphia.

The recordings paint a clear picture of armed neo-nazis, klansmen and “alt-right” militants descending en masse upon an unwilling city, knowing locals are hostile to them, and planning to do harm to anti-racists and others who would oppose them.

The white supremacist organizers discussed their belief that police officers were generally sympathetic to them, as well as their personal openness to calls for genocide of non-white people under the condition that people expressed this view in a calculated PR-friendly fashion:

“The purpose of this is to gain sympathy for pro-white advocacy as well as a general uniting of the right wing against these communists who are gonna come shut this down, okay… Going up to, like, MSNBC and them interviewing you and you saying like, “yeah, I actually think we should kill every non-white on the planet”…like again, I don’t necessarily like have an issue with listening to that on a podcast or whatever, but if you are gonna do something like that, even if it’s your true belief, that’s not the objective of this rally, so we should try to keep it with the objective of trying to gain sympathy for a pro-white rally.” – Participant in August 10, 2017 “Unite the Right” Discord voice chat

The Unite The Right leaders speaking on the call spoke about the “green”, “yellow”, and “red” contingency plans to be carried out depending on the results of a court case regarding the status of their rally permit, and the willingness of police to collaborate with their security. They also stated their intention to innovate new ways to escalate tactics to use against their anti-racist, anti-fascist opponents.

“I don’t know how we’re going to fix this problem in the future, but whenever we do public events, they are going to shut us down, or they’re gonna try to shut us down, until we start doing something about it, which is something we’re working on obviously.” – Participant in August 10,2017 “Unite the Right” Discord voice chat

Unite The Right also spoke about committing anti-semitic acts of genocide, with one organizer saying “If we say on social media we’re gonna gas the kikes tomorrow, we haven’t gassed the kikes yet.”

When one of the alt-right leaders speculated about anti-racist protesters trying to use noise to drown out speakers at the Unite The Right podium, another voice butted in to say “well then they get attacked by right wing death squads.”

The audio here was collected by an anonymous source from the August 10, 2017 planning meeting on the “Charlottesville 2.0” Discord server.

On General Conduct: “realize that we are trying to gain sympathy from whites and the general right wing. Please refrain from roman salutes during the rally and understand that cameras are all over the place at all times.”

On Social Media: “Pay attention in Discord and those [white supremacist Twitter] accounts to see the hashtags we are using. It will be important to make sure everyone not at the event is using their social media to amplify what is going on.”

“This is actually the importance of getting in to the [Discord] groups. If you network you’ll be able to do it. In the future we are not openly planning these, we are not announcing these events three months ahead of time. So if you are inside our networks you’ll be able to go to these things.” – Participant in August 10, 2017 “Unite the Right” Discord voice chat 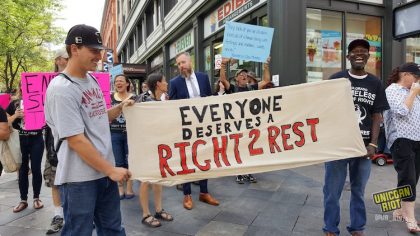 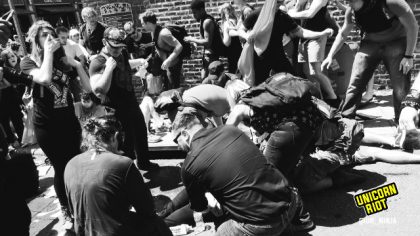 LEAKED: Chats of #UniteTheRight Reacting To Murder of Heather Heyer