Charlottesville, VA –  The Unite The Right rally formed out of a collaborative effort between several white supremacist and neo-Nazi groups, including the various organizations making up the ‘Nationalist Front.’ The Nationalist Front includes the Traditionalist Worker Party, the National Socialist Movement, the League of the South, and Vanguard America. After-action analysis of the events of August 12 have generally concluded that the Nationalist Front contingent initiated violent actions and provoked responses by deliberately marching into anti-racist counter-protesters and attacking them. In particular, Vanguard America has risen to infamy since August 12 as a result of evidence suggesting James Alex Fields, Jr., who drove his car into a crowd, killing Heather Heyer, may have been a member.

Unicorn Riot has obtained chat logs taken from a Vanguard America Discord server called Southern Front. These logs provide unique insight into the group’s internal dynamics and its relationships with other white supremacist organizations, as well as directly revealing how its leaders and members talk with each other when they believe they are in private conversations and can openly express their extremist calls for violence in the name of white supremacy.

The Vanguard America Discord logs are now available in a searchable form on Unicorn Riot’s Discord Leaks data journalism site, developed by a team of volunteer developers. The personal data of people targeted by the far-right for doxing have been redacted.

The Southern Front server logs, containing over 27,000 new messages, can be accessed online at the Unicorn Riot Discord Leaks database at discordleaks.unicornriot.ninja.

The organization Vanguard America (now largely splintered into a new group known as ‘Patriot Front’) is structured as a paramilitary organization with roles like ‘commander’ and ‘officer.’ Members are expected to meet regimented, required activities such as live action drills and national flyering operations. The group is organized into ‘districts’ containing all members in the states making up a given region. Each ‘district’ then receives instructions and commands from a centralized national leadership.

An anonymous source with access to the Discord server for Vanguard members in the southern states (the area marked in red above) provided us with chat logs earlier this year. The server, named ‘Southern Front’ (possibly under a different name previously) shows different members of the neo-Nazi group sharing small talk, discussing their shared ideologies and desires to commit murder, as well as planning rallies and propaganda campaigns.

The leader of the group until recently was Dillon Irizarry (aka Dillon Ulysses Hopper), a former Marine Corps recruiter from Roswell, New Mexico.

Through a protracted internal power struggle that culminated around the time Unite The Right took place in Charlottesville on August 12, Dillon’s second-in-command, 18-year-old Texan ‘Thomas Ryan’ (real name Thomas Rousseau) seized control of most of Vanguard America’s Discord servers, renamed the group Patriot Front, and the same organization appears to have continued operating under him.

The Discord server logs we received began on May 16, 2017 when the national Vanguard America server was broken up into regional servers and the Southern Front server was created. A recurring emphasis is placed on the importance of local organizing, with members encouraged to travel to meet up with each other, and recruit new members where they live. In one of the earlier messages logged in the #updates channel in June, then-second-in-command Thomas Rousseau told members that Vanguard America was a 501(c)(3) nonprofit organization, and encouraged members to write off any Vanguard-related expenses on their taxes. While the schism in the national organization in which Thomas seized control did not take place until August, the content of the chats in the Southern Front server shows consistency, indicating that the current ‘Patriot Front’ group is more or less the same as Vanguard America, but no longer tied to the official entity with the ‘Vanguard’ name that is assumed to still be controlled by Dillon Hopper.

The chats contain frequent fawning references to Nazi history, with many comments expressing sentiments such as “OMG I love Hitler so much.” Comments containing extensive rationalizations for denying the holocaust are made alongside unironic calls to genocide such as “gas the kikes race war now.”

One factor that distinguishes Vanguard America/Patriot Front from more media-sensitive ‘alt-right’ white supremacists, is their open, unambiguous embrace of Nazi and fascist doctrines. Thomas Rousseau, at one point, assigned Mussolini’s Doctrine of Fascism as required reading for all members of the group. Another member compared the group to the volunteer paramilitary units of German veterans that helped Hitler seize power, remarking “Vanguard America is the new freikorps.”

Members also discussed carrying out vandalism and other attacks against Jewish gathering places in their area, with one chat user calling for others to “come help me possibly allegedly poster this synagogue.”

Vanguard America/Patriot Front members on Discord repeatedly expressed desires to murder Jews, people of color, and antifascists. The chat also repeatedly references the white supremacist sci-fi/fantasy novel The Turner Diaries, in which all non-whites are exterminated in a global race war. (“The day of the rope” is a Turner Diaries reference.)

Several messages also praise white supremacist church shooter Dylan Roof, at times referring to him as “Saint Roof.” Comments inciting or relishing death and violence made in the Southern Front server include, but are not limited to, the following:

On June 11, Vanguard members involved in the Southern Front Discord chat tried to ‘subvert’ a rally being held by Oath Keeper militia members in Austin, TX. Texas neo-nazi William Fears was attacked by a militia member for attempting to hand out signs with racist memes drawn on them. Video of Fears yelling “these are good memes!” and being attacked by a latino Oath Keeper quickly spread over the internet.

In the Southern Front chat, District “leader” Thomas Rousseau identified Fears as “working closely with us.” Another Southern Front Discord user, ‘SonderSchutz TX’ agreed, saying “yeah that’s the guy that was with us.”

William Fears would go on to be arrested with two other Nazis, including his brother, Colton Fears, after the trio attempted to shoot and kill anti-racist protesters following Richard Spencer’s appearance at the University of Florida on October 19.

In July 2017, Southern Front member ‘NateTheGreat’ told his neo-Nazi comrades that he was preparing to work as “a correctional officer for the Georgia Department of Corrections”. After he began his employment with the Georgia DOC, he posted a racist message about an inmate at his facility. (‘NateTheGreat’ also posted eight different messages containing the word ‘nigger.’)

We asked Georgia Department of Corrections (DOC) for comment on NateTheGreat’s Discord messages, and they indicated that they had opened an investigation. We will update this story in the event that Georgia DOC provides us with a more substantial comment.

Vanguard America members were still active on Discord throughout the events surrounding Unite The Right on the weekend of August 12. The Southern Front logs provide a unique window into how members reacted to news that James Alex Fields, Jr. had been marching alongside Vanguard just before he murdered Heather Heyer and injured many others by driving his Dodge Challenger into a crowd of anti-racist protesters.

Immediately after Fields carried out his car attack, Southern Front Discord user Eric TX asked “Is he one of ours?” to which Vanguard member ‘Stormbjorn’ responded “Yeah. I think.” A few hours later, a Vanguard America member with the username ‘The Don GA’ wrote “This is fucking awesome.”

Others shrugged off the fact that their group was now directly tied to Heather Heyer’s murderer in the public eye. “He isn’t VA. Nobody knows him…what he did was funny anyway,” remarked Southern Front user ‘BraeJager TX.’

Some Vanguard members were not as convinced that Fields wasn’t in fact one of their own. “I need a straight fucking answer on Fields,” wrote Discord user ‘Piazrro-TN’ on August 13. “Was he VA or not? If not, why was he dressed similar to us and surrounded by us?”

Despite confusion regarding Fields’ exact affiliation on August 12, the Southern Front chat quickly shifted into a general celebration of his murder of Heather Heyer, as well as the other acts of white supremacist violence carried out in Charlottesville.

‘SDO Philip-TX’ wrote, “This was the biggest victory for our movement history. It was glorious. We hospitalized dozens.” “If this guy wasn’t such a loser“, wrote ‘BraeJagerTX’, “I’d suggest we claim it. Sort of like how Islamic idiots claim random terrorists…it would be a funny trigger.”

Group leader Thomas Rousseau responded to these comments from members by clarifying that Vanguard America’s statement distancing itself from Fields “never said that he did anything wrong, just clarified that he wasn’t a member.” Vanguard officer ‘SCO Philip-TX’ agreed: “Fields did nothing wrong, fam.”

Discord chatter in the immediate aftermath of Unite The Right foreshadows the later decision to change the group’s name from Vanguard America to Patriot Front. Southern Front member ‘Eric TX’ suggested a name change as a cautionary measure, noting, “getting possibly labeled as a terrorist group is bad, look at national action…Thomas should have our info, we just regroup under a different brand.”

The cell of former Vanguard America members, now apparently under the ‘command’ of 18-year-old Thomas Rousseau, also has ties to Robert Ray, (aka ‘Azzmador’) of the Daily Stormer, who joined the Southern Front chat server in July 2017.

Ray appeared alongside Vanguard members at rallies in Texas, and users in the Southern Front server lobbied Unite The Right organizer Jason Kessler to list Azzmador as an official speaker at the event.

Like Vanguard America, “Daily Stormer Book Clubs”, played a major role in organizing neo-Nazis to turn out in large numbers in Charlottesville. Comments made by ‘Azzmador’ in the Southern Front server further clarify that the ‘Stormer Book Clubs’ are not in fact intended for literary enjoyment, but for organizing Nazi violence.

Both Ray and Thomas Rousseau, along with many members of the newly rebranded ‘Patriot Front’ have been involved in recent incidents in Texas. Both were involved in an attempted attack on the Houston Anarchist Book Fair on September 24, 2017. More recently in November, a group of Patriot Front members led by Rousseau conducted a similar appearance outside Monkeywrench Books in Austin. They appeared to be attempting to intimidate those inside the anarchist, volunteer-run business and falsely implicate them in the recent church shooting in Sutherland Springs, TX.

Patriot Front is also listed in an internal document among the different white supremacist and neo-Nazi groups working with Richard Spencer during his October appearance in Gainesville, FL. Most recently, several young men were seen wearing Vanguard America hats at the October 28 neo-Nazi ‘Nationalist Front’ gathering in Shelbyville, Tennessee. 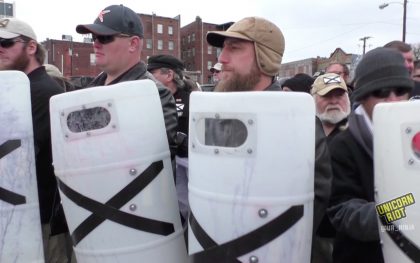 Anonymous Takes Down White Supremacist ‘League of the South’ Websites 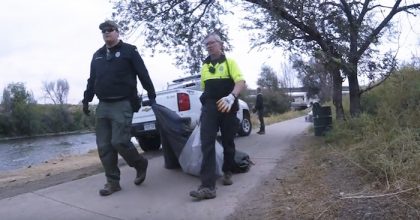