Washington, DC – A ‘speakout’ event took place on Sunday outside the Washington DC Metro Police Headquarters. The rally was held in part to condemn the aggressive prosecution of Trump inauguration protesters arrested on January 20, over two hundred of whom face up to eighty years in prison. It was organized by ‘Smash Racism DC’, a coalition made up by several different local organizations. Two white supremacist ‘alt-right’ rallies also took place in Washington, DC on the same day. What was originally planned as one white nationalist unity event ended up splitting into two competing rallies after some ‘alt-right’ personalities refused to share a stage with the famously punchable Richard Spencer.

The call-out for the anti-fascist gathering also expresses solidarity with victims of recent deadly attacks by white supremacists, and addresses the irony of authoritarian far-right racist groups organizing under the banner of “free speech”:

The right wing can have their sham “free speech” rallies, but we know they are mobilizing to deny even the right to exist to those who don’t look like them…Unlike the right wing, we actually are facing state repression and we have a legitimate fear of our speech being taken away—repression that the fascists hypocritically endorse. We must rally together to show all that we won’t be silenced, and we won’t let the state or the right wing mobilize to take our right to assemble, our right to protest, or our right to exist. We will rally at the headquarters of one of the worst suppressors and deniers of speech—the police.“ – Smash Racism DC Shortly before 3 PM, the crowd took the streets in downtown DC and marched behind a formation of antifascist flags, banners, and spider puppets.  The group eventually dispersed without incident.  The white nationalist events taking place elsewhere in the city also ended around the same time but there were no physical confrontations reported between any of the various groups.

After the ‘speakout against fascism & state repression’ at DC police HQ, antifa took their message to the streets https://t.co/grKWXzA4US pic.twitter.com/qQ8gOKdjkz

Recently in Chicago, IL we spoke with Olivia, one of the 200+ people charged and indicted after police surrounded and mass-arrested everyone in the vicinity of the antifascist ‘black bloc’ march during Trump’s inauguration on January 20.

In February a federal grand jury returned an indictment on counts of Felony Riot, with sentences of up to ten years, for 214 individuals swept up in the kettle. On April 27, a new superseding indictment was issued, adding several more felony charges to all defendants, with many now facing potential sentences of up to 80 years. The indictments generally do not refer to individual defendants but refer to the collective guilt of those who chose to engage in an anarchist protest, at times citing protest chants, or black clothing, as evidence of a “conspiracy.”

Last week, the American Civil Liberties Union filed a lawsuit against DC police over constitutional violations, physical and sexual abuse, and other violations carried out by DC and US federal authorities during the mass arrest. 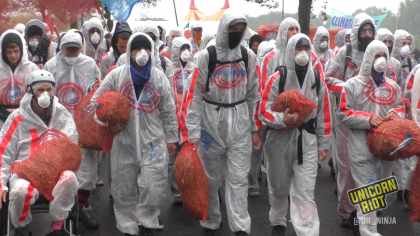 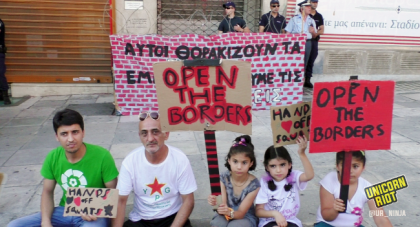 Greece: Action of Solidarity With Squats and Against Evictions