While billed as a free speech rally and conservative unity event, the event is primarily being promoted by violent white supremacist groups, including Neo-Nazi organizations such as the Traditionalist Worker Party and the National Socialist Movement. Former KKK Grand Wizard David Duke will also be attending. The rally is planned to take place at Emancipation Park, in protest of plans to remove a statue of Confederate general Robert E. Lee from the park.

Charlottesville’s city council stated earlier this week they would grant Unite The Right organizer Jason Kessler a permit for the rally, but only if it was held in McIntire Park instead of Emancipation Park. Kessler responded by saying the rally would still be held at Emancipation Park. Kessler has claimed that he is not organizing a white supremacist event but that the event is merely “pro-white.” He has hired members of the ‘Warlocks’ biker gang to act as his personal security detail.

Unite The Right organizers have been reporting various logistical hurdles and opposition from locals. AirBNB has reportedly closed the accounts of various white supremacists who tried to reserve lodgings to attend Unite The Right, and porta-potties reserved for the rally are no longer being provided. An “afterparty” planned to solicit funds from Unite The Right attendees after Saturday’s rally was also reportedly cancelled on Friday after a series of venues refused to host it.

The event seems likely to be a re-run of previous white supremacist rallies attempting to organize and recruit in southern states. Unite The Right headlining speaker Matthew Heimbach helped organized a “Defend White Working Families” rally in Pikeville, KY on April 29.  When we spoke to Heimbach in Pikeville, he stated that he believes people in interracial relationships belong in re-education camps and that Hitler was a good person.

Video of Heimbach Interview in Pikeville can be seen below:

When we were in #Pikeville, we were able to ask some questions to Matthew Heimbach of the neo-Nazi Traditionalist Worker Party: pic.twitter.com/TrkcHW7QSp

Other featured speakers to address the Unite The Right rally include Richard Spencer, Neo-Nazi podcaster Mike Peinovich, as well as internet personality Tim Gionet (aka “Baked Alaska”), a former tour manager for disgraced Breitbart editor Milo Yiannopoulos. Over the last year, Gionet has progressed from identifying as a libertarian to parroting white supremacist talking points, and recently livestreamed himself attempting sexual advances on a 13-year-old girl. Gionet and friends also claim that an Uber driver kicked them out of their ride on Friday afternoon in Washington D.C.

An analysis of Facebook API data of people who signed up to attend Unite The Right illustrates how attendees identify politically: By Friday afternoon tensions were already rising in Charlottesville as both white supremacists and their opponents began to descend on the area. Virginia Governor Terry McAuliffe announced he had activated the Virginia National Guard and encouraged people to avoid the rally.  Unite The Right speaker Chris Cantwell tried to hold a rally in a Walmart parking lot, which was quickly shut down by police after reports that Cantwell had brandished a firearm.

After police made them vacate Walmart property, Cantwell and his associates moved to McIntire park.

By the afternoon police had erected barricades and had a presence in Emancipation Park. One Unite The Right attendee took to Twitter to complain about anti-hate messages left in chalk in the park.

Local establishments have been displaying posters denouncing the Unite The Right event, choosing to remain open “in protest.” Racist messages have been left at area businesses; and churches have also reported receiving threats.

In the evening, reports emerged that white supremacists plan to have a ‘torchlight vigil’ on UVA campus at 9:30 PM. The vigil was planned as a ‘surprise’ but details were leaked online by an anonymous source.

In addition to opposition from locals, both anti-racist activists and Unite The Right organizers have stated they expect counter-protesters to number in the thousands.

Unicorn Riot will be on the ground providing direct coverage of this weekend’s events in Charlottesville. Please consider making a tax-deductible donation to support our continuing coverage: 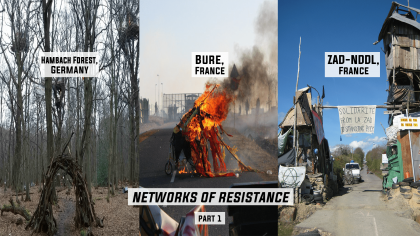 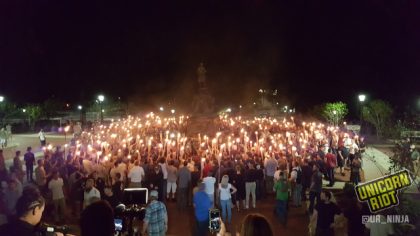