Minneapolis, MN – As the Trump administration doubles down on the United States government’s Islamophobic policies, resistance to those policies widens. Over the past couple of years, Muslim youth from the Young Muslim Collective (YMC) in the Twin Cities area have been organizing public forums and events educating the community about the negative effects of the government radicalization/surveillance program called Countering Violent Extremism (CVE).

The Young Muslim Collective, along with the Minnesota Council on American-Islamic Relations (CAIR-MN) and Boston’s Muslim Justice League, hosted a ‘Resisting Surveillance Forum‘ on Friday, October 13 at the University of Minnesota’s Willey Hall. Unicorn Riot covered the forum.

Watch the forum in two videos below:

In April 2017, Unicorn Riot spoke with Mike German, an ex-FBI agent and fellow in the Brennan Center for Justice’s Liberty and National Security program, after the CVE panel organized that month by the YMC and CAIR-MN. Watch the video below for more information on the CVE program:

The CVE Panel 2017 was focused on decoding CVE’s radicalization policy and the impacts that the CVE program is having on the Somali community.

Somali community members feel as though they are discriminated against and stigmatized for being Muslim, as well as for being Black in America. For the Somali diaspora, since the civil war of the early 1990s, Minneapolis has become home to well over 25,000 Somalis, with many thousands coming in 2015 and over 700 resettling in Minneapolis just last year.

During the late 2000s, before ISIL, dozens of Somali youth (teenagers to early twenties) traveled back to Somali and took up arms with Al-Shabaab in the ongoing civil war; many of these young people have died, while some are in prison in the USA and others remain at large. This produced major negative implications for the local Somali community: as families and friends were losing their loved ones, they were simultaneously being subjected to a high dose of government agency questioning and surveillance, as well as further pressure on their religious activities.

In efforts to get closer to the ‘radicalized ones’ and prevent what the government views as extremist or violent behavior or ideas, the government has used an assortment of programs. The CVE program is one of those, and has been giving large amounts of grant money to community-based organizations seeking community solutions to prevent radicalization into violent extremism or recruitment into terrorist groups.

The money comes with ‘shared responsibilities’ and the need to report back to the government about any perceptions of radicalization using what Mike German calls “unscientific indicators” to tell “who’s dangerous and who’s not.” The indicators include religious practices and political grievances.

One of CVE’s predecessor programs, which the United Kingdom government calls “Prevent”, has been described as infringing on freedom of expression, and is self-defeating by alienating the subjects it targets from society. Its supporters believe it operates in a “pre-criminal” space.

Mike German said that under the Obama Administration, the CVE was created out of numerous different ‘community outreach’ programs from many different government agencies that were “consolidated” in efforts to “unify them“, yet the agencies continued their own programming. For instance, German said,

“The FBI has continued and at one point started creating what are called shared responsibility committees, these were supposed to be these formal agreements they would make with community members, whether they are educators … mental health professionals or other health professionals, religious leaders, other community leaders, to sit on a secret panel and share information with the FBI about individuals in the community.” – Mike German

A member from the Minneapolis Public Schools described a plan to address CVE by monitoring students during school and after school:

The video above was spoken about and shown to the audience during the CVE Panel 2017. The event hosts spoke on how messages in media articles, editorials, and even from judges have controlled the narrative in such a way to make Somali folks a ‘suspect’ when they are at local stores, the Somali mall, the mosque, going to school, or even walking down the street.

The panelists spoke on the values instilled in them from their Islamic upbringing and how they have learned and experienced great things from their religion and from attending mosque. They also said the renewed stigmatization of their religion, coupled with the fear of radicalization, has affected their own family members and has made it all but unsafe to practice their religion in the United States.

Many other topics were spoken about in the CVE Panel 2017, which is worth viewing in its entirety and can be seen below. In the second video there is a question and answer session with the community as well as discussion on the local Minneapolis political scene, including information about the Somali American Task Force created to introduce CVE into Minneapolis.

Watch the full interview with Mike German below.

See our past coverage on the CVE program by visiting our November 2016 post Twin Cities Young Muslim Collective Holds CVE Forum, which also contains footage from the YMC CVE forum held that month. Also check out The Brennan Center for Justice, who have created Countering Violent Extremism (CVE): A Resource Page, filled with links from a wide variety of articles, research, and studies.

Watch the April 2017 CVE Panel below. 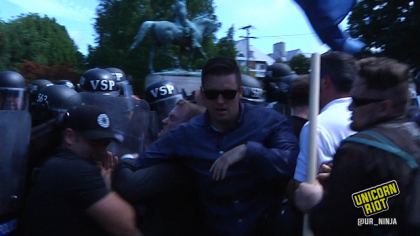 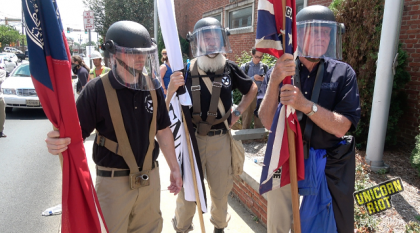 Groups Behind Unite The Right Sued For “Illegal Paramilitary Activity”